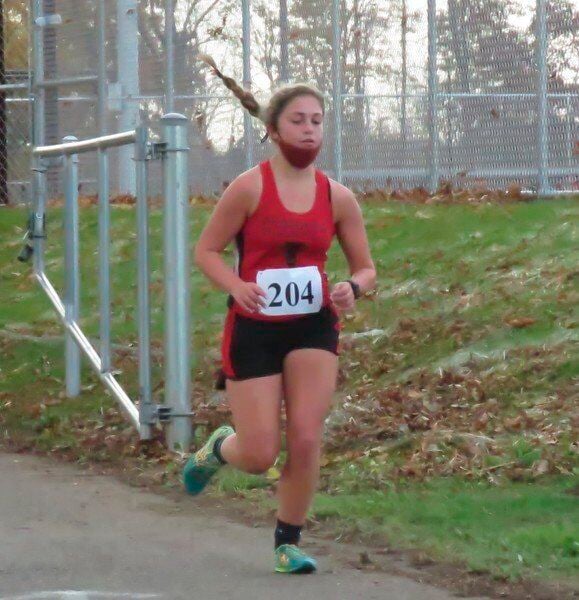 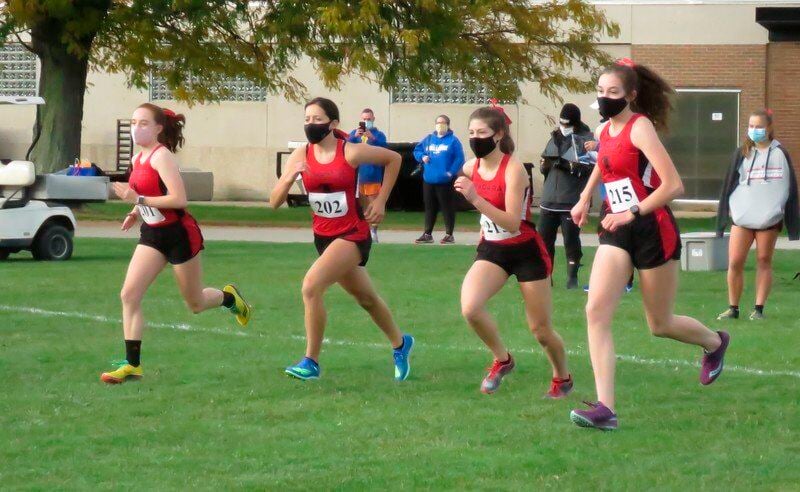 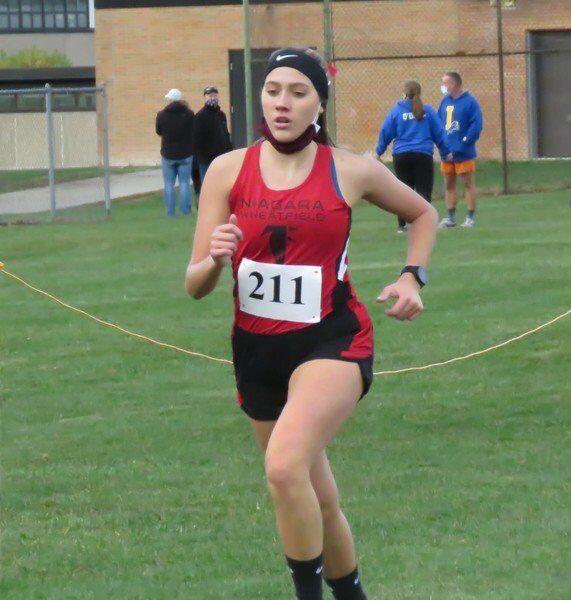 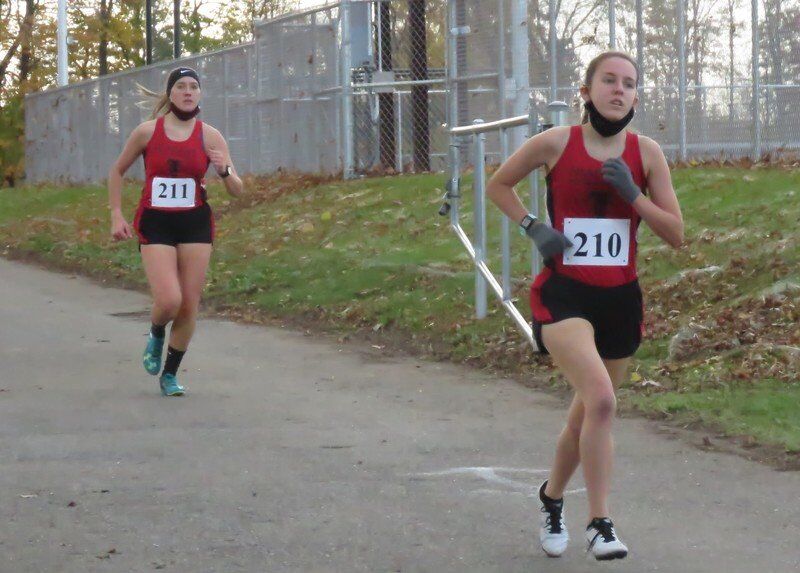 David Yarger/contributorNiagara Wheatfield's Mirando Gatto, 210, and Sarah Pawlow, 211, run near each other during last Tuesday's meet versus Lockport. 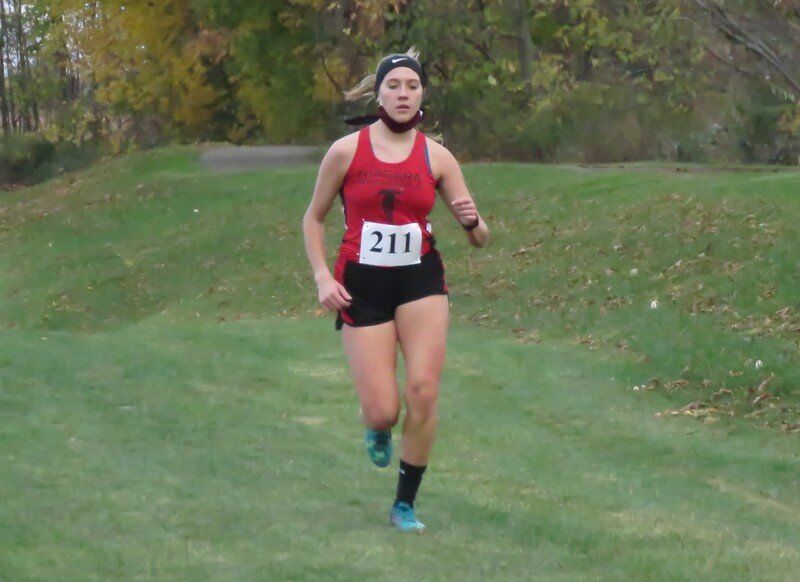 David Yarger/contributorSarah Pawlow, the lone senior this year on N-W girls cross country, comes around the back end of the trail during last Tuesday's meet versus Lockport. 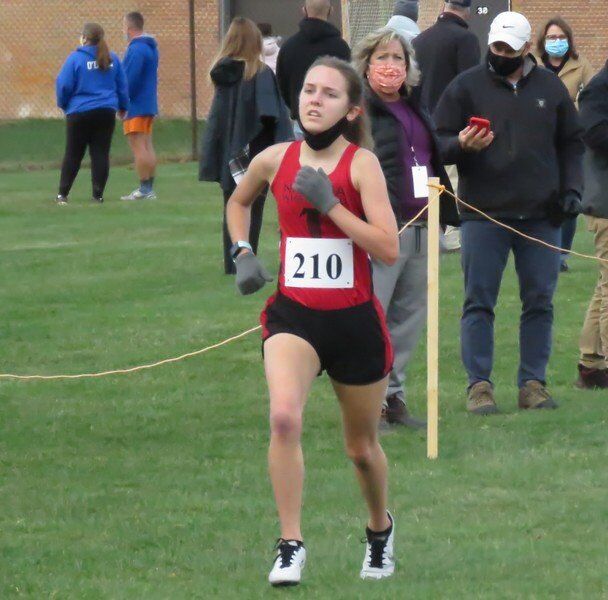 David Yarger/contributorNiagara Wheatfield's Mirando Gatto, 210, and Sarah Pawlow, 211, run near each other during last Tuesday's meet versus Lockport.

David Yarger/contributorSarah Pawlow, the lone senior this year on N-W girls cross country, comes around the back end of the trail during last Tuesday's meet versus Lockport.

Let’s be honest, distance runners sometimes do not get the respect they deserve. Cross country is a sport that asks a lot from the daring competitors that choose to take the trek. A lot of endurance and determination goes into the sport, as many try to run over three miles as quick as they possibly can.

In the Niagara Frontier League, while there are many girls cross country teams that have a steady stable of distance runners, the Niagara Wheatfield Falcons have a consistent top-eight that is hoping to make history — that is, this year and for years to come.

Coach Meghan Smith posts a lineup that is one of the youngest in the area, with a top eight that includes just a lone senior, four sophomores, two ninth-graders and one eighth-grader. At the moment, with such a young squad, the Falcons are an appealing 5-1. Success with such a young roster is tough to accomplish, and it shows that, just possibly, big things are ahead for the team.

“This is a very hard-working group of girls. (Sophomore Miranda) Gatto was not on my radar as this is her first year running XC. She was a nice addition, as the loss of Victoria (Achtziger-Hughes) as our front runner would hurt us a bit. Hayden (Geibel) was plagued with an injury last year, so to see her running up front and healthy is an added bonus," Smith said. "Our league is tough, and to only have one loss so far to Lockport is something special. We have depth and that is what is really helping us be competitive."

The youth of the roster is something that will hopefully provide continued success for years to come. Underclassmen in the top eight include eighth grader Jillian Davies, freshmen Alexis Bissel and Olivia Robinson-Barbarossa, and sophomores Gatto, Geibel, Amanda Snowberger and Elaine Raglow-Defranco.

The successful season is a good sign for the Falcons, as the team lost its top runner from a season ago in Achtziger-Hughes. The alumna always finished on or around the top of her races. Losing that key piece could be detrimental to many teams, and while Smith agreed losing her top runner hurt, she added that the depth of this year’s team has helped lighten the departure a bit.

“We knew we were going to have to step up and fill the gap that Victoria left. The girls worked hard over the summer and put in the miles individually," Smith said. "We could not meet as a team, do the cardio classes we do during the summer or lift. They knew they had to keep working and they did. Having the team work so hard has helped us be competitive with some amazing competition this season."

There is a lot to talk about when discussing the youth of the roster, but one can’t forget the lone senior of Smith’s top eight, Sarah Pawlow.

As the only senior in the top eight, Pawlow has the task of being a role model and leader for the younger runners. Pawlow has ran on the varsity team since eighth grade, so her experience over five years has been key in leading the Falcons on the right trail.

“With this season and the COVID restrictions, we have not been able to do the ‘extras,’” Smith said of offseason trainings. “No pool workouts, no lifting, no runs at state park, no spaghetti dinners, etc. Sarah has taken her senior year and the title of captain and has led this team positively forward. She's a tough, hard-working runner and makes the younger kids come together to fight for the wins. We always say, win as a team, and we lose as a team.”

In the end, Smith admitting losing Pawlow this summer will hurt, but she believed the team would be prepared for seasons without her due to the senior's positive leadership.

“I am very excited for what the future holds for our team. Losing Sarah at the end of this season will be tough, as she's a great leader and runner. But, I think the young girls are prepared to step up and make NW proud,” Smith said.

With sports starting at the push of a button this fall due to the unknowns of the COVID-19 pandemic, a big thing for the Falcons has been health. While the team has trained hard to get to where it is, the biggest thing for Smith and the Falcons has been focusing on sticking together as a team through practice, recovery and racing.

“This season has been like no other. Training has been tough, as we have been racing every Tuesday and Thursday. Keeping them healthy has been a main concern," Smith said. "Workouts and races have been tough and they have done everything with a positive attitude. They warm up and cool down together, they support each other. It has been amazing to watch these girls grow as runners, people and leaders."

A big-time goal for the program has been winning an NFL title. The NW girls XC team has not accomplished the feat since 1993. Sitting at 5-1, with a match versus Kenmore East and CSAT remaining, in addition to the NFL Meet on Friday, the hopes and dreams of hoisting the first title in 27 years are alive this year.

While a title would be great, Smith gave credit where it was due and said it’s great to hear her program up near the top with some of the NFL’s best.

“A title has been our goal. We may only have one loss going into our last meet and NFL Championships, but there are tough programs with great coaches that we have to go up against. Just to be mentioned with Lockport, Grand Island and Ken West is impressive," she said.

"The thing about XC is anything can happen when we all run each other Friday. It will be exciting. We are prepared and hopefully our front runners can break up some teams and our depth will help us. We have a hard-working young team and I could not be prouder of this group."

The Falcons’ final sprint towards a league title continues with their last NFL regular season meet at 4:30 p.m. today versus Kenmore East and CSAT. The NFL Championship follows at 5 p.m. Friday at Lewiston-Porter High School.