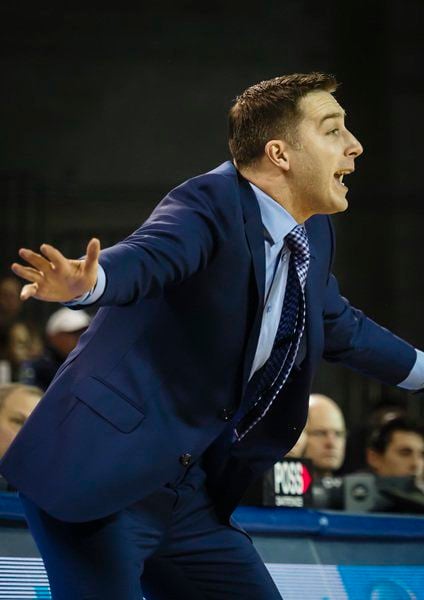 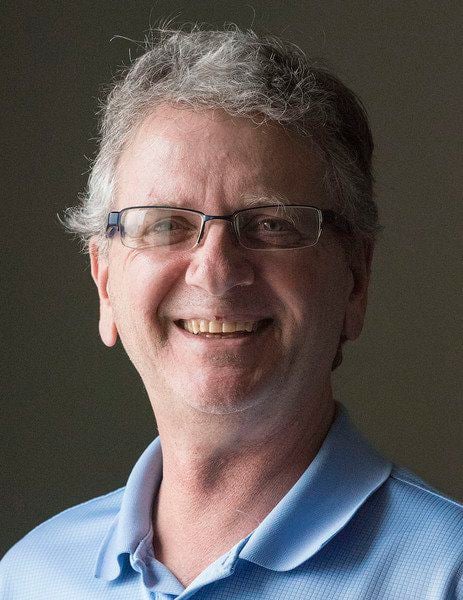 Greg Paulus is, above all, a family man. You can tell it from the moment you meet him.

Paulus, the Niagara men’s basketball coach, walked off the floor at the close of practice Wednesday afternoon at the Gallagher Center, where his wife, Megan, and his 18-month-old son, Preston, were waiting.

He grabbed his little boy and tossed him in the air, his face glowing. You could see this was the highlight of a father’s day. Moments later, in his office, Paulus grabbed a basketball and showed a visitor his son’s white painted baby handprints on the ball, saved for posterity.

Paulus is the product of a large family himself, the fifth of seven children who grew up as a multi-sport star in Manlius, just outside Syracuse. His four elder siblings were all boys (he also has a younger brother and sister), which made for some pretty fierce competition in the Paulus household.

“You learn a lot because you’re always chasing them around and trying to keep up with them,” he said.

“I think you learn so much from family, which is so important to me. My son comes to practice and it’s a big part of who we are and who I am. My best friends are my brothers. They were the best men at my wedding.

“So what I learned from my parents was the values of hard work and teamwork. They made so many sacrifices for us growing up. Seven kids in 10 years, I don’t know how they did that. But it was an incredible example for me to see every day.”

Paulus was the star athlete, a kid who excelled in both football and basketball at Christian Brothers Academy. He had a choice to play either at the highest levels of college sports. Notre Dame wanted him in football, Duke in basketball. You can imagine the list of college suitors.

It’s the rare young man who is recruited to play quarterback at Notre Dame and point guard at Duke. That’s essentially the two cerebral positions at the most celebrated programs in each sport. Looking back, it’s easy to see that Paulus was destined to be a leader.

“I’ve always wanted to be in the position where you can have an impact,” he said, “and those are the positions where each time down the floor, or each snap you get, you have a chance to see what they’re doing, and how can we counteract that.”

He couldn’t play both. Imagine an 18-year-old faced with that choice.

“It came down to first love,” he said. “Basketball. I loved football, which is why I went back and played that fifth year at Syracuse (for Doug Marrone). But growing up, I always wanted to play college basketball.”

How could he turn down Duke, and a chance to play for one of the best coaches ever to wear a whistle? When Paulus showed up in 2005, Mike Krzyzewski was already a hoop legend, with three NCAA titles and 10 Final Fours to his credit. “Coach K” was named U.S. Olympic coach soon after Paulus arrived on campus.

The academics felt right. He was looking for a challenge. He quickly found out that he had a lot of work ahead, and that he wanted to coach one day for a living. He had the best model in Krzyzewski, who handed each freshman a binder to keep notes on everything they learned.

He kept one all four years at Duke. There are practice notes, individual drills, scouting reports, even inspirational quotes and mental tips.

“I always had a passion for basketball and coaching,” Paulus said. “So I still have them, all four years. Each year that I’ve coached, I have one, too.

“(Krzyzewski) is at his best every single day. He brings the passion. You would think that he hadn’t won five national championships or been to 12 Final Fours. He still works at it, and is as hungry and passionate like he’s 35 years old and this is his first opportunity.

“That’s one thing I take with me every day — not just as a basketball coach, but as a father, a husband, a person, a leader …. to have that type of passion and that type of standard.”

Paulus had four good years at Duke, though the Blue Devils never reached the Final Four during his time. He started exactly 100 games, averaging 8.6 points. By far his best game in an NCAA Tournament was a 25-point outing in Duke’s upset loss to VCU in Buffalo in 2007.

He lost his starting job the his final season, which he took in stride as a captain and leader. He played that one year as quarterback for Syracuse in 2009 in Marrone’s first year rebuilding the program. Then he embarked on his life’s ambition, to be a basketball coach.

It has been an eventful ride. A college team is like an extended family, but at times it can be a dysfunctional one. Coaches have to deal with crisis, change, controversy. Paulus had encountered them all in what has already been a 10-year career.

He was an assistant for a year at Navy in 2010-11, then spent six years at Ohio State under Thad Matta. The Buckeyes made a Final Four and reached four straight NCAA tourneys. But they missed two years in a row and Matta, beset with health issues, was let go, along with his staff, in 2017, shortly after Greg and Megan were married.

Paulus wound up as an assistant at Louisville, which was reeling from the recruiting and sex scandal that toppled Rick Pitino as head coach. David Padgett, the interim coach, had to assemble a staff in a hurry. Paulus was hired two weeks before the opener, an experience he would re-live just two years later at Niagara.

“When you come into a situation that late, and there’s so many things you can’t control, things you had nothing to do with, you just try to control what you can,” he said.

Padgett and his staff were let go after the 2017-18 season. Paulus took an assistant’s job at George Washington under Maurice Joseph. That staff was fired after a poor season — soon after Preston was born.

So when Paulus became an assistant under Patrick Beilein in April of 2019, it was his fourth coaching job in a span of 22 months. He had gone progressively from power conference programs to one of the worst teams in the MAAC. You would think he was discouraged.

“I was so thrilled to come to Niagara and be part of building this. This is home. We have family in Syracuse. It was a chance to come back and be close to home."

As it turns out, it was also his big chance to be a head coach. Two weeks before Niagara’s opener, Beilein resigned abruptly, citing personal reasons. The university gave Paulus the interim tag, then removed it before the opener, confident he was the right man for the job.

Paulus, who is 33, said his main concern was his players. The Purple Eagles were a young, relatively inexperienced bunch who must have been rocked by Beilein’s departure. But Paulus spoke to all the players and assured them the program would be fine. They didn’t doubt him

“No, not at all,” said sophomore Marcus Hammond, who leads Niagara in scoring at 13.5 a game. “When he was the assistant, he was always talking to us, motivating us, teaching us on things we might have messed up. He was just a great guy. When he got the job, it was like, ‘All right, G, we’re following your lead now.’”

The Purple Eagles are, as Paulus admits, a work in progress. They’re the smallest team in the nation, and last of 350 Division I teams in rebounding. They have only one player over 6-foot-2 in the starting lineup. At times, you wonder how they ever manage to win a game.

But while they’re 7-14 overall, they’re 5-5 in the MAAC, only a game out of first in the loss column in a balanced — some would say weak — conference. It’s a testament to Paulus’ ability to maximize the talent on hand and to keep his young players believing they can win any game.

Last Friday, they were dreadful in a 19-point home loss to Marist. The Purple Eagles entered that game sixth in America in fewest turnovers and gave it away 16 times. On Sunday, they stunned MAAC leader Quinnipiac, 75-59.

They turned it over just three times and forced 20 turnovers. They were out rebounded by 15. Maybe it was a fortuitous stroke, having Paulus forced to be the head man. Niagara is limited athletically, but they play with the verve, vision and opportunism of a great point guard.

His mentor, Mike Krzyzewski, would no doubt approve. “Coach K” has said Paulus was born to coach. Niagara has waited a long time for a return to hoop prominence. It’s been 13 years since Joe Mihalich took them to their last NCAA Tournament.

“We’re in the infant stages of creating that culture, that foundation,” Paulus said, “and we’re still working on creating that identity. But I love the progress that we’re making.”

The basketball in his office has an infant’s handprints. In time, Paulus hopes to put a winning imprint on the program. Maybe, at long last, he has landed in a place he and his family can call home.