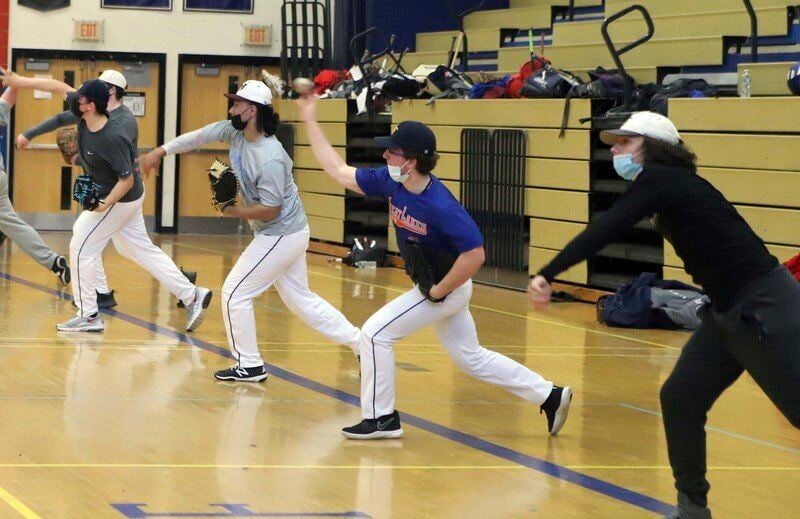 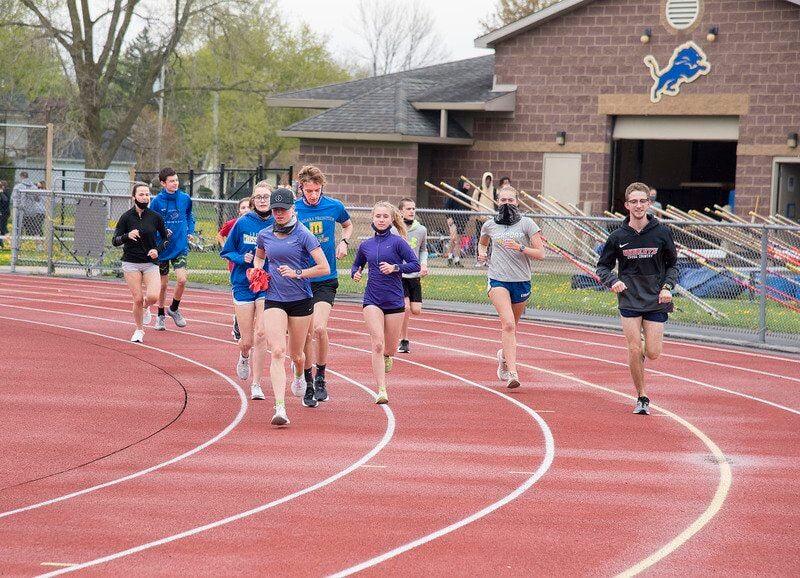 Distance runners take a few laps on the first day of Lockport High School track practice. The Lions opened up practice Monday, clearing the way for the first spring sports competition in Western New York since 2019.

Distance runners take a few laps on the first day of Lockport High School track practice. The Lions opened up practice Monday, clearing the way for the first spring sports competition in Western New York since 2019.

The coronavirus pandemic claimed a lot: time with family and friends, unrestricted travel, indoor movie theaters and more. But the void of spring sports hit home too.

Due to last spring's lockdown, Monday marked the first time spring sports programs in Section VI were able to prepare for competition since the 2018-19 school year.

"I'm excited to be back. It's good that we're having a season this year and that we're not getting nothing at all," said Lockport thrower Skylar Pointer.

A NYSPHSAA competitor in both the weight throw and shot put, Pointer has not been able to compete with the Lockport track and field team since the 2019-20 indoor season. The senior was able to train at her home during quarantine, though, as she built her own electrical tape throwing circle in her basement.

Once she was able to do so, Pointer went out and threw on her own. It was definitely needed for the senior, as she looks ahead to her final high school season before throwing for Division II College of Staten Island.

"I hope to throw better than I have before, especially with not having a season the previous year and not having an indoor season," Pointer said. "Just hoping to hit the marks I want to hit and then further on my throwing into college."

Lockport track and field coach Tim Willett is excited to be back and he has his full staff returning with Miles Patterson, Matt Vermette and Pat Seidel. But having worked with some kids as recently as the fall with cross country and having limited contact with others since the spring of 2019, Willett is taking on a different approach to the season.

"I definitely have to treat everyone a lot more individually. So we've got ... cross country kids, they've been working through the winter. They thought they had an indoor season," said Willett, whose boys track squad has taken the last eight Niagara Frontier League titles. "So they were training, they kind of kept training. Those kids today, they're doing a workout, and then we've got some kids that are taking it easy. So we're all different speeds today and that's kind of where we're gonna look at it."

The constant change in the 2020-21 school year is nothing new, so Willett is going with the flow due to the season schedule currently being unsettled. Willett shared that the NFL athletic directors will be meeting today to get more pieces of the schedule together. But even at the sectional level, in terms of figuring out the times and places of events like the class and divisional championships, the Lions' head coach is waiting to see what the plan is for those meets.

Niagara Falls baseball coach Rob Augustino is also back, as he's brought Falls alumni on staff, like former St. Bonaventure baseball player Brad McLeod, Jim Hutchinson and David Yarger, seen in these pages as a GNN Sports freelancer. Like many coaches in Western New York, Augustino is just getting familiar with this year's Wolverine crop.

One nice aspect of the spring is Augustino has the 2020 spring tryouts as a point of reference as to who could contribute on this 2021 squad. He's really excited to work with this "great group of kids" that has student-athletes whose primary sport is baseball.

But with the unknowns of figuring out the roster and best communicating with each specific player, there's a laundry list of items for Augustino to implement.

"Seeing them and getting them into our system of ... the plays we like to run, different signs that we use, different vernacular, the verbiage, how we say things, we didn't have a chance to do all that," Augustino said.

"It kind of puts us behind the small stuff like bunt coverages, first-and-thirds, rundowns, all those type of things ... I feel like we're a little bit behind and it's weird now. Because not only are you behind, when you start a normal year, you're starting the first Monday after the first Saturday in March and you're really not playing games until usually the end of March, beginning of April."

The spring sports season will not be as speedy as this past fall sports II season, as the former is slated to go nearly two full months until June 30. But unlike a traditional season where there's roughly three to four weeks of preseason camp before game action, the Wolverines — among other sports in WNY — will be competing as soon as next week with NFL baseball opening up May 13.

"That puts a little bit of pressure on us as coaches and as the team where we can't sit there and do first and thirds this week, a couple next week, we'll do a couple the week after that," Augustino said.

One of Augustino's seniors will be Aaron Kifer, who plans to pitch and play first base this season. Although it's been two years, Kifer is one of Augustino's most familiar faces after playing up on varsity in 10th grade.

"Being back feels great, especially with the guys we have," Kifer said. "It's a great atmosphere, really good coaching and I'm excited to play again."

Kifer, who was able to stay on the travel circuit with the Niagara Jr. Thunderwolves' showcase roster, was still able to improve in the pandemic. Thankfully, the senior was able to play in Jeff Ziemecki's program while getting into the weight room whenever possible.

Niagara Wheatfield lacrosse coach Vince Schiffert also opened up practice Monday, as he shared how much of a challenge it'll be getting his group up to speed after most of them last played on JV. But being able to coach again, Schiffert was pleasantly surprised with how things went.

"I was curious about how that was going to go. I haven't coached in over a year and it wasn't like I missed it," Schiffert said in a post-practice text message.

"Your life fills in that gap with other important things. I was a bit apprehensive about it. After practice got rolling, the kids enthusiasm and intensity got me fired up! I was impressed by how much some of those young guys improved on their own the past year. Backyard lacrosse and their hard work during COVID has definitely helped. I'm excited by what I saw on day one."