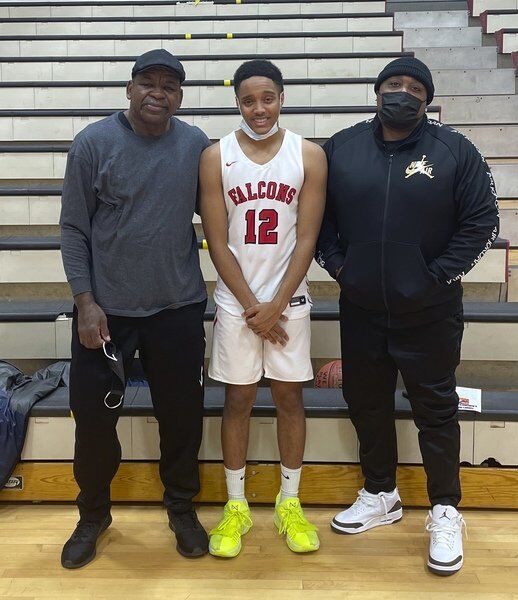 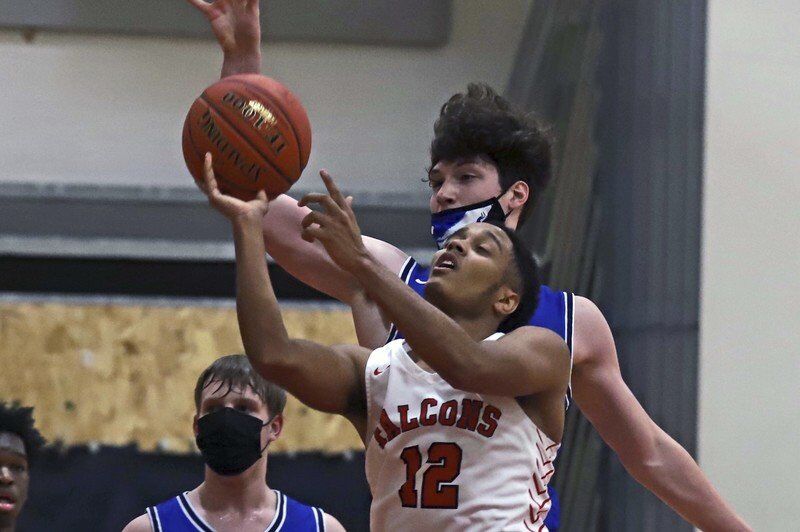 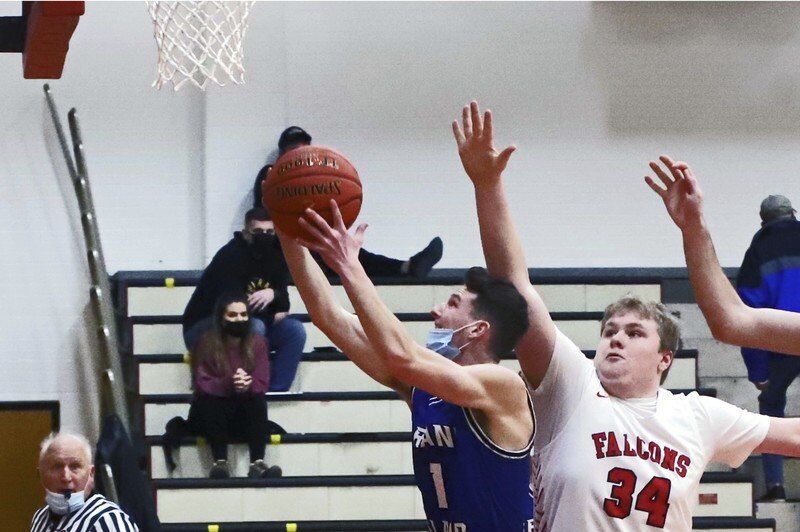 SANBORN — Wednesday night belonged to TJ Robinson in more ways than one.

The junior guard was stellar, guiding Niagara Wheatfield boys basketball to a 60-46 comeback win over Grand Island at Niagara Wheatfield High School. The Falcons (5-3, 4-3 Niagara Frontier League) pushed their winning streak to four, and they did so while honoring Robinson's late mother, Liz Holton, who died Oct. 20, 2020.

But Robinson and his backcourt brother Xander Fletcher would heat up from there. Flether, the lefty point guard, turned things up in the second half, scoring all 16 of his points after the break, to go along with seven total assists.

Behind Fletcher and Robinson, Shawn Watson (12 points), Wyatt Cooper (8 points) and Thomas Jessie (8 rebounds), NW would outscore GI 37-20 in the second half.

Robinson said the chemistry has come together for the Falcons at this point of the season, as their four-game winning streak followed a 1-3 stretch to start the year. Being a wingman in one of Western New York's top one-two punches alongside Fletcher, the junior talked about what it's been like seeing his PG's growth thus far.

"It's amazing, we've been training together all summer and in the driveway," said Robinson, as Fletcher entered Wednesday's tilt averaging 23.2 points, 6.1 rebounds, 3.4 assists and 3.1 steals per game. "We just be having fun, you know. I just love every second of it."

NW head coach Erik O'Bryan said Robinson's effort on both ends Wednesday showed the type of kid he is outside of his basketball talents. O'Bryan lauded the Robinson and Holton families for how they've raised TJ and the type of character he posses, as he's battled emotions all season after losing his mother.

The pandemic made this situation far worse. The time Robinson needed basketball the most — as well as his teammates and coaching staff — everyone was shuttered away to keep safe. As Holton's condition worsened, that dawned on O'Bryan and he saw how it was affecting Robinson.

So much so, the All-NFL talent nearly gave up the sport he loves.

"The mental health thing is real with high school athletes with no sports. And then when this happened in October, it was crushing," O'Bryan said.

"Liz is the strongest woman I ever met. She's taught me so many things in short time that I knew her. And I see TJ, I think this is helping him because we are practicing every day and he's with the guys. I see the light coming back again, he's starting to get his legs back, he's starting to get a feel for the game and wanting to play again."

O'Bryan has really enjoyed seeing his young group put their arms around Robinson, as they also grow in this rapid-paced season. Especially in a game like Wednesday's where NW shook off early adversity to bounce back.

Once the ball screens got going — as well as NW applying their own trapping zone — Fletcher was able to create for himself and others to spark the comeback effort. Coach O'Bryan spoke glowingly of the sophomore PG as well, sharing how coachable he his and even though he was frustrated with his own first-half play, he did not let that show or let it hamper the team's performance.

The Falcons' head man believes Robinson's experience as being the young guy getting extra attention last season has helped the junior bring Fletcher along in his breakout season. O'Bryan knows team's are gonna throw the kitchen sink at his two standouts in the backcourt, but he's excited for how others have stepped up in the roles because of it.

"We fly with those guys, but I think it's evident every game people try to stop them two and they realize we have others too," O'Bryan said. "Some role guys that can actually score too. So it's a fun team and we're just gonna keep riding the wave and we've got a tough one on Friday night."

GI head coach Chris Simpson thought his Vikes played great in the first half before NW's second-half surge pulled things away. He knows how dynamic Robinson and Fletcher are, but he complimented the Falcons for their team overall.

Working through his first season as head coach after serving in the Vikings program as the JV coach, Simpson has made sure to keep his guys' positivity up even in their rough stretch in the NFL.

"We've got a lot of good kids on our team and they're friends, they hang out, they laugh, give their stories to each other," Simpson said. "But even though it's tough losing a bunch of games, they're having fun, they're hanging out with their friends. Our first year together, that's kind of what we're more worried about. Trying to show the guys to work hard, but also having a little bit of fun."

Vikings PG Logan Sionko also chipped in to tie a team-high 14 points, as he's now less than 100 points away from joining the 1,000-point club. The senior co-captain was glad with his team's effort but knows not finishing things in the second half was the major difference.

As one of GI's leaders and their go-to scorer, Sionko has also been preaching similar messages to coach Simpson's.

GI gets back to it 7:30 p.m. Tuesday when North Tonawanda comes to town. NW will be back in action 7:30 p.m. Friday at Kenmore East.