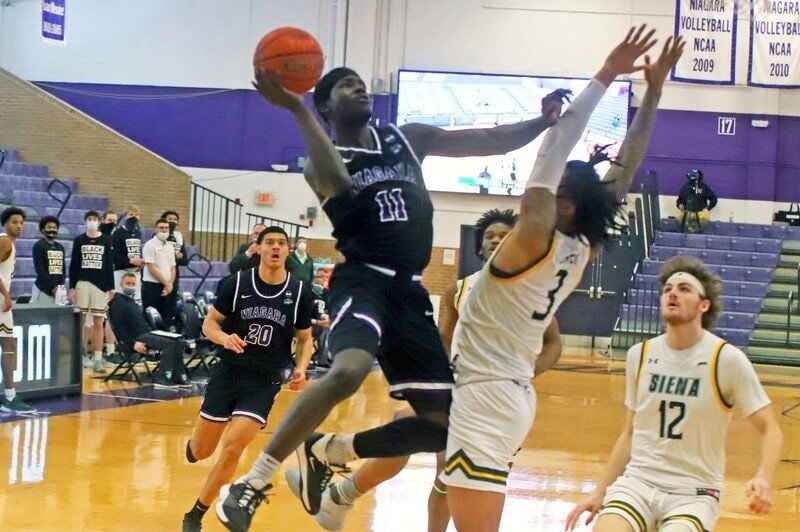 Paul Battson/contributorNiagara junior Raheem Solomon puts up a shot over the hands of Siena's Manny Camper in Sunday's game at the Gallagher Center. 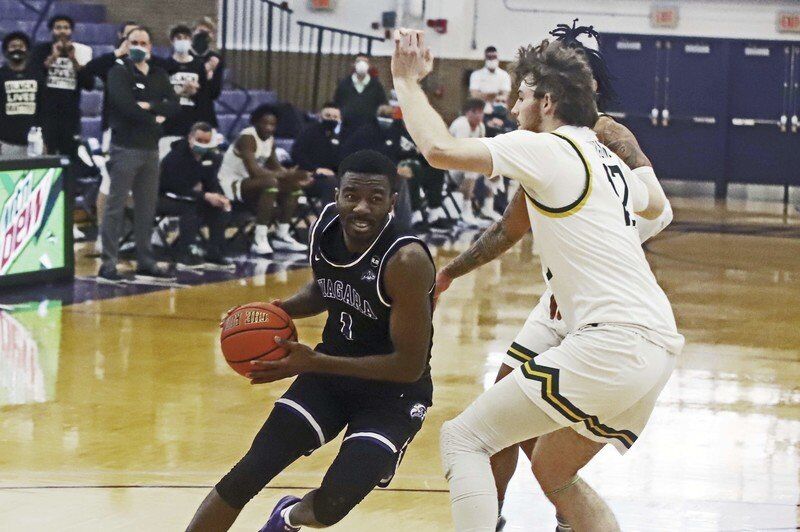 Paul Battson/contributorNiagara senior Kobi Nwandu works the ball inside Sunday during a loss to Siena at the Gallagher Center.

Paul Battson/contributorNiagara junior Raheem Solomon puts up a shot over the hands of Siena's Manny Camper in Sunday's game at the Gallagher Center.

Paul Battson/contributorNiagara senior Kobi Nwandu works the ball inside Sunday during a loss to Siena at the Gallagher Center.

Niagara had a pretty good look at a weekend sweep at Siena, the team picked unanimously in the preseason by the coaches of the Metro Atlantic Athletic Conference to defend last year's title.

The Purple Eagles were also only a bounce or two from being swept.

Eighty minutes of basketball at the Gallagher Center showed little separation between Niagara (8-10, 7-9 MAAC) and the Saints (9-3, 9-3), who have the best winning percentage in the MAAC but sit second in the standings due to this season's COVID-19 seeding. Because some teams have missed most of the season due to COVID-19 pauses, standings are determined by total conference wins. Monmouth (10-7, 10-6) is in first place.

"I loved our competitive spirit," NU coach Greg Paulus said after Sunday's 68-66 loss, which gave his team a weekend split. "I thought that we stayed connected, stayed together. We talked about competing for the full 40 and that was something that we did, and that's something that I'm proud of."

The Purple Eagles won Saturday's opener, 64-62, thanks in large part to the Saints shooting just 1 of 14 on 3-pointers. While NU certainly gets credit for many of the misses, a few were of the open variety, like Jordan King's look with 7 seconds left that would have given Siena a late lead.

Instead, Niagara got a layup from Kobi Nwandu with 25 seconds that stood as the winner, aided by 3 of 4 free throw makes from Raheem Solomon to close out the contest.

NU trailed almost the entire first half Saturday but used a 9-0 second-half run to move ahead. Siena recovered, and the team's traded leads until Nwandu's make and King's miss in the final seconds.

Sunday, a similar story played out to a different ending.

Siena led most of the opening half again behind huge advantages in total rebounds (15-7) and offensive boards (10-1). But NU shot 62.5% from deep, with Justin Roberts, in just his second game back following a six-game injury absence, going 3 for 3 on 3s for 11 first-half points.

"We just talked about staying together, having great energy, enthusiasm, trusting what we do, and the group out there made an unbelievable run," Paulus said. "Multiple effort plays, defense leads to offense, really put us in a position there to give us a chance."

A 7-0 run gave Seina a 65-60 lead with 2:20 left, forcing another Niagara rally. Nwandu hit a layup, and after the teams traded misses, Siena's Jackson Stormo made 1 of 2 FTs. Solomon missed a layup, got his own rebound and was fouled but missed both free throws. Roberts was able to chase the FT miss into the left corner and tip the ball to Marcus Hammond, Niagara's first-team All-MAAC guard who had been held scoreless up to that point.

Hammond drilled the tying 3, and Siena called timeout with 12 seconds left. Manny Camper, who may be the favorite for MAAC Player of the Year at this point, drove to the paint and dropped an off-balance pass to Stormo, who dropped in the winning layup with 0.2 on the clock.

"It was a heck of a basketball game," Paulus said. "(I'm) really proud of the way that our team competed and fought, and congrats to Siena for making one more winning play down the stretch there to close the game out."

For now, Niagara has a scheduled week off before closing its season March 4-5 against rival Canisius at the Gallagher Center.

Paulus, whose team just returned to practice Tuesday following a 10-day COVID pause, said the Purple Eagles will use the down time to "kind of get back in the flow of it."

NU also has two games at Iona that remain "TBD" in the MAAC schedule. The Gaels had (8-5, 6-3) had three COVID pauses this season, and the conference is doing what it can get in as many games in as possible.

Paulus said he's taking "a wait-and-see approach" and will have his team ready to go if needed.

The Niagara women also finished the weekend with a split, theirs against Saint Peter's.

Sophomore guard Angel Parker, the Cardinal O'Hara product, played hero on Saturday, making a layup through contact at the buzzer. The shot tied the game, and the ensuing free throw gave the Purple Eagles (3-5, 3-5) an 83-82 win.

Parker's shot capped a wild 4th quarter during which both teams scored 25 points. It was a bit of redemption, as Parker had missed a pair of free throws and committed a turnover that allowed the Peahens (8-13, 7-9) to turn a 4-point deficit into a 2-point lead in the final 20 seconds.

NU will host second-place Quinnipiac at 4 p.m. Friday and Saturday.