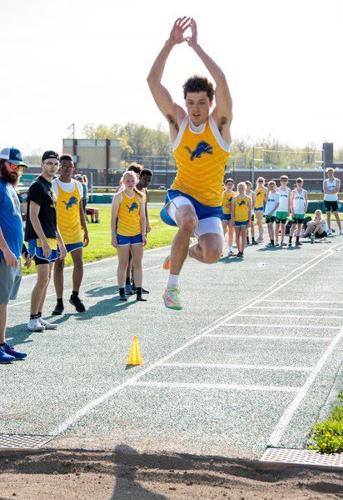 Lockport's Matthew Schaffert competes in the long jump at dual meet against Lewiston-Porter on Tuesday in Youngstown. 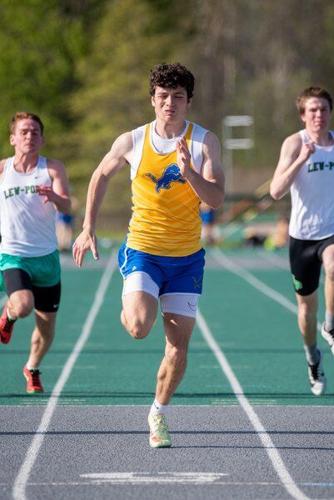 Lockport's Matthew Schaffert (center) bolts away from Lewiston-Porter's Robert Woods (left) and Corey Timkey (right) during the 100-meter dash in a dual meet on Tuesday in Youngstown. 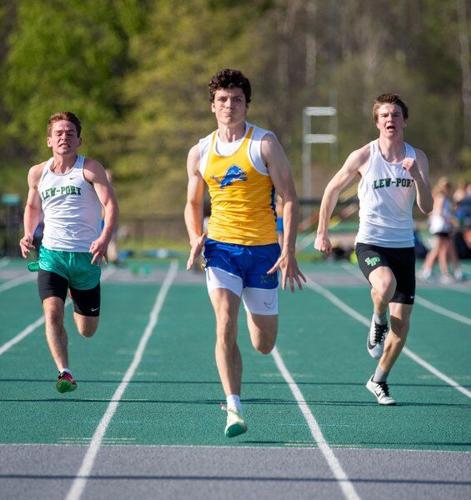 Lockport's Matthew Schaffert (center) pulls away from Lewiston-Porter's Robert Woods (left) and Corey Timkey (right) during the 100-meter dash at a dual meet Tuesday in Youngstown.

Lockport's Matthew Schaffert competes in the long jump at dual meet against Lewiston-Porter on Tuesday in Youngstown.

Lockport's Matthew Schaffert (center) bolts away from Lewiston-Porter's Robert Woods (left) and Corey Timkey (right) during the 100-meter dash in a dual meet on Tuesday in Youngstown.

Lockport's Matthew Schaffert (center) pulls away from Lewiston-Porter's Robert Woods (left) and Corey Timkey (right) during the 100-meter dash at a dual meet Tuesday in Youngstown.

As Matthew Schaffert veered across the middle, the cornerback was beaten. By the time Schaffert caught the ball in stride, there was no chance anyone was going to catch him.

When Schaffert saw the film of that 50-yard touchdown catch against Grand Island this fall, his thoughts drifted to what his speed could do on the track.

Schaffert lost an entire season due to the COVID-19 pandemic and when he finally got to compete last year, his body was weary from injuries and a condensed three-sport schedule. Yet he was determined to be the next Lockport stud in the sprints.

He partnered with his sister Samantha — now competing for Fredonia State University — to build a training program that would be rigorous even for a kid who has been lifting weights since fifth grade in an attempt to ensure his final high school season was spectacular.

With less than a month left, Schaffert has exploded to become one of the top sprinters and jumpers in Western New York, owning the top 100-meter time (11.07 seconds), the top long jump distance (21 feet, 5 1/4 inches). He is also part of a 4x100 relay team (44.96 seconds) that is currently No. 2 among Section VI large schools.

“I wanted to do something special,” Schaffert said. “I wanted to go to nationals, I wanted to get a scholarship and (Samantha) helped me so much, especially after the injury. She told me I could do something great this season and she was right.”

Schaffert was primed for track season last year, but he strained every ligament in his foot while suffering high ankle and foot sprains during basketball season. The injury was inflamed and Lockport decided to focus his efforts on the long jump and relays. Schaffert helped the Lions win the 4x100 and 4x400 relays at the Section VI Division 1 championships, but his long jump dipped from 20 feet, 1/2 inch at the NFL meet to 18 feet, 11 inches at sectionals.

Once his injuries disappeared and offseason workouts intensified to seven days per week, Schaffert could feel his talent percolating and see changes on the stopwatch.

It didn’t take long for Schaffert to prove himself, recording his personal-best 11.07-second 100 time and 21-foot, 5.25-inch long jump on April 30 at the West Seneca West Early Bird Classic.

Not only did Schaffert increase his top long jump distance by more than an inch, he dropped his best 100 time by 0.46 seconds. A half second may be an eye blink in real time, but it is an eternity in a sprint.

“It’s tough to focus and be so good in the field, but be so dominant on the track,” Lockport sprints and jumps coach Dan Langendorfer said. “He’s like a unicorn. He’s one of those athletes that we could put in almost any event and he could win it.”

The Lockport coaching staff was always confident in Schaffert’s ability and even felt his progression was at an ideal pace. The Lions typically have a standout sprinter and another in the holster to eventually slide into the top spot.

Collin Thompson waited behind Malik Brooks — a three-time sectional champion — and won sectionals in the 100 and 200 last year. Schaffert was the No. 2 sprinter to Thompson, so his ascent was unsurprising among coaches.

“The younger guys come up and they’re almost working in the shadow of somebody else,” Lockport head coach Tim Willett said. “… The guys always can look up to who’s at the top and work to be there. We knew Matt since he was a freshman and he was a good kid and a hard worker. We knew it was there and it was in him.”

Schaffert, who is committed to run at SUNY Cortland next year, is in the midst of the best season of his career, but his top performances may still be ahead. As the season advances, Schaffert will see deeper and faster competition, which pushes the entire speed of the race.

Lockport also designs its workout regimen to post the best times during the postseason. It’s a program Schaffert follows diligently. Each time he enters the weight room, Schaffert abides by a plan to strengthen the right muscles and is also careful to avoid too much strain to hamper performance in practice and meets.

“He’s very aware of what he’s doing in each meet and how he needs to prepare,” Langendorfer said. “He’s an incredibly intelligent kid. He knows what he needs to do, he’s got his routines and they’re all good. He watches what he puts in his body. He focuses on how much he works on his upper body, his legs, his core, so when it comes time to compete, he’s in peak condition.”

Excited but unsatisfied with his current performances, Schaffert wants to jump further than 22 feet to qualify for New Balance outdoor nationals. Langendorfer thinks it’s possible because he has edited his form to make sure his steps, takeoff and landing are consistent and his forward motion isn’t compromised.

Not only is Schaffert constantly jumping further than 20 feet this season, he also wants to become the fourth Lockport sprinter since 2015 — joining Lavette Warren, Brooks and Thompson — to break 11 seconds in the 100.

Schaffert ran 10.9 hand-timed against Lewiston-Porter on Tuesday, but the National Federation of State High School Associations rounds up to the nearest tenth before adding 0.24 seconds to be comparable with fully automatic timing.

Should Schaffert run faster than 11 seconds, history says it would be enough to capture a sectional championship, as more than one runner has broken 11 seconds at the Division 1 state qualifier twice in the last 10 years.

“Seeing Collin do it last year made me want to do it,” Schaffert said. “I want to win like he did. I want to carry that on.”