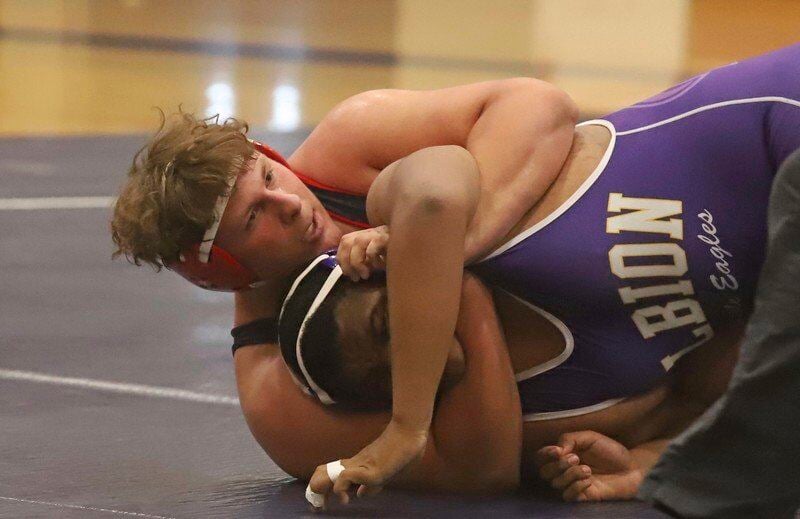 North Tonawanda's Chris Kinney puts a hold on Albion's Adonis Guzman in Thursday's 285-pound bout at North Tonawanda. Kinney has started the 2021 season out at 5-0. 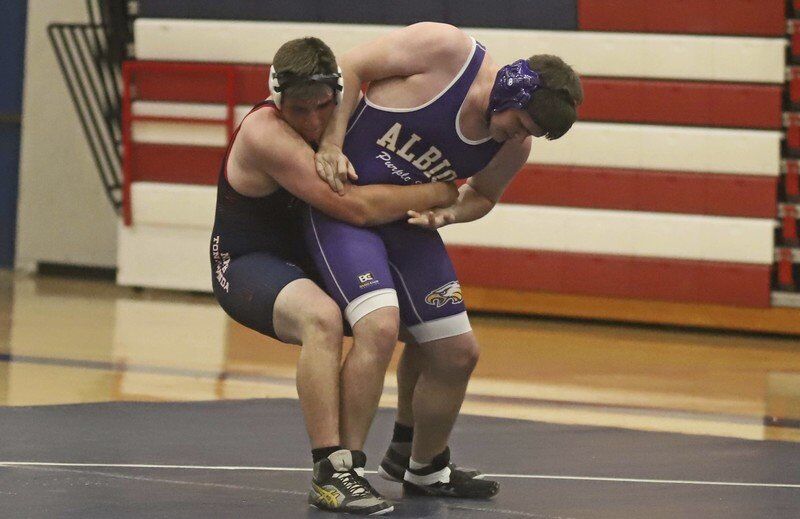 North Tonawanda's Chris Kinney puts a hold on Albion's Adonis Guzman in Thursday's 285-pound bout at North Tonawanda. Kinney has started the 2021 season out at 5-0.

NORTH TONAWANDA — It's been a long time coming for the Lumberjacks.

It'd be easy to say it's been a slow start for North Tonawanda wrestling after going 0-3 in its first three duals of 2021. But after taking on one of Section VI's toughest slates with Niagara Falls, Niagara Wheatfield and Starpoint to start the season, the Jacks got back in the win column, handling Albion with a 48-26 win Thursday.

"I'm gonna blame (Niagara Frontier League chair Joe) Scapelliti for that one. I'm gonna have to give him hell for that," NT head coach Wally Maziarz said jokingly in a post-match interview. "But no, we're excited. We're gonna try to hopefully finish out (undefeated). We've got Newfane still on the schedule, but I think if we wrestle to our potential there's no reason we can't beat any team left on our schedule."

The Purple Eagles have had some ups and downs themselves, as this was their first completed dual of the season due to low roster numbers. Because of that, Albion forfeited four weight classes in the action.

NT started out hot in the dual, taking pinfall wins in its first three bouts, led by Aden Spina (215 pounds), Chris Kinney (285) and Dylan Gagnon (126). The fourth and final fall for NT came from Donny Cleaver in the 145-pound match, as he was able to top Robert Dysard.

Albion was able to claim three wins in the match, with Amilcar Morales (138) and Alex Hafner (152) earning pins while Bryan Ortiz notched an 11-5 decision over Joey Pasiak at 172. Spina was the star of the night for the Jacks, though, as he took his second pin of the dual over Angel Cruz in exhibition action.

"I'm feeling good. I wasn't warmed up because we really rolled into it first thing for that first match," said Spina, who remains undefeated on the season at 7-0. "I thought I wrestled a little sloppy, but I got it done in the end."

Spina hopes to use Thursday's result as a springboard to more success in the latter portion of the Lumberjacks' slate. To get there, the senior knows the team keeping its conditioning in check will be key.

Maziarz was glad to get the first win of the season, especially for his seniors after the twists and turns of simply getting to wrestling here in the spring. He believes a win like this "elevates our swagger," especially seeing how far some of the kids have come during his three-year tenure as varsity head coach.

"I'm seeing the development now, and I know it's a short season, but a lot of these guys are getting some good, quality wins in and it's really good to see," Maziarz said.

"It's good for them to see all the hard work they put in really pay off. Guys like Spina, he lost to a kid in the Class (A) tournament last year, first round, got pinned in 30 seconds. Came out last week against Starpoint and pinned a kid in the second period. So he's undefeated right now, Chris (Kinney), he's undefeated right now. We've got some good individual things and good team things going on.

"We're looking forward to, hopefully, we can win out for the rest of the dual-meet schedule."

Getting back into the groove has been tough for Maziarz and his crew, notably due to the overlaps in the fall sports season II and spring sports schedules. Some of the kids had to split duties for the first few weeks of the season, while Joe Riley and Anthony Swan are doubling up with lacrosse throughout the spring.

Maziarz is looking forward to some of the meets coming up in the latter portion of NT's schedule. The Jacks are slated to host Lockport on June 15 right on the Jacks' home football turf. They're also trying to set up their traditional 'Battle for the Belts' non-league tilt with Tonawanda, which could become a 'Rumble on the River' with the idea of moving it to the Tonawanda Creek — the splitting line between the rival districts.

But even being back on the mat is the biggest thing. Maziarz is glad NT seems to be hitting its groove after three weeks of work.

"They're putting everything on the line for their senior year. And now that we're really starting ... we're in the third week, we're starting to finally get our shape up, we're finally starting to feel our moves again," he said. "It's difficult. It takes a little while to get back into the swing of things, but these guys are finally clicking now, so hopefully we've got some big things to come for the rest of the season."

NT will look to keep its momentum going at 5:30 tonight in non-league action at Sweet Home.