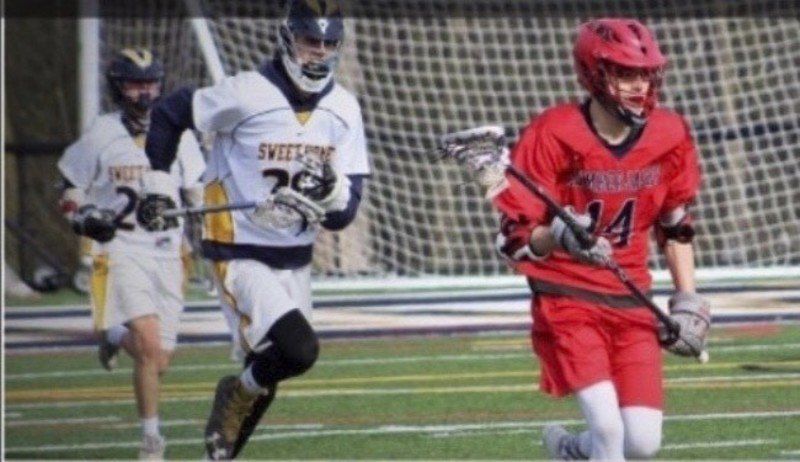 Contributed photo/Matt SledziewskiNorth Tonanwanda's Michael Marra (14) sprints downfield in the Lumberjacks' May 7, 2019 game against Sweet Home at Sweet Home High School. Marra's life was cut short this past week after a car accident Tuesday in the Town of Wheatfield. 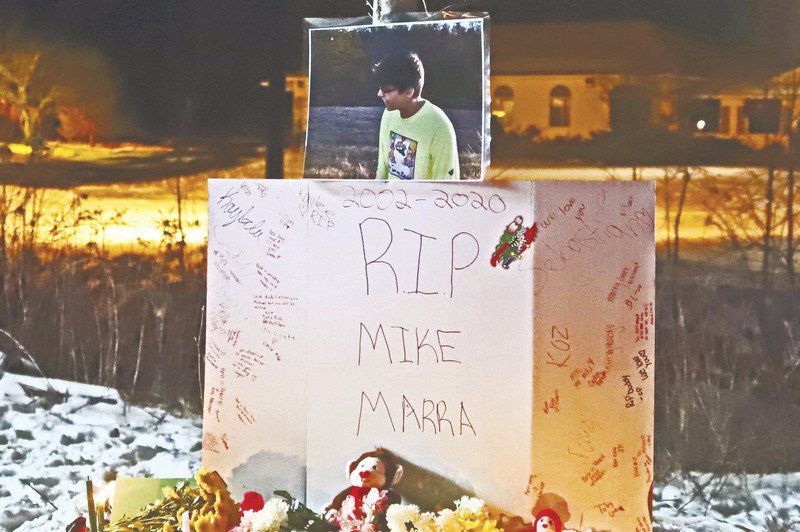 Paul Battson/contributorA roadside memorial signed in remembrance sits on Niagara Falls Boulevard, near Ward Road in the Town of Wheatfield. North Tonawanda senior Michael Marra was killed in a car accident at the location on Tuesday.

Contributed photo/Matt SledziewskiNorth Tonanwanda's Michael Marra (14) sprints downfield in the Lumberjacks' May 7, 2019 game against Sweet Home at Sweet Home High School. Marra's life was cut short this past week after a car accident Tuesday in the Town of Wheatfield.

Paul Battson/contributorA roadside memorial signed in remembrance sits on Niagara Falls Boulevard, near Ward Road in the Town of Wheatfield. North Tonawanda senior Michael Marra was killed in a car accident at the location on Tuesday.

When tragedy strikes, it calls for a community to come together.

Michael Marra, a 17-year-old senior and student-athlete from a family with deep ties to the high school, died Tuesday as the result of a car accident in the Town of Wheatfield, leaving the NT community at a loss as it remembers one of its own.

Michael's mother, Mary, works as a nurse for the school and his twin sister, Megan, is currently a senior. Michael is also survived by his father, Rocco, and older sister, Kaitlyn.

Marra was at some point a member of the volleyball, swimming and lacrosse teams in his Jacks' tenure, with the latter being the sport that Marra had planned to play his fourth varsity season of this spring.

Jacks lacrosse coach Matt Sledziewski said Marra had a respect for everything in life and that he was "a student of the game" on the field. Also mentioned as "a friend of everybody," Sledziewski added that Marra was driven by team success, not individual accolades.

"He really wasn't in it for any stat, he just did his job. Everything he was told to go and do, he did," Sledziewski said of Marra, who primarily played long-pole defenseman for NT. " ... Sometimes he'd be asked to play long-pole middy, there's been a time I even gave him a short stick and said 'I need you to do this.' And his answer was, 'Yes coach, whatever the team needs.' He was just one of those athletes that even if he wasn't the best at where you needed him, he'll do his best for the team. He wasn't an individual, at all."

Former NT lacrosse coach Mike Stauffer had two sons, Rhett and Chase, play with Marra and was one of many people to speak on the type of young man he was. He was quick to point out Marra was a very outgoing and happy individual, always having a smile on his face and making the people around him feel good.

Chase Stauffer, Mike's youngest son, had known Marra since preschool and was his teammate for three years. He said that he had never met a person more genuine and outgoing, and that Marra was someone you wanted to be friends with because of how "goofy, caring, and absolutely hilarious" he was.

After becoming alternates together as freshmen on the varsity lacrosse team, they were able to form a strong bond. As the years progressed, Stauffer saw the "warrior" that Marra became on the field and even admitted he hated battling with him every day. What dawned on Stauffer was all that Michael will miss out on to close his senior year, like lacrosse training camp, opening night under the lights, graduating with his twin and sharing a special moment together on senior night as two four-year varsity players.

"Most importantly, he won't live the full, incredible life Michael Marra was supposed to. My heart goes out to his amazing, loving family, as do my prayers always," Chase said via text message. "Another thing that some of us seniors agreed on was that no one will wear his No. 14 this season. We plan on getting helmet decals and warmup shirts to honor him. There isn't enough we can do for him for what he did for us. I love you 14 and forever will!"

Similarly to Stauffer, Matt Lamm's favorite on-field memories of Marra will be when he'd take baseball swings on the field with his long pole, whether he sent it 90 yards downfield or completely whiffed. Lamm, a fellow senior, was close with Marra on the field, but off the field they were best friends.

Having countless memories to share and knowing Marra for half of his life, Lamm considers this loss like the death of a brother. A surreal moment like this is understandable when losing someone as "one of a kind" as Marra, and Lamm made sure to share how much compassion and heart his fallen teammate had.

"There was never a time where I went to him for help and he didn't deliver with everything he had in him. He was always putting others in front of himself," Lamm said through a text. "He was so charismatic and enthusiastic. He was so quick to put a smile on someone's face, whether it was him saying something funny, doing something really stupid, or just being in your presence. He had a mood-elevating aura that everyone around him felt.

" ... If things were to get chippy and out of hand in a game, there was always one person who I never doubted would have my back. And it was Mike. ... He brought something special to my life and this community. We will play our season as hard as we can in his honor and I will live every day of my life in the memory of one of the best people that I've been lucky enough to have in my life."

The many gestures that have poured in have been tremendous. The school hosted to a community gathering Thursday night to offers support, and the Sweet Home boys lacrosse team even visited the Jacks players for an open shootaround to help take their minds off the grief.

Fellow NT teammate Ethan Busse spent part of Thursday visiting the site of Marra's accident to deliver flowers and sign a poster in his friend's honor. In these dark days for the NT community, everyone seems focused on sharing Marra's light.

"No matter who you were, I'm not even saying this to be nice or anything, but he was just such a good guy," Busse said. "No matter who you were, if you were 'weird' or 'popular,' he would take you in and he'd be nice to you. It didn't matter, he was just an all-around great guy, and he always cared for everyone, his family, his friends. Even if he didn't know you, he'd always be nice to you."