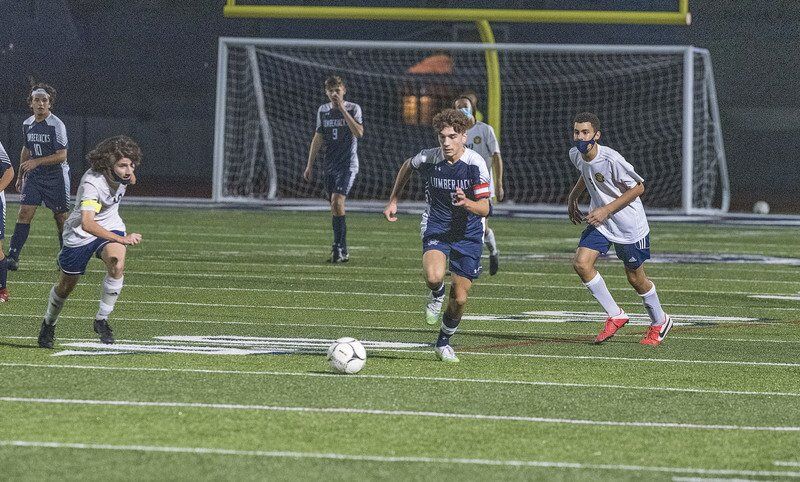 North Tonawanda's Nick Sciandra (8) chases the ball during Section VI Class A-1 boys soccer quarterfinal action Tuesday against Kenmore East at North Tonawanda. The senior scored two goals for the Jacks, including the game-winner in overtime. 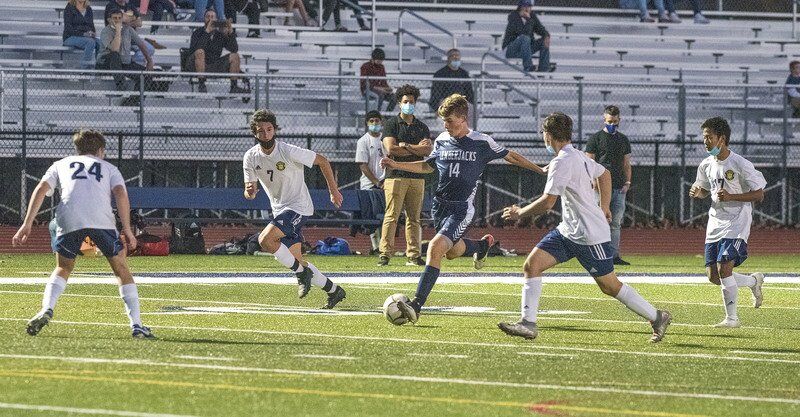 North Tonawanda's Nick Sciandra (8) chases the ball during Section VI Class A-1 boys soccer quarterfinal action Tuesday against Kenmore East at North Tonawanda. The senior scored two goals for the Jacks, including the game-winner in overtime.

In a battle of Niagara Frontier League foes, North Tonawanda boys soccer outlasted Kenmore East on Tuesday, taking a 3-2 overtime win in a Section VI Class A-1 quarterfinal match at North Tonawanda High School. Following along with what seems to be a postseason theme for several fall sports, NT (8-6) won this rubber match after splitting with Ken East (9-6) during the regular season.

The defenses came to play early, as the game remained scoreless through the first 34 minutes. But that's when the Bulldogs looked to their top scorer, as Spencer Raybuck scored with 6:07 left in the half.

The Jacks would answer quickly, as senior midfielder Nolan Anson responded with a goal of his own with 3:33 remaining in the half, tying the game going into the break.

After halftime, Raybuck would find the net once again, scoring on a penalty kick just six minutes out of the locker room. The junior forward has put together a fine 2020 season, scoring 20 goals and five assists.

NT seemed down and out from there, struggling to put shots on goal or penetrate the Bulldog defense. But this time the Lumberjacks turned to their top scorer, Nick Sciandra, who came up with his most clutch moments of the season.

With just over three minutes left to play, the senior forward scored his own PK to knot things at 2. Once overtime began, it was Sciandra's time to shine.

We'll let him tell you himself.

"It was awesome. I left it right over for (Anson), he played it right across. Just got it with the left foot and over to the other post," said Sciandra, as he scored the game-winning goal less than three minutes into the OT period. "It was an awesome play."

Sciandra thought his team's edge was outworking KE. He said the Jacks' "balls-to-feet" mentality helped them make the comeback and outplay the Bulldogs down the stretch.

It's never easy beating a team you're playing for the third time that season, but Tuesday's win was validation for Sciandra.

"They know who we are. We know who they are, though," said Sciandra, who leads NT in scoring with 13 goals. "So it's just ... who's the better team, who can do something with it. I mean, we beat 'em in a 2-1 series, it just shows that we're the better team."

NT head coach Rob Brocklehurst called the early stages of the game were a "chess match" due to the familiarity on both sides with this third battle. But knowing how much doubt surrounded the 2020 season before it began, Brocklehurst was more thankful about being able to compete.

"All season we've just been really blessed to have the opportunity to play our game," Brocklehurst said.

"And finding opportunities to be thankful. This is the youngest team I've ever fielded, based on the challenges and the kind of lack of participation through tryouts, and not being able to really pull up eighth- and seventh-graders into our JV program. So what started out as a small roster, ended up being a kind of JV-varsity hybrid. And so as proud as I am for the performance we've put forth tonight, and hopefully we'll play on Thursday, it leaves a lot of optimism for the future."

Fielding a roster with seven combined freshmen and sophomores led by eight seniors, the Jacks will be tasked with playing Class A-1's top seed in Williamsville East (11-0-1). When it comes to playing the Flames, Brocklehurst's message was short, sweet and to the point.

NT travels for a 5 p.m. tip Thursday at Will. East. The winner will advance to the Section VI Class A-1 title game Saturday.