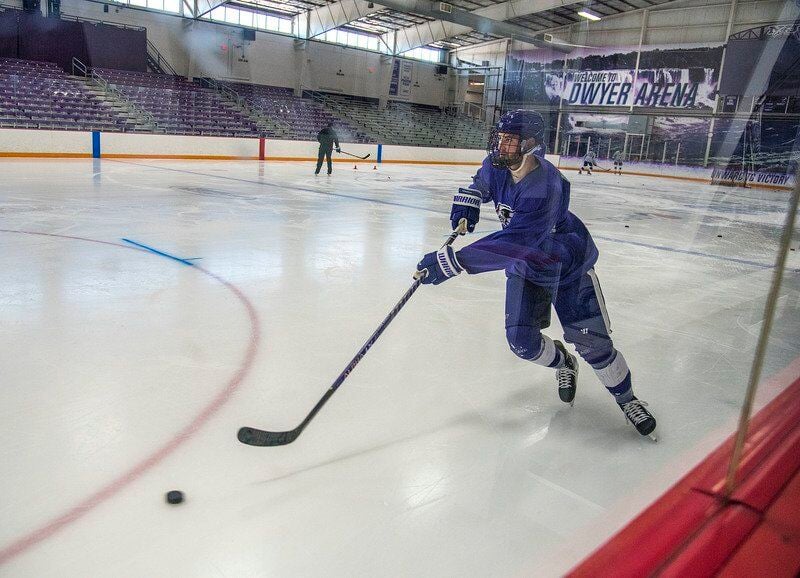 Defenseman Chris Harpur, seen here during a Sept. 20 practice at Dwyer Arena, is back for his fifth season playing for Niagara hockey. 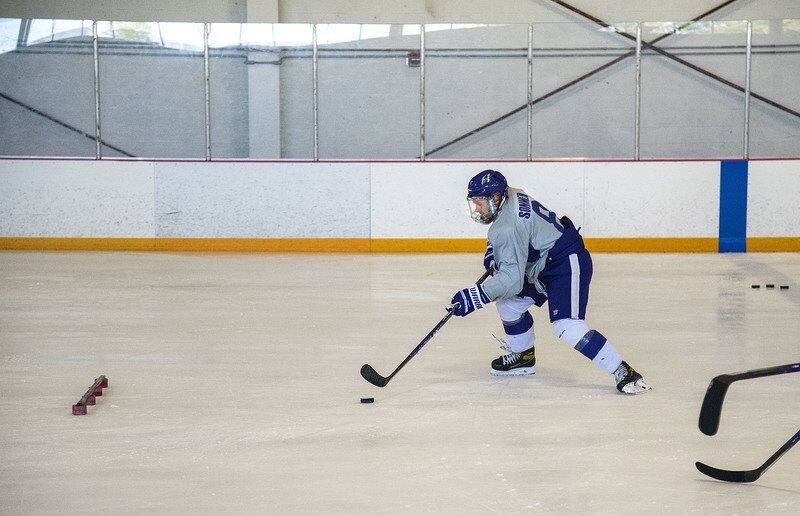 Defenseman Chris Harpur, seen here during a Sept. 20 practice at Dwyer Arena, is back for his fifth season playing for Niagara hockey.

When the Niagara Purple Eagles hockey team hits the ice this weekend in North Dakota to open the 2021-22 season against the nationally-ranked Fighting Hawks, it’ll have a different look, with a lot of new faces.

Despite all of the new additions, head coach Jason Lammers said it’s a tight knit group that's buying into the program's core message and work ethic.

“I really believe that they understand how important it is to believe in themselves, and then do the behaviors that match those beliefs,” he said. “So, instead of hoping things are going to happen, I feel like this group is going to make things happen, and they're really connected and really committed to each other.”

Last season was a challenging one for the Purple Eagles, who saw large chunks of their schedule, and practice time, disappear due to COVID-19. The team finished with a 7-12-3 record, going 3-9-3-1 in Atlantic Hockey before falling to AIC in the conference semifinals.

This year, they’ve already practiced together more as a team than at any point last year. It’s made a difference, said defenseman and team captain Chris Harpur.

“Last year was completely different from everything that we've had to do,” he said. “But this year, it feels normal.”

Playing in front of fans, both home and away, will be “refreshing,” Harpur said. The fans provide a boost, said forward Walker Sommer, who was recently named an assistant captain on the team. Sommer recalls the games last year, when the music would stop playing in between whistles, and the rink would be silent. He’s excited to get the fans back into it.

“One of the great parts of college hockey is having fans at the games,” he said.

Niagara plays its first home series of the season Nov. 5 and 6 against Air Force. The team has adjusted the start times to 5 p.m. for Saturday games in order to accommodate younger fans and families. Dwyer Arena will also be serving beer this season.

“We’re working on making it a family atmosphere and more of an experience than just going to see a hockey game,” Lammers said. “We're really hopeful that people and fans and our community will come out to support these guys and get to know them for all the work that they've done on the ice and off the ice as well.”

On the ice, Lammers said he’s looking for his defensemen to take an active role and drive play.

“I think our D corps is going to be very solid and our intent is to have the D corps lead our league in points by defensemen,” he said, noting that he’s excited to see what Harpur can do this season from the back end. “We want them involved in what we do and how we play.”

On the front end, Lammers said the coaching staff is working to get key players more goals. For instance, forward Ryan Cox had seven goals last season. The push is to get him to nine or 10 this year.

“We’re working on encouraging that with how we practice and what we do in practice,” he said.

Sommer led Niagara in goals (eight) and points (15) last season. Lammers is expecting him to use his speed and pick up where he left off last season.

“I believe Walker could be the best player in our league,” he said. “Walker has a fierce competitiveness and he's a very determined player. He wants to continue on with his hockey after Niagara, so he's very open to listening in terms of what it takes to do that and he's in great shape and has put in a lot of work.”

With the addition of Sibell, Niagara is carrying three goaltenders, with Michael Corson and Chad Veltri returning. Lammers said he expects “outstanding” goaltending this season.

“We have three really good goalies and great depth in goaltending,” he said.

With the talent on the team and the chemistry of the group, assistant captain and defenseman Jack Zielinski is expecting big things this season from the Purple Eagles.

“The cohesiveness of the group is at an all time high since I've been here, and I’m going into my fifth year now,” he said. “There's no egos in the room at all and this group's really close.”

In years past, the team seemed to hit its stride a bit later in the year. Zielinski doesn’t expect that to be an issue this season.

“I expect us to hit our stride a lot earlier in the season,” he said.

Niagara takes on the University of North Dakota (No. 8) at 8 p.m. tonight and 7 p.m. Saturday in Grand Forks, North Dakota. The games will stream on Flohockey.tv, and Frank Gallo’s call can be heard on the Tune-In app.