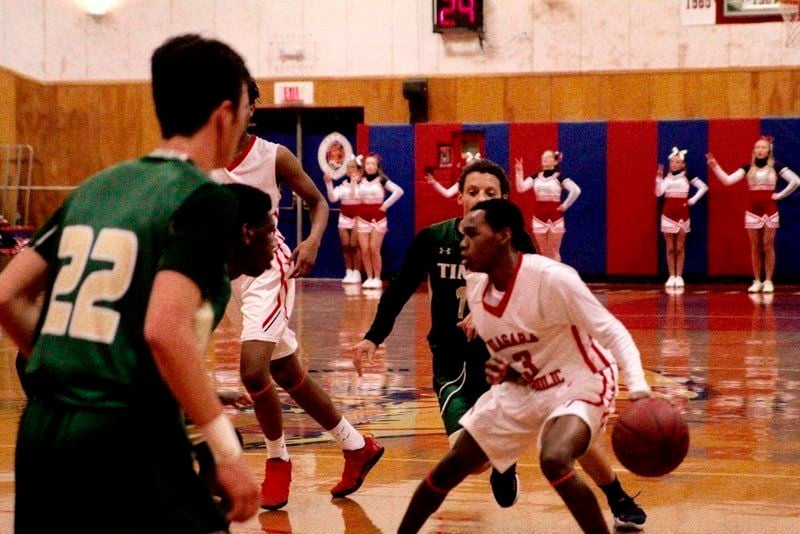 Paul Battson/ContributorThis January 2018 file photo shows Jaemon "Mookie" Turner in his tenure with now defunct Niagara Catholic. Turner was a starter on a Patriots squad that won the Monsignor Martin Class B Championship and made a run to the NYSCHSAA title game in 2018. 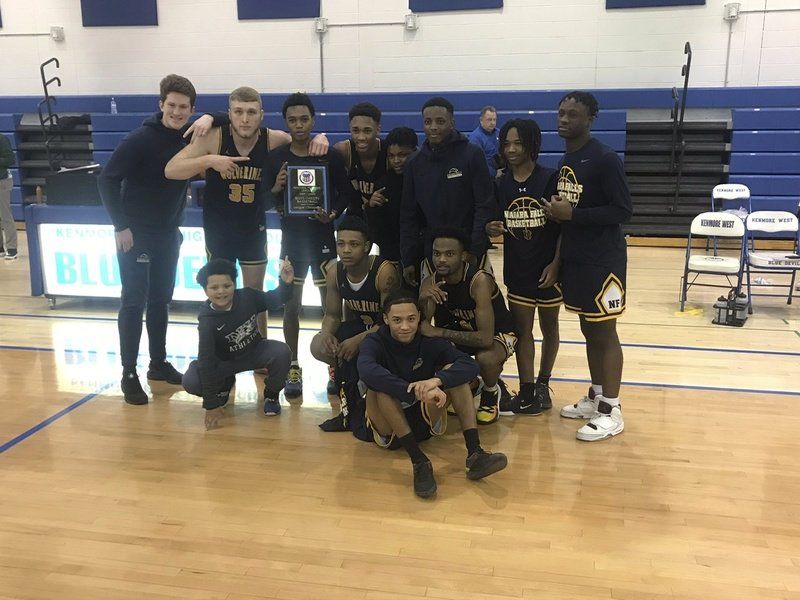 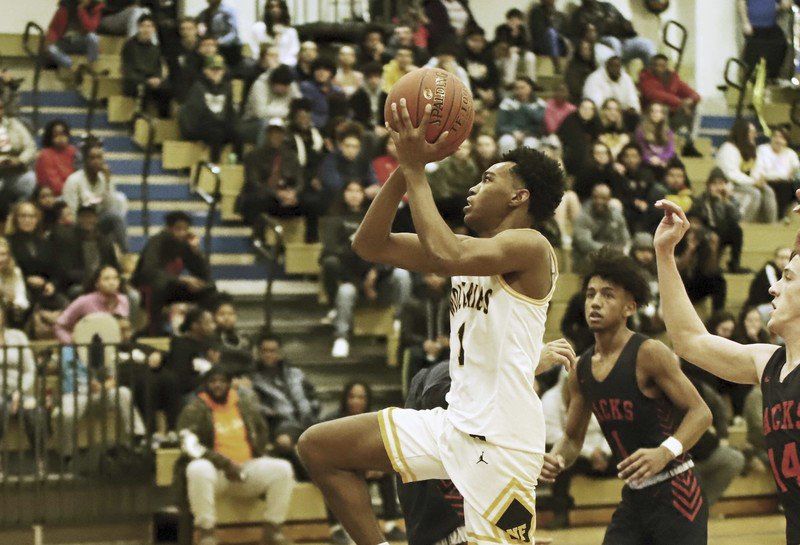 Paul Battson/ContributorThis January 2018 file photo shows Jaemon "Mookie" Turner in his tenure with now defunct Niagara Catholic. Turner was a starter on a Patriots squad that won the Monsignor Martin Class B Championship and made a run to the NYSCHSAA title game in 2018.

NIAGARA FALLS — Jaemon Turner's nickname is "Mookie," but he could also go by "silent assassin."

With Willie Lightfoot, Jalen Bradberry and Josiah Harris — not too mention longtime coach Sal Constantino — all leaving Niagara Falls' boys basketball program last offseason, many were left wondering what 2019-20 could look like for the Wolverines.

They must've forgot Mookie was still in town. But before we get to his senior season, you must understand his journey.

Turner started for Niagara Catholic as a freshman and sophomore, helping the Patriots win a Monsignor Martin Class B championship and making a run to the NYSCHSAA Class B state title game in 2018. With Catholic shutting down the same year, Mookie, his brother, Jaden, and Bradberry were able to join their hometown program at Niagara Falls.

"It was a big change. ... When the school closed, most of us went to (Niagara Falls High School). We knew a lot of people," Turner said. "And that was just like we were just reuniting from our childhood because we all used to play together. Then we finally got that chance and we made a big run to the state final four, and that was a great season."

Turner loved the new environment because of how much it pushed the guys to grow and learn each day. Touting a roster infused with Mookie, Bradberry, Lightfoot and Harris, the Wolverines notched their fourth straight Section VI Class AA championship, a Far West Regional title and their first trip to back to the NYSPHSAA semifinals in a decade.

Having Turner, Bradberry, Lightfoot and a healthy Taylor Sanders all back for 2019-20 was the plan. That's when things took a detour.

With Harris graduating, Bradberry replacing IMG Academy's Noah Hutchins at Park and Lightfoot taking his talents to Sunrise Christian Academy in Kansas, Turner locked in to the gym and prepared himself for a different role. This year it'd be his turn to run the show, adding to the Falls' legacy of dynamic guard play.

And despite his reserved demeanor, Turner knew he needed to be a vocal leader and step up for his youthful bunch. That's when the Mookie magic would ensue.

Whether it was Turner outscoring Cardinal O'Hara by himself in the Cataract Classic, when he torched the Hawks for 39 points and six 3-pointers, or notching his 1,000th point on Feb. 8 against Lockport, the moments he put on display were a plenty this winter. He also posted a triple-double (24 points, 12 steals, 11 assists) the first time he saw the Lions on Dec. 14 and charged the Falls to a third straight Niagara Division title.

That set up a winner-takes-all Niagara Frontier League title game with Lewiston-Porter, where the Lancers were led by Niagara Falls native and four-star college prospect Roddy Gayle Jr.

Although Gayle outscored Turner, 29 to 28, the Wolverines were able to upend Lew-Port to cap off a 13-0 NFL season. As masterful as his play was, his leadership was more evident, guiding the Wolverines when they were limited to playing just six players, with guys like Sanders and Bryce Smith out for the season.

Although the team ran out of steam after making it back to Buffalo State for the Section VI Class AA semifinals, Turner did just what head coach Brent Gadacz said he would during training camp: he had a coming out party.

Knowing Gadacz since his modified days, Turner was able to lead the first-year varsity coach's group as the lead guard. Mookie was excited for Constantino's replacement to be someone he already had a relationship with and someone he knew was a good coach.

Gadacz called Turner a "coach's dream" due to how much work he puts in each day, his respectfulness and for being a quiet leader. Even in some tight games, Mookie would suggest play calls in a manner that gave Gadacz no choice but to respect and consider implementing them.

What Mookie did on the hardwood speaks for itself, averaging 22.1 points and 6.2 assists per game as a first team All-NFL selection. But the intangibles are what stood out for Gadacz.

"That's the thing I'm gonna remember most about Mookie: not only did he have a great season as a player with some of the things he did on the floor," Gadacz said, "but he was such a joy to coach. If I could coach 12 or 13 Jaemon Turners every year, I'd be a happy man."

Gadacz added that Turner was a factor even when he wasn't scoring. If his jump shot wasn't falling, he'd get to the rack with his floater. If the floater couldn't drop, he'd work to draw fouls to flash a strong shooting touch at the line.

He even progressed as a playmaker, dishing to guys like Faybion Prather and Aarien "Oobie" Robinson, who individually knocked seven treys in back-to-back games against Niagara Wheatfield and Frontier, respectively. Rather than force his hand, Mookie fed the hot hand to help his squad. He was patient enough to let the offense flow, look for his teammates and take shots when warranted, even if he was heating up himself.

It took time for Turner to adjust from being the steadying force on a loaded team to being the the go-to guy on a league championship team. Be he did so, finishing as the Wolverines' overall leader in points and assists while pacing their guards in rebounds.

With his high school tenure behind him, Mookie just hopes people remember him for being a great team-first guy, a dynamic scorer and for always bringing his smile and a level of happiness to the court.

Gadacz does feel odd discussing something as trivial as basketball at this time, as he hopes the Niagara Falls community and beyond are taking the necessary precautions to temper the COVID-19 pandemic. Even in a time of isolation and social distancing, Gadacz knows remaining together and being social is the only way to get us through.

But until things get to back normal, he'll just have time to think of what his first varsity season was like and how his best player carried himself.

"He was the same way, hasn't changed his attitude, his demeanor," Gadacz said. "His being liked by mostly everybody he comes in contact with since I coached him on the modified team when he was in seventh grade, nothing's changed. Even the success he started having right from the beginning of the year didn't change him, as a person or a player."

Turner is not sure yet what his future holds. He'd like to continue playing basketball and is weighing his options.