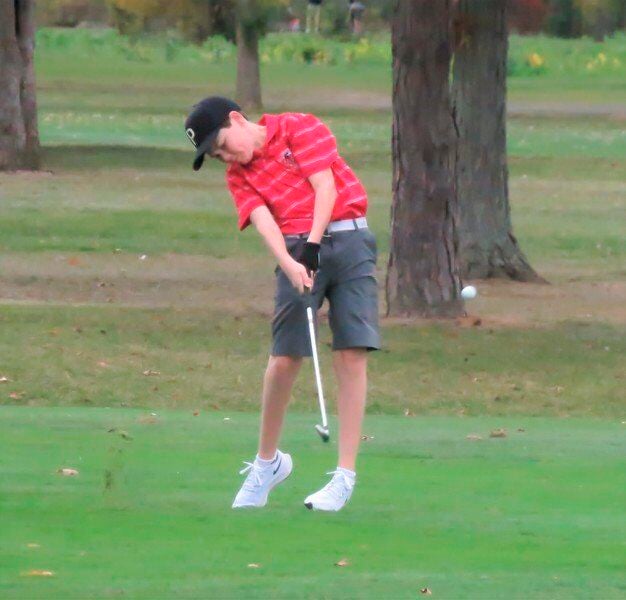 Niagara Wheatfield's RJ Delisanti takes a swing from the fairway Tuesday at Tan Tara Golf Club. Delisanti shot a 38 in the Falcons' tri-match victories over Niagara Falls and Kenmore West. 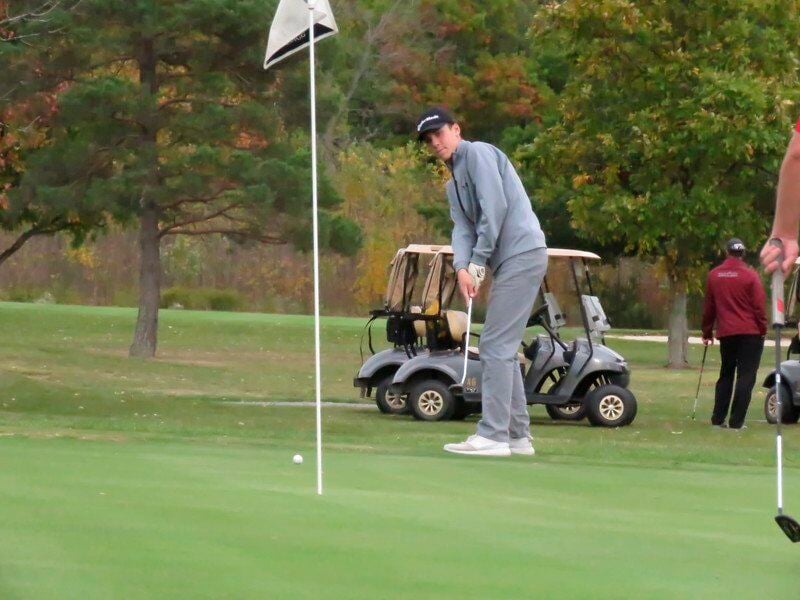 Niagara Falls' Greg Lowry watches his putt roll toward the cup during a tri-match Tuesday against Kenmore West and Niagara Wheatfield at Tan Tara Golf Club.

Niagara Wheatfield's RJ Delisanti takes a swing from the fairway Tuesday at Tan Tara Golf Club. Delisanti shot a 38 in the Falcons' tri-match victories over Niagara Falls and Kenmore West.

Niagara Falls' Greg Lowry watches his putt roll toward the cup during a tri-match Tuesday against Kenmore West and Niagara Wheatfield at Tan Tara Golf Club.

It’s been a while, but high school sports are back.

While some fall sports have been moved to the spring due to COVID-19, Niagara County's golf teams have hit the fairways for a condensed 2020 season.

Teams in the Niagara Frontier League began a two-week slate of matches last Friday. Each team will play seven matches before the league tournament, which is scheduled for Oct. 13 at Willowbrook Golf Course.

For safety measures, golfers have been encouraged to wear masks and practice social distancing while at the golf course. Additionally, the pins on the greens stay in the hole while players putt to avoid constant touching and spreading of germs.

Long story short, there is a lot of golf to play in a short amount of time.

Niagara Wheatfield remains one of the top dogs in the NFL, returning senior Anthony Delisanti, who has made a name for himself at the state level.

Delisanti started the season at Deerwood Golf Course with a Falcons record 6-under 30 versus North Tonawanda. The seniors medaling score sealed a 263-267 victory.

While Delisanti's brother, RJ, also returns, along with Noah Conte and Bri Scozzafava — who would have played in the girls sectionals last spring if not for the pandemic — the team did lose two key golfers in the lineup in Adam Liberti and Trevor Conte.

Codd mentioned some newcomers with expectations include Liberti’s brother, Dan, and Ty Reed. Codd said he is "counting on them to put up some good scores.”

As far as winning a seventh straight NFL crown, Codd said he expects it to be a fight for the top spot.

“(Kenmore) East is solid this year. I think he’s got everyone back,” Codd said. “We’re going to have to play very good golf from top to bottom to play well with them, because matches are won at the back end of the lineup.”

Following the long hiatus of high school sports, Codd added that it’s nice to be back around his team.

“It’s been great,” he said. “It was the first sport back. It’s been a good escape for everyone this summer to go out and play golf. … I think that’s why you’ve seen the number of people playing golf has gone through the roof.”

Head coach Jack Pero and the Wolverines are looking to compete in matches this season while also developing a young roster.

Additionally, roster size has usually been small for NF, but Pero said turnouts this fall were outstanding. He now has a very young roster that may be new to the game, though that youth gives players time to develop for the program.

“It’s great, they’re all interested in playing. They all seem passionate for the game and to be a part of it, so we’re excited about that,” Pero said. “They’re grinding it out and playing, so we’re happy about that and we’re excited to see what’s to come.”

The youth and eagerness to learn the game was something Pero said he enjoys about the 2020 team.

When it comes to competing in the league, Pero said his bunch will look to do just that and fight to put up good, consistent scores on a match-to-match basis.

Speaking of young rosters, the Lancers and coach Scott Townsend also boast a roster of underclassmen who will fill the lineup this year.

Townsend, like Pero, said the turnout at tryouts was outstanding, and his roster contains 27 golfers.

“This season we are hoping to fill our holes with a mix of young players and veteran players who have been in and out of the lineup over the past few years. We hope to compete for the top part of the league,” Townsend said.

Like many teams, Townsend added that the Lancers have many young faces new to the game of golf, but he’s also thrilled by the practice his returners put in during the offseason.

“Some of the kids are fairly new to the game, so it's exciting to see the game of golf become so popular with young athletes. I am also very pleased to see how much work many of our top players have put into the offseason to improve their games. Our top players all played a lot and made major improvements in their games coming into the season,” Townsend said.

Townsend, who also coaches the Lancers boys tennis team in the spring, said it’s nice to see high school sports back in some sort of fashion after a sad end to last year. Although the season may be short, he said there’s an excitement in the air to be back.

“I've never seen the kids so excited for a season to start. They have been through a lot in the last few months, and the opportunity to compete is very therapeutic for them as they slowly begin to return to some sense of normalcy,” he said.

The Vikings looks to improve on last year's 4-17 finish, and coach Craig Warthling seemed confident in his bunch.

With high-risk fall sports pushed to the spring, the Vikings coach said he got a good turnout at tryouts.

“I had a good turnout because of no football or volleyball, so I have some juniors and seniors,” Warthling said.

Amongst the upperclassmen Warthling has high hopes for are seniors Zach Cramer, Ben Steck and Joe Novak, and juniors Tyler Figliola and Nick Karnath.

After the top five of the Vikings' experienced lineup, Warthling said it’ll be a fight between the rest of the young roster to fill out the lineup.

The Lumberjacks had a successful 2019 season, going 13-6 and finishing third. Coach Alan Zbytek said the expectations are even greater this season.

The team returns seniors Casey O’Bryan and Joel Reed, who have consistently shot in the low-to-mid 40s. Additionally, juniors Lucas Matyevich and Andrew Traina, who Zbytek said are keys to the team’s success, are also back.

The team will have to continue its success without Jaxon Hummel, though. The Class of '19 graduate was the No.1 for the Jacks, consistently shooting in the 30s. Last October, Hummel finished third in the NFL Tournament with a 77. Due to COVID-19, Hummel, like many, didn’t get a chance to compete at the Section VI Tournament.

The Jacks have started a cool 2-1, with the one loss coming by four strokes in a close match with Niagara Wheatfield. Of the defeat, Zbytek said, even though it was a loss, his team was “pleasantly surprised” with how they shot against the reigning NFL champ.

The encouraging results have Zbytek believing the Jacks could possibly catch the NFL by surprise.

“Hopefully at the NFL tournament we can steal the league this year,” he said.

Zbytek, who also coaches the NT hockey team, said he got four hockey players — not bad golfers, according to the coach — to come out for the golf team and help round out the lineup.

Despite losing Hummel, Zbytek said he’s confident in this year’s team from top to bottom.

“I’ve seen more consistency. Our five through eight golfers are more consistent this year with their scores, and despite losing Jaxon, who would shoot in the 30s all the time, that will make us more competitive,” he said.

Additionally, Zbytek said it’s nice to see kids back out on the course and playing sports, rather than being held back by the pandemic.

“It’s wonderful. We are very fortunate to have the kids playing golf and the kids out their competing. It’s nice to see them out and doing something,” he said.

The Lions and coach Lou Cercone come into 2020 off a fifth-place finish in the NFL last season with a record of 9-12. Lockport is looking to move up in the standings this fall with a lineup Cercone called “consistent and strong.”

Cercone said his team will be tough competition for other teams in the NFL. Despite starting 1-2, it's been just that. Those two losses came by five and seven strokes.

“We’re building off the consistency from last year,” Cercone said. “We’re definitely looking to compete this season, and we’ve been competitive in all three matches so far.”

After getting 23 golfers at tryouts, Cercone said he looks forward to the youth on his practice squad developing and becoming big-time players down the line. Additionally, he said his team is a determined one.

“They really enjoy golf. They’re competitive and build each other up rather than tearing each other down and I love that. So, overall, I really like the youth and positivity of this team,” Cercone said.

Early on, Cercone is also just happy to be back out on the course with his players.

“I thought about my five seniors all summer and if they’d lose their last season of golf,” he said. “I feel thankful we’re able to at least an abbreviated season. Considering the circumstances, it’s great to see the kids having fun. I’m happy for them.”