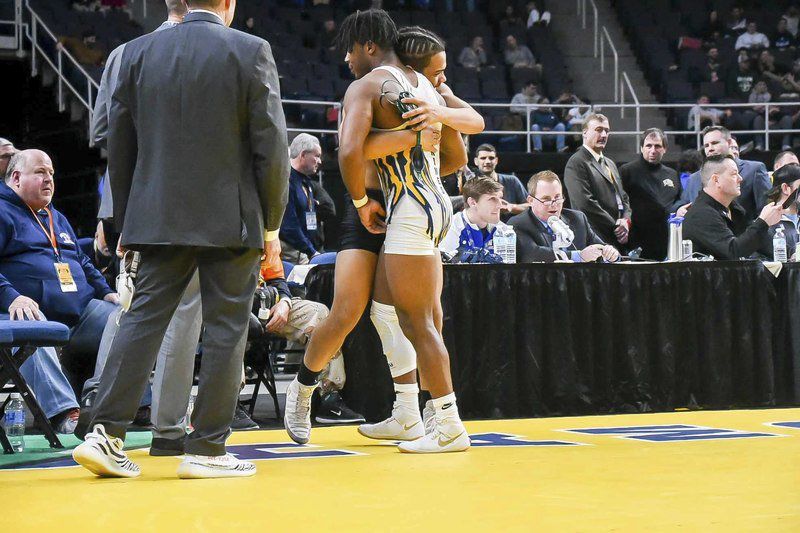 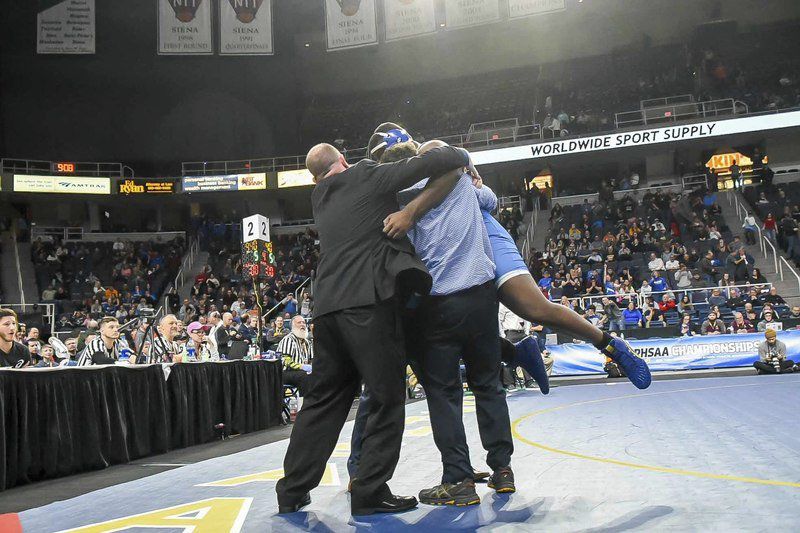 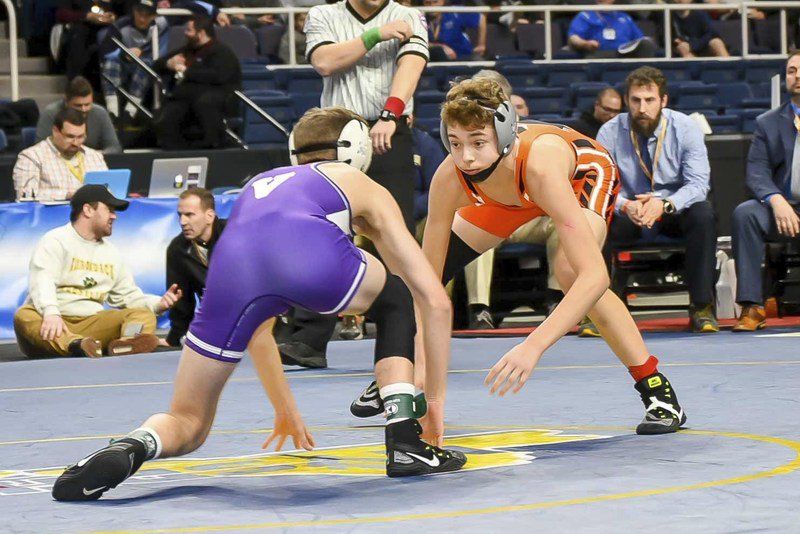 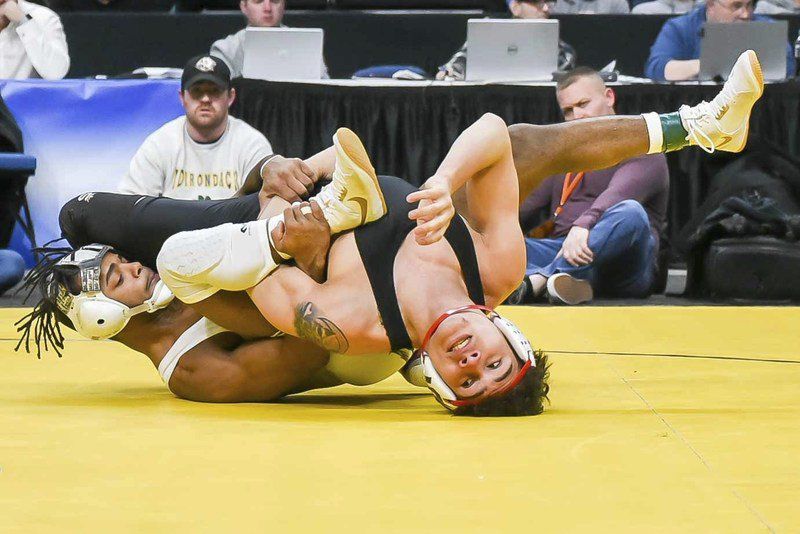 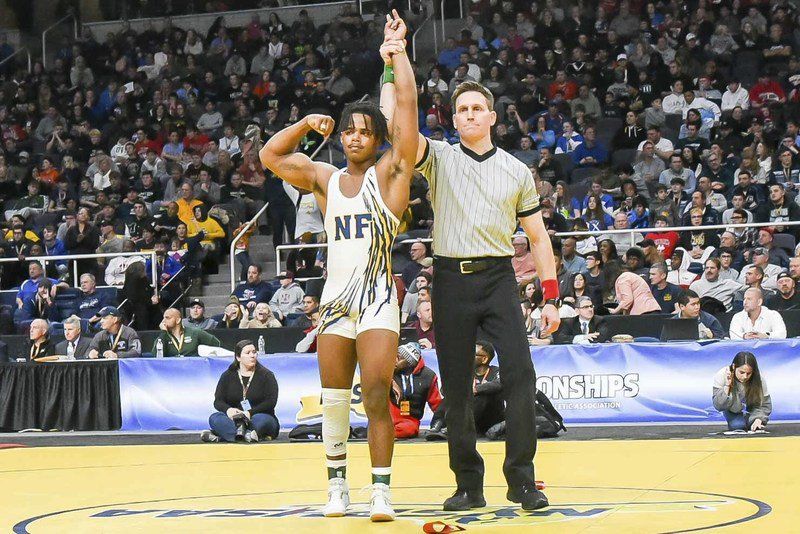 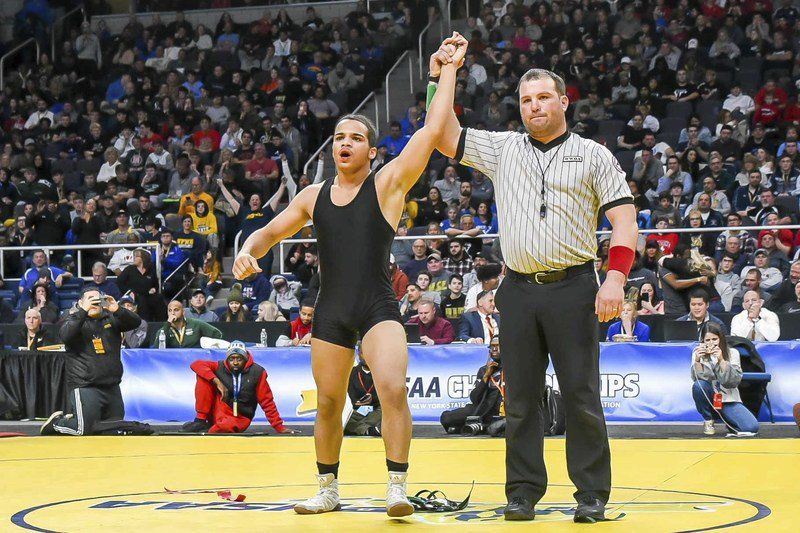 Bob Koshinski/contributorNiagara Wheatfield senior Justin McDougald is declared champion of the 138-pound Division I bracket Saturday at the NYSPHSAA wrestling tournament in Albany. 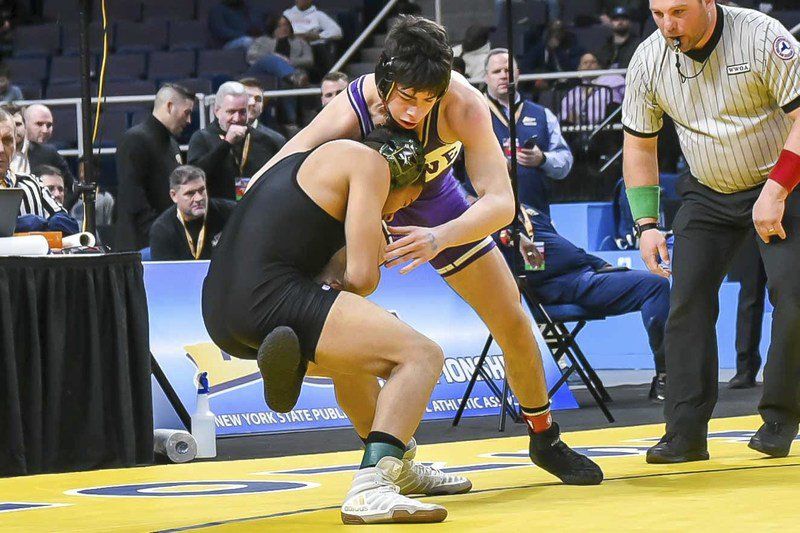 Bob Koshinski/contributorFalcons' senior Justin McDougald attempts to escape the grasp of Hilton's Ryan Burgos during the Division I 138-pound title match Saturday at the NYSPHSAA wresting tournament in Albany. 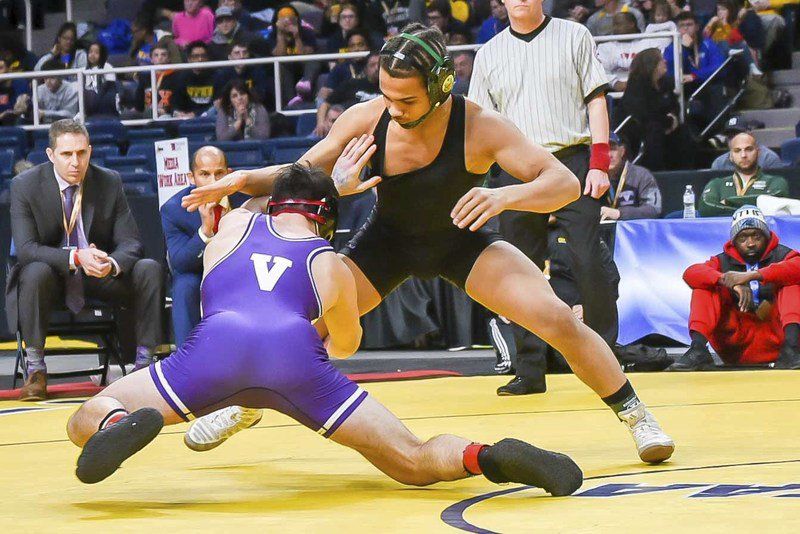 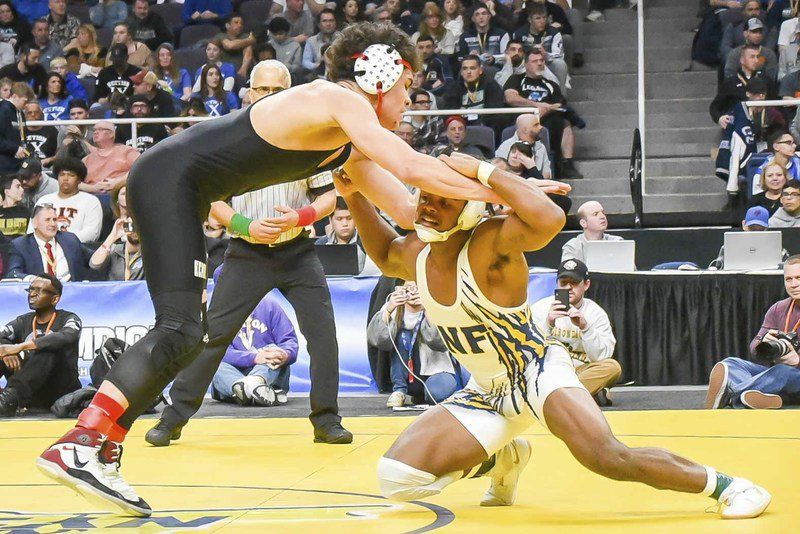 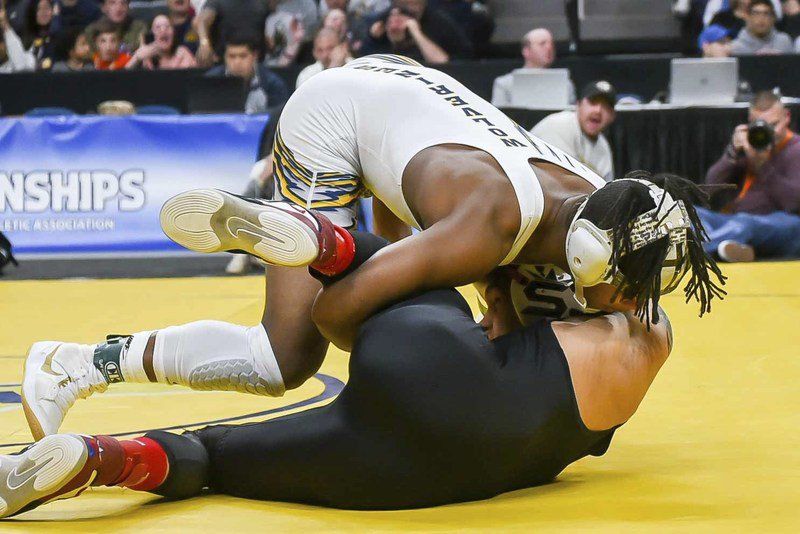 Bob Koshinski/contributorNiagara Falls' Willie McDougald rolls over Lee Mauras (Hempstead) during the title match of the 145-pound bracket Saturday at the NYSPHSAA wrestling tournament in Albany. 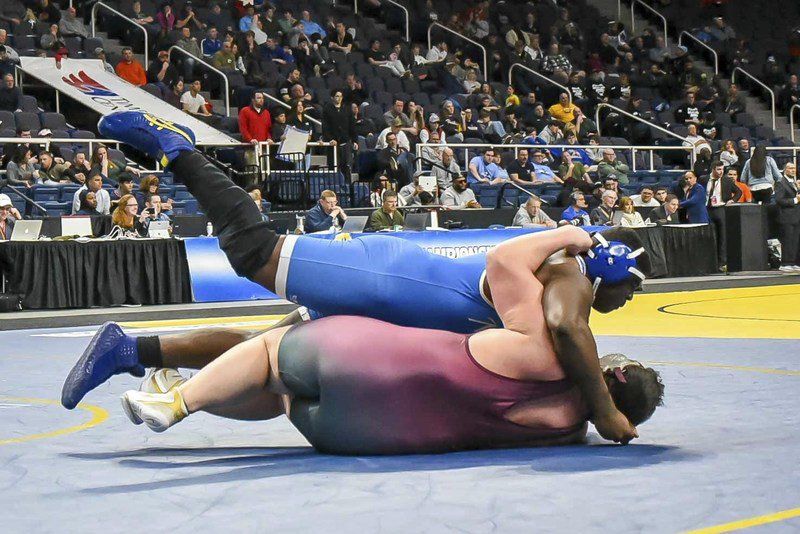 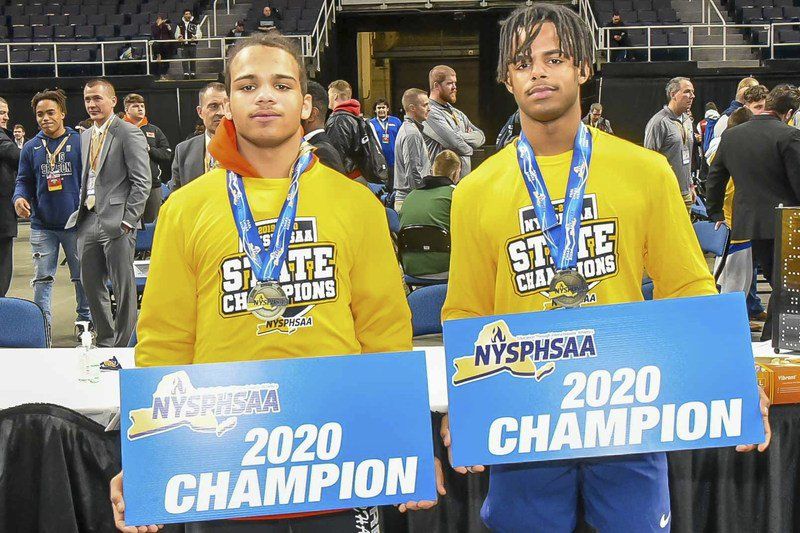 Bob Koshinski/contributorNiagara Wheatfield senior Justin McDougald is declared champion of the 138-pound Division I bracket Saturday at the NYSPHSAA wrestling tournament in Albany.

Bob Koshinski/contributorFalcons' senior Justin McDougald attempts to escape the grasp of Hilton's Ryan Burgos during the Division I 138-pound title match Saturday at the NYSPHSAA wresting tournament in Albany.

Bob Koshinski/contributorNiagara Falls' Willie McDougald rolls over Lee Mauras (Hempstead) during the title match of the 145-pound bracket Saturday at the NYSPHSAA wrestling tournament in Albany.

Section VI wrestling does it again, this time with newly minted state champions.

It was a successful championship day for our local programs at this weekend’s NYSPHSAA tournament, as three of our Section VI competitors took home state championships Saturday in Albany’s Times Union Center. Newfane’s Jaden Heers, as well as the McDougald cousins, Justin (Niagara Wheatfield) and Willie (Niagara Falls), notched Section VI’s only championship wins in the tourney.

Willie took a 7-4 decision over Section V opponent Mason Wersinger (Spencerport) in the semis, before he took an 8-2 decision in the 145-pound finals over Hempstead’s Lee Mauras. The Falls’ all-time win leader closes out his career as a two-time state champ, finishing his senior season at a remarkable 44-1.

Intermatwrestle.com’s No. 17-ranked 145-pounder in the country closes out his varsity career as a five-time Section VI champion, notching his fourth consecutive NYSPHSAA place finish.

As for his cousin, Justin, the Falcons’ all-time wins leader started out his day with a 6-3 decision over Rocky Point’s Logan Sciotto. But things would only get interesting from there.

Justin would battle with Hilton’s Ryan Burgos in the final round. Not only was the Section V stud a returning state champ himself, he also handed Justin his lone loss of the season in the Eastern States Classic back in January.

N-W’s star talked about what it took beating someone he had lost to earlier in the year and what he had in mind this time around.

“Wrestling somebody that beat me, I just kept in the back of my mind that feeling I had when I lost, that ‘oh crap’ moment,” Justin said, earning a decisive two-point take down to go ahead with 24 seconds left in the match. “And I just bottled it up and I kept it in the back of my head for him to finally mess up. ... I just seized the moment, that’s all it was. I just seized the moment.”

Being able to share the championship stage with his cousin was something Justin has talked about in past interviews. Now that the moment has come, he was able to step back and reflect.

“It feels good to finally create history between the family and to set a bar very high for people to get to and achieve and get to,” said Justin, who closed his senior season with a 45-1 record. “It’s something we prepared for our whole lives, it doesn’t just come that easy. We worked for it and I feel like it was well deserved.”

“Justin was focused all year round with it. ... Justin was hungry, he was focused. ... He was probably the most confident I ever saw him walking out on the mat when he went out there, he was just gonna do it, he was hungry,” Sweney said of the rematch with Burgos. “(Burgos) is ranked (No. 14 among 138 pounders) in the nation right now and he just knocked him off, so he’s very excited.”

As for the family: “They’ve accomplished, probably, more than any other family that I can think of in Western New York.”

Our heavyweight representative in Division II was Heers, who took the long route as the No. 4 seed in 285. He was able to advance with an 8-6 decision over No. 1 George Lebberes of Ardsley before matching up with Canastota’s Mike Leibl once again after Leibl knocked Heers out of last year’s state tournament.

“I had to tire him out, just had to get him tired and take advantage of it. I had to realize his mistakes and I had to move on them,” Heers said, as he ends his senior year with a 46-2 record.

Although his teammate Andy Lucinski fell in the 106-pound final, as well as Ryan Nugent and Aidan Gillings bowing out of the state tourney, Heers was able to share what it’s been like working with his team this year and being under the tutelage of Panthers’ head coach Matt Lingle.

“It was a great group of kids, they were just down to just wrestle anybody. They didn’t care who it was, they just wanted to go out there and wrestle,” Heers said of the staff that has gone undefeated in Niagara-Orleans League action the last seven seasons. “The coaches have just been pushing us all year long and they’re really great coaches. ... That’s pretty much it, I’m still in shock.”

Follow sports reporter Khari Demos on Twitter @riri_demos. Also, tune in to Khari at 10 a.m. on Saturdays on WGR 550’s ‘Inside High School Sports,’ as well as the ‘Greater WNY Sports Connection’ podcast, a collaboration with Jon Simon and WNY Athletics.