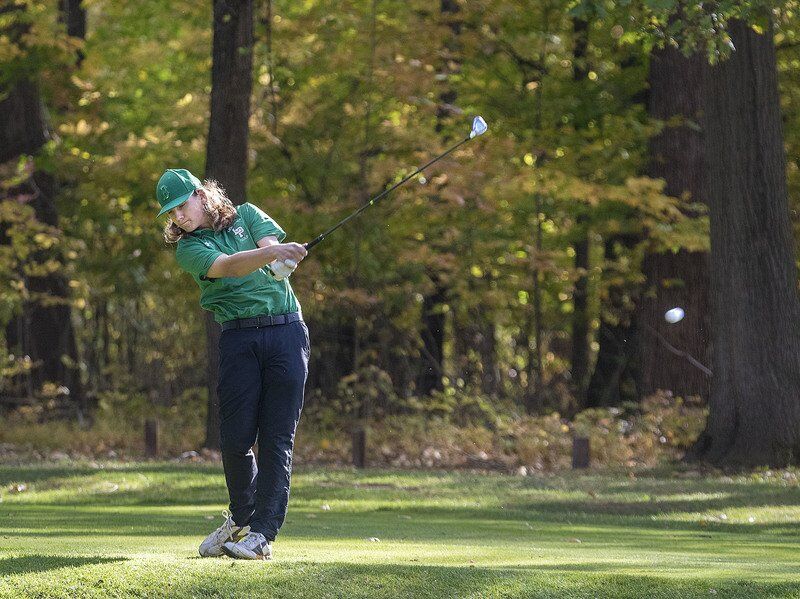 Lewiston-Porter golfer Jack McGrath tees off on the 11th hole of the NFL Tournament on Tuesday at Willowbrook Golf Course. 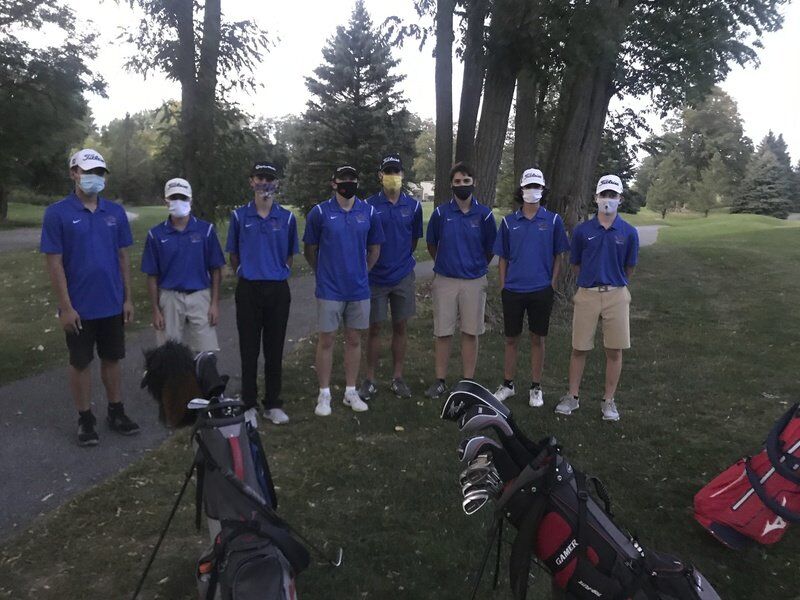 The Lockport boys golf team poses after a match this season. The Lions were able to capture their first Niagara Frontier League title since 2013 on Tuesday, winning the league tournament at Willowbrook Golf Course. 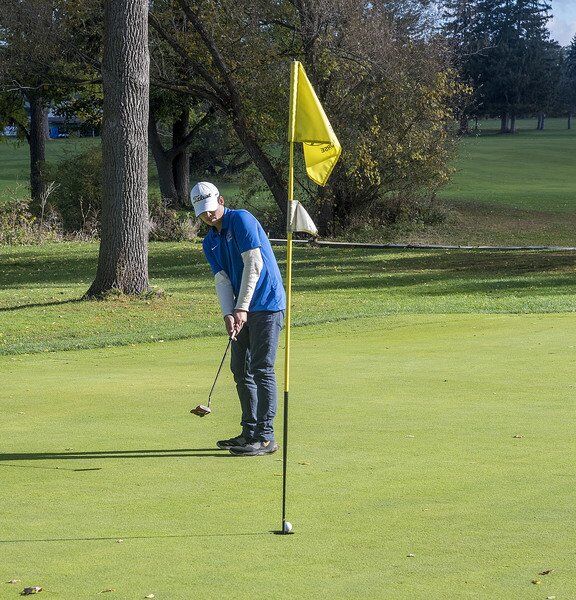 Kyle Cassidy of Lockport sinks his putt on the 10th hole of the NFL Tournament on Tuesday at Willowbrook Golf Course.

Lewiston-Porter golfer Jack McGrath tees off on the 11th hole of the NFL Tournament on Tuesday at Willowbrook Golf Course.

The Lockport boys golf team poses after a match this season. The Lions were able to capture their first Niagara Frontier League title since 2013 on Tuesday, winning the league tournament at Willowbrook Golf Course.

Kyle Cassidy of Lockport sinks his putt on the 10th hole of the NFL Tournament on Tuesday at Willowbrook Golf Course.

LOCKPORT — It's been a bit, but Lockport golf is back on top in the Niagara Frontier League.

The Lions closed out their fall season with a win in Tuesday's NFL Tournament at Willowbrook Golf Course. Lockport (11-3) claimed its first championship since 2013.

Lions head coach Lou Cercone saw his squad piece together a score of 440 on the day, outpacing Lewiston-Porter's 455. The Lancers (9-5) finished just behind Lockport in the tournament as well as overall in the league standings.

Lockport's top player was Ben Shanley, who finished with a team-low score of 82. That mark would tie for fourth overall on the day, which will send him to the Section VI tournament in the spring. Kyle Cassidy also made it to sectionals, just making the cut after shooting an 86.

The Lions may also send Adam Firkins, whose 88 notched him a spot as the NFL's second alternate.

Cercone shared how the team ground things out all season, with all three regular-season losses coming by narrow margins. With Shanley, Firkins and Cassidy all closing out their high school careers, Cercone is glad they got to finish things up with a season to remember.

"I just couldn't be more pumped for these kids. It's a great group of guys," Cercone said. "I have three seniors today who I'm gonna miss and I couldn't be more proud of. And I'm just happy for them. They did the work, I'm just here to support them and I'm thrilled."

The Lockport coach talked about the progression it's taken to even get to this point. Although it was a half season that was trimmed down due to the COVID-19 pandemic, he's thankful for even getting the chance to work with this group.

Cercone was also laudatory of how the league, players and coaches included, set and complied to safety protocols which contributed to the season going as smoothly as it did.

Cercone's message to his Lockport squad this season was to take advantage of a league that finally seemed wide open after Niagara Wheatfield's six-year run on top. Tuesday's win means that Lockport joins Kenmore East as the only other programs to take the NFL in recent years, as NW has won the league eight times since 2009.

The Falcons may have fallen short as a team, but their top golfer showed as expected. Even on an off day by his standards, senior Anthony Delisanti earned his fourth straight medalist honor for the lowest score in the NFL Tournament, this time with a 75.

Although it wasn't his event record of 69 — shot as a sophomore in 2018 — Delisanti is happy to have such an accomplishment with his four straight league titles. The standard that he's set speaks for itself, though, so any competitor can understand how not living up to his personal expectations may not reflect what he was able to achieve in the tournament.

The senior knows there's work to be done and he wants to sharpen his mental components for his next time on the links. Delisanti broke down the areas of his game from Tuesday and how he won, despite battling through some of his own troubles.

"I started off OK, I would say. I was just struggling with the putter, I couldn't make a putt the first six holes," Delisanti said. "I gave myself good looks but they just weren't falling. And from, I'd say, from ... (hole) eight to 15, mentally just didn't have it. I was just all over the place. And obviously a good bounce back on 16, 17 and 18 to finish 2-under (on the back nine) which helped me, but definitely got a lot of work to do."

Delisanti missed out on last season's Section VI tournament due to the coronavirus nixing all high school spring sports. Although the virus has the event up in the air again, the Falcons' career-record holder will be looking for "revenge" after a falling at sectionals during his sophomore season.

The NFL tourney's second-place finisher was Lew-Port's Rocco Randazzo, whose 77 was one of only two sub-80 scores. With the goal in mind of keeping the ball in play, the sophomore said he felt loose, which helped him swing the clubs well.

Randazzo also noted the stretch of holes that really stood out from his strong showing. His hope is that he can carry Tuesday's efforts over for a top-10 finish at sectionals.

"Finishing the front nine, I played the last six holes in the front 1-under, so that really helped me," Randazzo said.

Coming in third was North Tonawanda's Casey O'Bryan, who posted a score of 81. O'Bryan said "he wasn't really feeling it" during the front nine, which slowed him down to start. But from holes eight and nine on, the senior could feel himself heating up.

Once he figured out his driver, O'Bryan was able to settle in and rebuild his confidence. That led to a strong back nine and a trip to the Section VI tournament with a top-eight finish.

"It would be the 11th, 12th and 13th hole ... I was confident. I actually haven't felt that confident in a long time," O'Bryan said. "I just felt like I could get up on the tee box and I was just gonna put it right down the fairway or hit the green. ... Twenty-footers looked like two-footers to me today."

O'Bryan competed in the first group with Delisanti and Randazzo, who he said are great guys as well as great golfers. He looks forward to joining them and Shanley this spring after the lost 2020 sectional tournament.

Although June 5-7, 2021 is the date set for the NYSPHSAA tournament, the Section VI event (state qualifier) does not have a date set in stone yet. According to the 2020-21 Section VI boys golf handbook, though, the sectional tourney will take place within the first three weeks of May, meaning it could fall anywhere from Saturday, May 1 to Saturday, May 22.