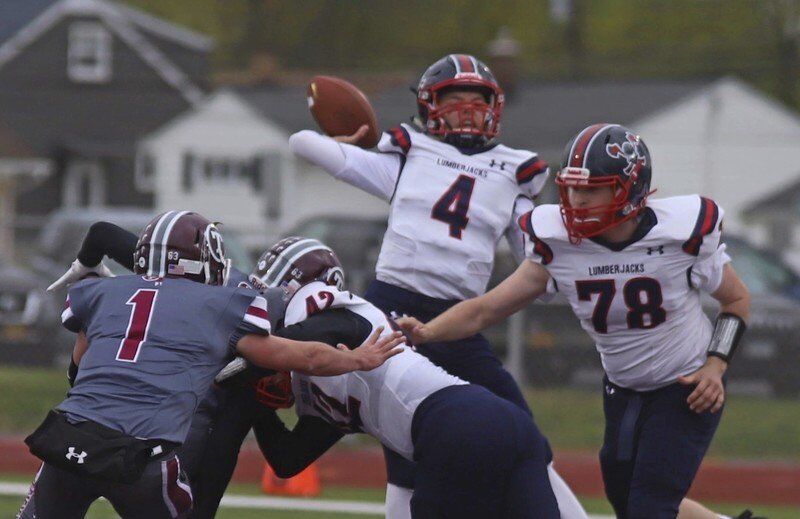 North Tonawanda QB Nash Rieslman throws downfield in Friday night's T-NT Classic in Tonawanda. The sophomore accounted for three total touchdowns in the win, guiding NT to its first win in the series since 2018. 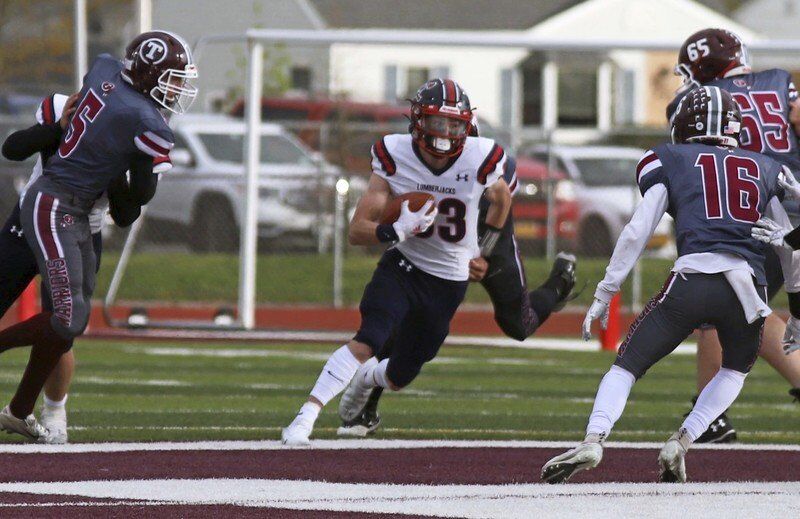 North Tonawanda's Wally Wisniewski runs into traffic in Friday night's 111th annual T-NT Classic at Clinton H. Small Stadium in Tonawanda. The Lumberjacks took a 33-20 win, their first in the series since 2018.

North Tonawanda QB Nash Rieslman throws downfield in Friday night's T-NT Classic in Tonawanda. The sophomore accounted for three total touchdowns in the win, guiding NT to its first win in the series since 2018.

North Tonawanda's Wally Wisniewski runs into traffic in Friday night's 111th annual T-NT Classic at Clinton H. Small Stadium in Tonawanda. The Lumberjacks took a 33-20 win, their first in the series since 2018.

TONAWANDA — North Tonawanda football head coach Rick Tomm certainly had the quip of the night: “It’s easier to be the hammer than the nail.”

And after having to wait until the first weekend of May to square off against rival Tonawanda for the first time since the Warriors ended the 18-year drought in 2019, the Lumberjacks were ready to get back to their pounding ways.

Behind 27 unanswered points in the first half, the Lumberjacks brought the bragging rights back to the Lumber City with a 33-20 victory versus Tonawanda Friday night in the 111th edition of the T-NT Classic held at Clinton H. Small Stadium.

Considering the long journey the program has experienced over the past year-and-a-half, on top of the ongoing COVID-19 pandemic, Tomm was impressed with his group’s efforts that resulted in a three-game winning streak to end the unprecedented 2021 spring season.

“We just preached to these guys that football is a tough game and it’s hard to win football games,” said Tomm, as the Jacks finished 3-3 on the season to close his third season overall at the varsity helm.

“We've gotta do little things correctly and we ask these guys to do a lot of things correctly. ... There’s a lot of things in NT tradition that makes it great and it’s really hard to get re-established once we don’t have it for a while. These (seniors) showed them the way. We got the young guys that believe. Once we got a win under our belt — I wish we had it earlier in the season — but you saw it here today and it was a great win.”

"We're lucky enough that our seniors got to play and I told them how blessed they were," said Tonawanda head coach Joe Kelly, whose team finished at 2-4 overall. "I told them, five, six weeks ago how blessed they were and how short the seasons are. They're just so lucky and that we were blessed we came up with (a season.)"

The Warriors drew first blood when they marched down on the first drive of the game. By marching inside NT territory, senior quarterback Justin Mangold found receiver and classmate Rudy Warren for a 10-yard touchdown reception. A two-point conversion failed, keeping Tonawanda’s lead at 6-0 with 8:07 left in the first quarter. The Lumberjacks then took over to control the remainder of the first half.

After the defense forced a Tonawanda three-and-out, the Jacks went right to work, starting at their own 49-yard line. A few plays later, Rieselman found senior Nick Sciandra for a 37-yard hook-up to the Tonawanda 1-yard line, which set up Rieselman’s QB-run score on the next play.

“We weren’t worried after they scored that touchdown,” said Wisniewski. “We knew at some point that we were going to face adversity, but we knew that we were the better team. No matter what happened, we were just going to go score. We had all the confidence in everybody. Our line, running backs, me, we just all come together for this one.”

A second Tonawanda three-and-out led NT to go on a nine-play, 5:06 drive starting with under four minutes left in the first quarter and into the second quarter. The drive was extended by a successful fake punt from Sciandra on a 4th-and-12 play at the Jacks’ 48-yard line.

The scamper moved the chains to the Tonawanda 39 to start the offense in the second quarter. Sophomore halfback Sam Heim capped off the drive with an 18-yard score, and another PAT conversion from Sciandra gave NT a 21-6 lead with 8:53 left in the first half.

The Warriors made some progress near midfield on their next drive before a sack from NT’s Drew Kosikowski forced them into a third-and-long scenario, leading to another punt. NT capped off its first half scoring frenzy as Rieselman dialed in and found Sciandra off a flea-flicker for a 63-yard score. NT’s missed PAT attempt kept its lead at 27-6 with 4:27 left in the first half.

The Warriors had their longest drive of the contest as two personal foul penalties against the Lumberjacks extended their drive inside the NT red zone, along with receiving plays from Joey MacDonald and Drew Carey. But a couple of plays from the NT defense forced a turnover on downs with 0:03 remaining in the first half at the NT 9-yard line. The combination of the offense not producing and the defense not making the big plays left Kelly baffled.

“That’s the story of my career here,” Kelly said. For some reason, we’re not able to score. ... Guys aren’t running towards Wally (Wisniewski) to take him away from the coverage and then we run into Wally’s coverage. ... We gave them points in the first half. We gave them points.”

Tonawanda forced NT to punt to begin the second half and marched again into the NT red zone, before Wisniewski made an interception one-handed in the end zone with just over four minutes left to play. Wisniewski intercepted Mangold again in the fourth quarter with a 30-yard pick-and-six, which ended up being NT’s final score of the evening.

Tonawanda ended the scoring on the next play, as Carey’s 75-yard kick-off return made the game a two-score contest (NT 33-20) with 5:52 remaining.

While it was a shortened season, Tomm said this was still meaningful for the NT program moving forward.

“Team 127 restored order. That’s how we look at it,” said Tomm. “This is a three-game winning streak that we’ve had. We took back T-NT. ... You can only do one at a time. Starpoint’s been the class of Niagara County and we went up there on their turf last week. So, we’re really excited about what happened. These guys are going to be proud of us moving forward.”