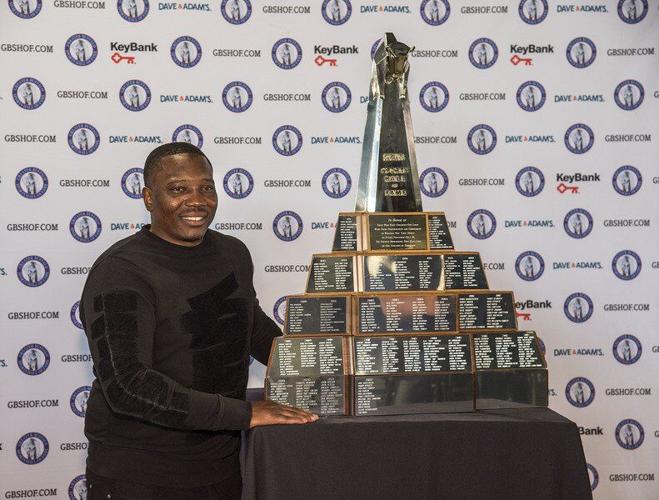 Niagara Falls' Tim Winn, the former LaSalle and St. Bonaventure star, poses with the Greater Buffalo Sports Hall of Fame trophy during a press conference June 8 at Buffalo RiverWorks introducing the Class of 2022. 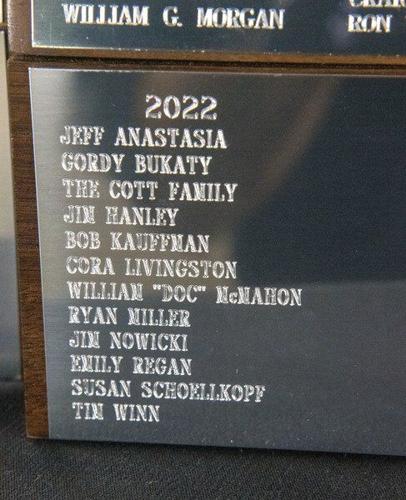 The plaque with names of the Greater Buffalo Sports Hall of Fame's Class of 2022, which has been added to the Hall trophy. 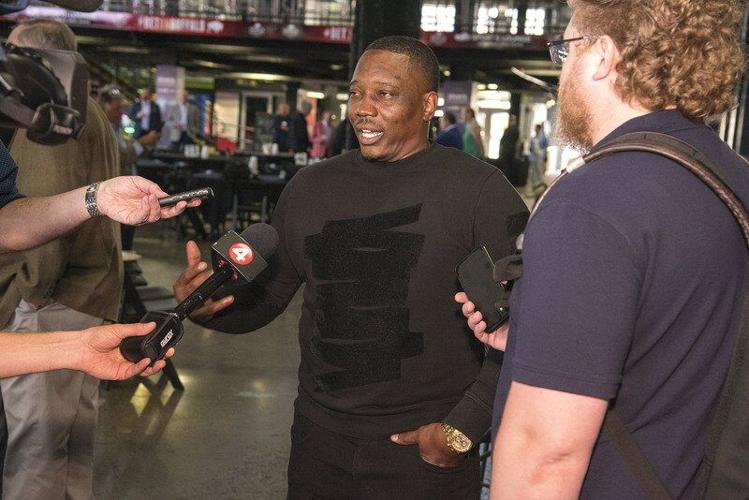 Niagara Falls native Tim Winn is interviewed during a press conference introducing the Greater Buffalo Sports Hall of Fame's Class of 2022 on June 8 at Buffalo RiverWorks.

Niagara Falls' Tim Winn, the former LaSalle and St. Bonaventure star, poses with the Greater Buffalo Sports Hall of Fame trophy during a press conference June 8 at Buffalo RiverWorks introducing the Class of 2022.

The plaque with names of the Greater Buffalo Sports Hall of Fame's Class of 2022, which has been added to the Hall trophy.

Niagara Falls native Tim Winn is interviewed during a press conference introducing the Greater Buffalo Sports Hall of Fame's Class of 2022 on June 8 at Buffalo RiverWorks.

“Get greater later,” Tim Winn is fond of saying. But he recognizes it doesn’t get much greater than this.

Engraving his name on the luminous Greater Buffalo Sports Hall of Fame trophy is a crowning achievement for Winn and the Niagara Falls basketball culture he represents.

“I’m still kind of taking it all in,” Winn said during an introductory event last week in Buffalo for the 2022 class that will be inducted in the fall. “It’s a big deal.”

Leading LaSalle to consecutive state championships in 1995-96, and four years later bringing St. Bonaventure back to the NCAA tournament for the first time in 30 seasons, both his high school and college triumphs made Winn a bonafide Hall of Famer.

“I’m in a couple other hall of fames — but this is the one,” Winn said before reciting the Buffalo sports legends club he will join, with stars of the Bills’ Super Bowl runs also enshrined in the Pro Football Hall of Fame, the likes of Jim Kelly and Thurman Thomas, as well as Naismith Memorial Basketball Hall of Fame members Bob Lanier and Calvin Murphy.

“When you look at the list of names that are included, it kind of separates itself,” Winn said. “To be mentioned in that breath, a kid like me from little old Niagara Falls. To make it to these highlights and acknowledgements, it’s not a better feeling.”

Jody Crymes, backcourt partner of Winn’s on the 1995 championship team, marveled at his childhood playmate “Fat Jack” sharing the spotlight with Olympic gold medalists and all-pro achievers such as class headliner Ryan Miller, who will soon be honored by the Sabres with a banner hanging in Buffalo’s downtown arena and could one day enter the Hockey Hall of Fame.

“It’s a bigger level and a broader scope,” Crymes said. “From Niagara Falls to St. Bonaventure and then into a Hall of Fame like this, it’s really a great accomplishment.”

Winn embodied the relentless full-court force of many Niagara Falls point guards who played before and after him. He joins Dan Bazzani, whose candidacy was enhanced by coaching success, as the only Cataract City basketball players in the Buffalo Sports Hall.

“I feel like I’m carrying this for the city,” Winn said. “You can no longer say we don’t have someone in here.”

Encompassing the whole region, Winn enters exclusive company, and will be the first from his era to receive a GBSHOF ring.

Western New York’s most prestigious Hall of Fame includes fewer than 20 homegrown hoopers, and a few more from area colleges. The short roster of prep stars who also gained local fame in the college game on their way to GBSHOF hasn’t been updated since the induction of “Sugar” Ray Hall, who went from McKinley to Canisius in the early 1980s.

“When you come into it, you’re not really thinking hall of fame,” Winn recollected. “You just want to leave a legacy behind. You want to do whatever it takes to get to that point where you can win. It really just speaks to the dedication I put into the sport.

“And overall it speaks to the teammates I’ve had. You can’t walk this walk alone. I’m here standing in front of you by myself. But there are a million guys behind me. There are a million teammates that were in those trenches with me, and they held me up when I might have fell.”

Winn also played for a pair of GBSHOF coaches, Pat Monti at LaSalle, and Jim Baron at Bona.

“They were different in a lot of ways,” Winn said. “But the one common denominator was that they were super competitive. And that rubbed off on me.”

Winning four Section VI championships at LaSalle, making three All-WNY teams, sharing back-to-back player of the year awards with classmate Jason Rowe, locking down schoolboy star Stephon Marbury in the state playoffs, Winn was recruited to play for Syracuse, Georgia Tech and other major colleges. He turned down those offers to stay in WNY and bring Bona basketball back to prominence.

Winn has enjoyed watching the Bonnies reach new heights in recent seasons, returning to the NCAA tournament four times, receiving a preseason top 25 ranking, and this March advancing the NIT semifinals on the fabled floor at Madison Square Garden for the first time in 45 years.

“It’s supposed to get greater later, right?” Winn reiterated. “When you contribute to taking any team, program or organization to a higher level, you would hope that blueprint gets duplicated down the road.”

Settled in Charlotte after bouncing around professional leagues here and abroad for six seasons, Winn has nurtured his legacy in the Niagara Falls basketball community. “My hand is always on the pulse,” he said.

Winn’s barrel chest swelled when his 25-year-old city scoring record (1,897) was surpassed last season by Jalen Bradberry, the son of one of his LaSalle mentors. He was late arriving to the GBSHOF introduction after stopping to visit another teammate’s son, Roddy Gayle Jr., to share his wisdom before Gayle’s first summer session at Ohio State.

“Those guys, they have access to me 24 hours a day. And I take pride in that,” Winn said. “We’re always having conversations about what it takes to make it. Not just out of Niagara Falls, but once you get there, how to sustain it. How do you step on campus and establish yourself and grow from there.”

Changing into his Train2Winn sweats after the GBSHOF event, Winn went to work with the new breed of ballplayers at NFHS.

“To be the first from my hometown to be acknowledged at this level, it motivates me now to pay it forward,” said Winn, who trains more than 50 Charlotte-area players in his second year hustling alongside a full-time bank job.

Going into a Hall of Fame where so few have gone before, Winn finds greater purpose in coaching the next generation, “to talk to our kids about the possibilities.”

“What is required,” Winn emphasized. “There’s a deeper commitment. A deeper passion. That has to show up to get you where you want to go.”