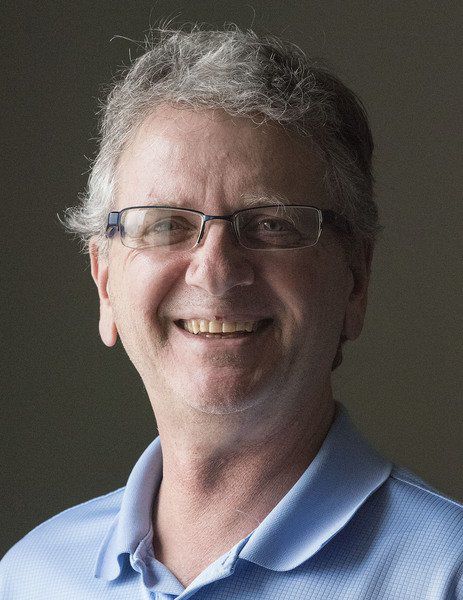 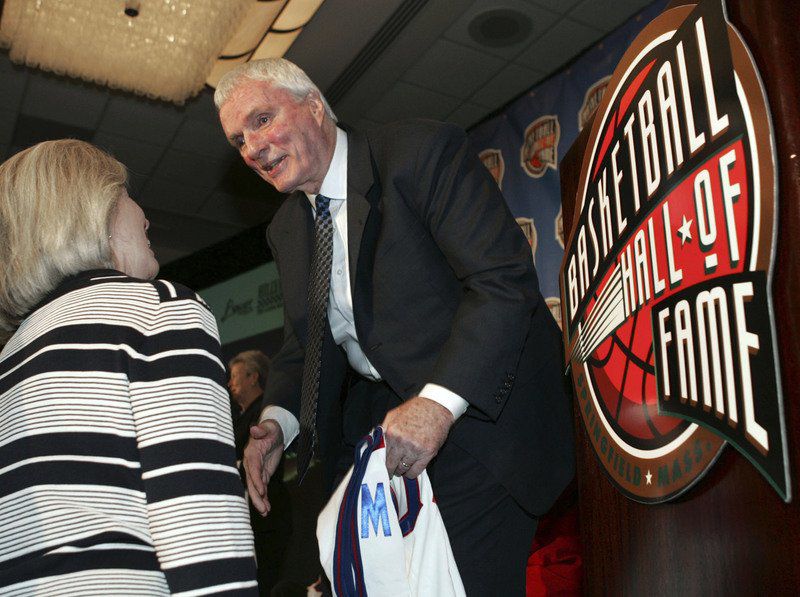 The Associated PressIn this April 4, 2005 file photo, Niagara alumni Hubie Brown, right, receives congratulations after he was presented as one of the newest members of the Basketball Hall of Fame during an announcement in St. Louis, Mo.

The Associated PressIn this April 4, 2005 file photo, Niagara alumni Hubie Brown, right, receives congratulations after he was presented as one of the newest members of the Basketball Hall of Fame during an announcement in St. Louis, Mo.

Hubie Brown laughed when I posed the question. After all you’ve done, have you thought about how tough it will be if the pandemic prevents you from doing NBA playoff games this year?

“I think about that every day,” Brown said from Atlanta, where he is awaiting word from his bosses at ESPN about their postseason plans. “This is my 32nd year doing national television. It’s 32 years of coaching, 32 years doing television. As you know, you get accustomed to going to the games.”

At age 86, Brown still lives for the games. A certified hoop legend and Basketball Hall of Famer, the pride of Niagara University has been the NBA’s resident professor for three decades now, and nothing moves his soul like the mounting drama of an NBA playoff season.

Brown has seen it all in his seven decades in the sport. He made the Hall in 2005, 50 years after graduating from Niagara. Now, like the rest of the sports world, he’s looking forward to late July, hoping the NBA can proceed with its plan to finish the regular season with eight games, then begin its 16-team playoff tournament on Aug. 17.

He’s not sure what to expect. Brown is in the final year of his contract with ABC/ESPN. Normally, he serves as a TV analyst during the first two rounds of the playoffs, then moves to radio for the conference finals and Finals.

“But it’s not my decision,” he said. “The decision will be made by management. So far, we’ve not heard anything about the situation.”

COVID-19 cases are spiking around the country, including the Orlando area where the NBA plans to hold its games in a “bubble." On Thursday, the league revealed that 25 of 351 players had tested positive for the coronavirus.

Brown said the NBA might decide to have announcers work remotely from Charlotte or Bristol, Connecticut, home of ESPN. Jack Armstrong, who lives in Lewiston and does Raptors broadcasts, told me last week that he’ll be doing games remotely.

“So there’s so many major questions,” Brown said. “Anything can happen. But I always stay optimistic, because it’s the most exciting time of the year.”

“The basketball takes a major step upward. Any time you’re part of that, you’re in an atmosphere of the players playing at their maximum level. I’m glad to be a part of it.”

Would the TV honchos worry about exposing Hubie to the virus? There’s been talk of not allowing the NBA’s older coaches to take part. But Mike D’Antoni, the Rockets’ 69-year-old head coach, said he’s not worried.

Brown turns 87 in September. He said he feels fine — though he hasn’t been tested for COVID-19. Still, you have to wonder if he’ll be announcing at courtside next month.

So he sits and waits, spending quality time with his family (he has four children and four grandkids) and catching up on his reading and sports documentaries on television.

“During this period of time, naturally you listen to the scientists and you stay at home the majority of the time,” he said. “The only time you leave is with a mask. I only go to a few different places, and when no one’s there.

“Believe it or not, I’m into my 16th book. It’s keeping me busy and out of trouble.”

Read books? He could write them. Talking to Hubie is like interviewing a basketball encyclopedia. He loves telling stories about the game’s past, and his mind is sharp as a John Stockton bounce pass to Karl Malone on the break.

He also loves baseball. You think you know Niagara history? You might know that Brown, Frank Layden and Larry Costello played hoops at the same time under Taps Gallagher and went on to have distinguished NBA coaching careers.

They also played baseball together for the Purple Eagles in the early to mid-1950s.

“In baseball, Larry played shortstop and batted second,” Brown recalled. “I batted third and was the catcher, and Frank Layden batted fourth and played first.”

In 1951-52, the NCAA allowed freshmen to play varsity sports in what became a one-year experiment. Brown said Costello, who won titles as a player and coach in the NBA, was a great baseball player and might have made the majors it if he hadn’t stuck with hoops.

You were OK yourself, Hubie. The best hitter usually bats third in the order.

“Listen, Larry and Frank were very good. We all had our days. It was a lot of fun. But basketball at that time was major, with those doubleheaders in Buffalo.”

Those were the glory days of college hoops in Western New York. Teams would travel by train to Chicago, then hit the Aud for doubleheaders on the way home. Niagara, Canisius and St. Bonaventure were all major powers in those days.

I’ve been hearing about those doubleheaders since I came to Buffalo in 1989, fresh off covering the NBA. I was lucky to cover Hubie for a time when he was coaching the Knicks. Watching his practices was an education on the game.

He’s still educating me. Until now, I hadn’t realized how good those Niagara teams were in the early 1950s. No offense to Calvin Murphy’s teams, or the two squads Joe Mihalich took the NCAAs. But the three teams from 1952-55 had to be the best in Niagara history.

The Purple Eagles won 22, 24 and 20 games in those years, losing six each season. The three-year win percentage of .786 was easily the best in school history. They were ranked in the Top 20 of the AP all three years and made three straight trips to the NIT, which was more prestigious than the NCAAs back then.

Niagara lost to No. 1-ranked Duquesne in the NIT semifinals at Madison Square Garden in 1954, Brown’s junior year.

“It was Larry’s senior year,” Brown said. “That was probably the best team in Niagara’s history. Larry played in the NBA for 13 or 15 years (14, to be precise). Eddie Fleming, who was in my class, out of Pittsburgh, he played for nine years for Minnesota and the Lakers.”

Fleming played on the front line with Bo Erias, who played in the NBA for awhile, and Charlie Hoxie, who played for the Globetrotters. Backup Tommy Hemans was a top scorer in the old Eastern League.

Brown, who averaged 8.3 points for Niagara as a senior, played briefly in the Eastern League, a top minor league when the NBA had only eight teams. Hubie, ever the historian, was a rich source of information for author Sylvan Sobel, whose book “Remembering the Eastern League,” comes out in 2021.

“So we had a lot of great players,” Brown said. “I mean, it was a great time to be there. But you don’t want to hear about this stuff … “

Actually, I love the history. But like Brown, my favorite period for the NBA is the 70s through 90s. Older folks always think things were better in their day. I feel the league was at its peak in the mid-1980s, with Magic Johnson and Larry Bird in their primes and Michael Jordan in his formative years.

“I always say the 70s and 80s and 90s was probably the best basketball played in the NBA for the intellectual side of the game,” Brown said. “A player not only had to have great talent, he had to have a high IQ because all the teams had thick playbooks and all kinds of sets that were different, with all kinds of options within the set.”

Hubie can get a bit technical. It’s the coach in him. Some say he's the best basketball clinician ever. He’s been raising the IQ of hoop fans for years. Essentially, he thinks the NBA game became less physical when they eliminated hand-checking and hard fouls.

It’s similar to what the NFL did with defensive backs, making it easier for receivers to get free in an attempt to increase offense. Nowadays, it’s all drive and kick for 3-pointers, with less emphasis on crashing the boards.

He’s right, of course. That doesn’t make it a lesser game, just a different one. But it makes it difficult to compare players over time. Brown has no time for such things.

“People ask me, ‘Who are the five best players, the 10 best?’ I refuse to answer them,” he said. “I say, ‘Look, every guy can only be as great in the time period that he plays. Don’t tell me that player cannot adjust if he grew up today. I’ll tell you a great story.”

Brown was at a Hall of Fame dinner. Five former greats were on the dais, answering questions about Tim Duncan. Rick Barry was there, Larry Bird, Magic Johnson. Finally, the moderator gets to Bailey Howell and asks for a few words on Duncan, the ‘greatest power forward ever’.

“He didn’t even get it out of his mouth,” Brown said. “Bailey Howell says, ‘Stop, stop right there!’ There’s silence. ‘There’s only one forward in the history of basketball. Only one. It’s Elgin Baylor.”

Hubie went on and on about Baylor, how he began college on a football scholarship at College of Idaho and was discovered in the gym dominating the basketball players in his free time.

The point is that it’s impossible to compare players from different eras. But it’s clear that Brown is partial to Michael Jordan, who dominated in the smart/physical era he favors, and would never say he’s the best ever — as LeBron James has done.

“Michael would say the same thing every single time he was asked: ‘I would never say that and insult Bill Russell and Kareem Abdul-Jabbar.'

“Is that great or what?”

Brown watched “The Last Dance,” of course, the documentary on Jordan and the Bulls that aired during the spring. He thought it was great, not surprising when you consider his regard for that era.

“The only thing I felt bad about was Jerry Reinsdorf (the Bulls owner) got off easy,” he said. “Jerry Krause took all the heat. He deserved some heat, but he’s still the guy who put everything together.”

Hubie lived through those days. He came of age as an NBA analyst during the time when Jordan was winning his six titles. He’s intimately aware of the league’s inner workings, and you get the sense he knows more than he can tell.

But watching those old games is what really made it for NBA fans. Seeing Jordan lift his team, bouncing up from hard contact, coming through in the biggest playoff moments — that’s the sort of drama NBA fans have been missing.

Brown is one of them, a hoop fan at heart. Seven decades in the game. You think you’ve seen it all until the next thing happens. He’s hoping it works out. He had his six-month checkup on Tuesday at Emory Hospital, and things look good.

“I don’t try to fool them,” he said. “I lay it out for them all the time and hope to Christ I can keep on going.”