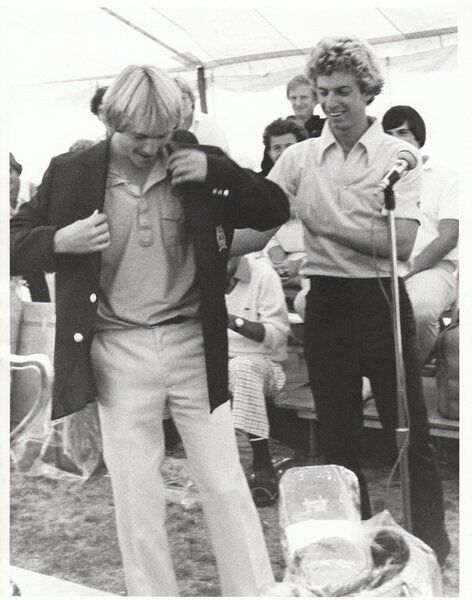 Following the 1979 Porter Cup, John Cook tries on his champion's blazer with a little help from his friend and rival Bobby Clampett. Cook dethroned Clampett, the 1978 champion. 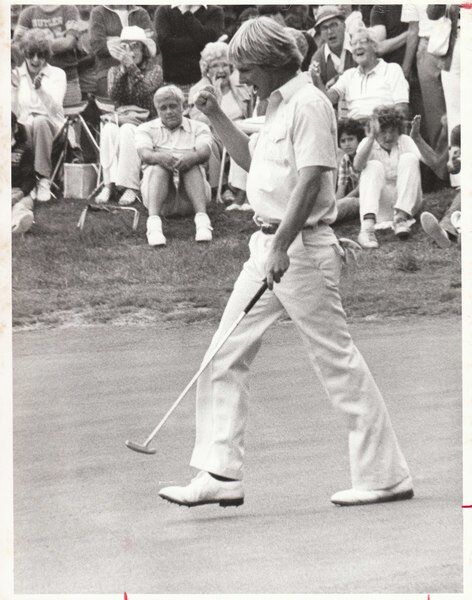 John Cook raises his arm in victory at the 18th green after sinking a 12-foot birdie putt in the 1979 Porter Cup. Cook won a showdown against Bobby Clampett and Gary Hallberg in a match of that year's top-ranked collegians. 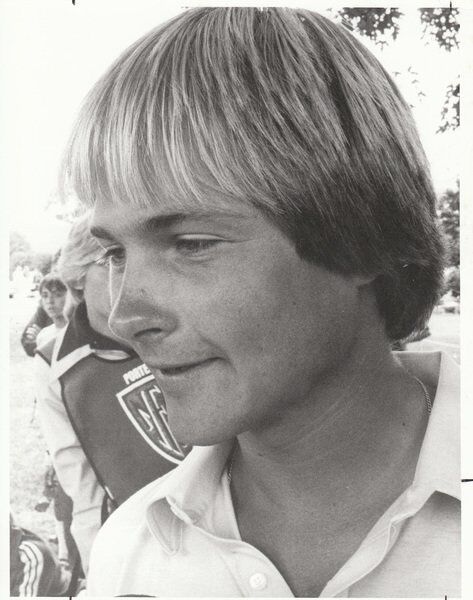 John Cook, an All-American at Ohio State and the reigning U.S. Amateur champion, talks to the media after his 1979 Porter Cup victory.

Following the 1979 Porter Cup, John Cook tries on his champion's blazer with a little help from his friend and rival Bobby Clampett. Cook dethroned Clampett, the 1978 champion.

John Cook raises his arm in victory at the 18th green after sinking a 12-foot birdie putt in the 1979 Porter Cup. Cook won a showdown against Bobby Clampett and Gary Hallberg in a match of that year's top-ranked collegians.

John Cook, an All-American at Ohio State and the reigning U.S. Amateur champion, talks to the media after his 1979 Porter Cup victory.

This is the first of four stories in a series celebrating the tradition of the Porter Cup, which has been played every summer since 1959. The 62nd tournament would have been played this week at Niagara Falls Country Club but was canceled because of the coronavirus.

It was shaping up as a runaway on that windy, cloudy afternoon in the third round of the 21st annual Porter Cup.

Rafael Alarcon, a 21-year-old senior from Oklahoma State, was treating the Niagara Falls Country Club course like his personal playground, outdistancing some of the best college players in the 1979 field by five strokes after 48 holes with no end in sight to his high level of play.

Alarcon was playing in the second of what would be three Porter Cups and was hoping to improve on his tie for eighth in 1978. A native of Guadalajara, Mexico, he had already won two tournaments on the summer amateur schedule and continued playing well as his opening 68 and follow-up 66 would attest. At 6-under par, he had a four-stroke lead after 36 holes and had added another stroke to his advantage in the third round.

While Alarcon was a respected player and considered a solid contender, the tournament spotlight belonged to John Cook, Bobby Clampett and Gary Hallberg.

Cook, 21, a senior at Ohio State and winner of the U.S. Amateur in 1978, had won the Ohio, Sunnehanna and Northeast amateurs in 1979 and was the medalist in the Broadmoor Invitational. He had finished 39th in the Masters, was low amateur in the U.S. Open, was co-champion of the Big Ten Tournament and finished 13th in the NCAA. As he said later, "It was quite a summer."

He had tied for sixth, nine strokes behind Clampett in the 1978 Porter Cup. That was the year the Brigham Young star opened with a 75, pondered withdrawing and then set a course and tournament record with an 8-under 62 the next day. A 70 and a 65 put the finishing touches on a two-stroke victory over Jay Sigel.

Hallberg, Wake Forest's best player and the individual champion at the NCAA tournament in June, had played for the victorious 1979 U.S. Walker Cup team and had won the North and South tourney in Pinehurst, N.C. He was high on the list as a potential Porter Cup champion. He tied for fifth in 1977.

Bob Tway, a teammate of Alarcon's at Oklahoma State, played with him in the second round and even with a 66 said he had seen him play better. "He keeps the ball in play, he's a good putter and he thinks well. He doesn't hit any dumb shots."

Whether they were "dumb shots" or not, the shots Alarcon started to hit at the par-5 13th hole that day in the third round ignited an historic collapse unmatched in Porter Cup history.

He bogeyed four consecutive holes to fall to 1-under for the tournament, but the worst was yet to come. The narrow fairway at the par-4 17th hole has seen a number of players hit out of bounds over the years and Alarcon did it twice on his way the a quintuple-bogey 9.

Shaken by that, he pounded his tee shot over the green at the 180-yard par-3 hole, adding a triple bogey to his implosion. In the final six holes, he went from 5-under par to 7-over, a swing of 12 strokes. He shot 83, 47 on a back nine where he posted a 32 the day before. He dropped into a tie for 19th.

Stunned by it all, Alarcon tried to make light of demolishing his championship hopes while talking to reporters but Tway, standing with him, said "It's not all right."

Calling it the worst six holes he had ever played, Alarcon said "I couldn't understand what was going on. I still can't. There's always tomorrow. A 59 would be okay."

Strong winds figured in higher scores and Hallberg was the only one to put up a red number, a 69 that left him 2-over and leading the tournament by one over Clampett, who oddly enough gained ground with a 73. He was six behind going into the third round and Hallberg and Cook were nine back. Now, to their surprise, they were bunched within two strokes at the top of the leader board.

Hallberg was bubbling with joy. "I'm very surprised I'm leading. I didn't wish any bad luck on my opponents, but the golf course was overpowering. No one could handle it today."

Clampett was upset about Alarcon's demise. "Ralph is a good friend of mine. It bothered me to see him playing so wild. He's had a good season and I wanted to see him play well."

The final lineup delighted Tournament Director Bill McMahon and his assistant Ed Rozek. They weren't about to pass up the chance to pair that year's most celebrated amateur players in the final group.

"I remember playing that final round with Bobby and Gary," Cook said years later. "I played with Bobby a little bit on tour, and Gary, but that was the only time we were ever paired."

"This will be an interesting finale," Hallberg promised. If it was anything like the NCAA Tournament, it would be memorable. Hallberg won the championship over Clampett by a stroke and Cook was on the Buckeyes' championship team and in the running for the individual title.

The large gallery that Saturday under sunny skies watched Hallberg establish a two-stroke lead through an uneventful front nine, but his second shot at the par-4 10th hole landed in the bushes behind the green. He double-bogeyed and said later "I threw the tournament away at 10."

With eight holes to play, the trio was tied. Hallberg and Cook birdied the 11th, leaving Clampett behind by one. But the reigning champion turned it up a notch with birdies at 13 and 14 and an eagle-2 at 15. That gave him a three-stroke cushion over Cook and four on the fading Hallberg. After his tee shot banged off a cart, keeping the ball from going under the trees at the par-3 16th to help him save par, it appeared the golf gods were favoring Clampett.

"After his eagle at 15 and getting up and down at 16, I thought it was over," Cook said despite gaining a stroke with a birdie at 16.

Clampett didn't see it that way. "I didn't feel secure," he said. "You can't feel secure in this game especially with players like Cook and Hallberg breathing down your neck."

Sure enough, Clampett's tee shot landed a few inches out of bounds on the left side of the 17th fairway. He walked part way down to see where it was and asked course marshall Earl Brydges Jr. if it was out of bounds. Brydges said "I think so." Without asking for an official ruling, Clampett said "the hell with it" and teed it up again.

That led to a double bogey, giving Cook a chance to tie it, but his par putt trickled left for a bogey. He and Clampett were a stroke apart going to the tricky 18th with the pin tucked in its usual final-round location behind a bunker on the right side.

Cook drilled a 2-iron to 12 feet from the pin and Clampett's 3-iron shot got caught in the wind and landed in the bunker. He blasted out about 30 feet past the hole and his par putt coming back barely missed. Cook rolled home the birdie putt to win the title, pumping his fist as he went to retrieve his ball from the cup. Call it a walk-off. He didn't have sole possession of the lead until the final putt and it took a 4-under 66 to get it done.

Cook, a Toledo, Ohio native who was living in California in 1979, said he was happy with the win, but it didn't compare to the Buckeyes' victory in the NCAA.

"My main goal was to play on an NCAA championship golf team. I've always been a Buckeye fan," he said.

On to the pros

Cook, now 62, turned pro the next year. He and Clampett met up again in 1981 in a five-man playoff in the Bing Crosby Pro-Am. Cook prevailed over Hale Irwin for his first of 21 professional victories, 11 on the PGA Tour where he earned more than $12 million, and 10 on the Champions Tour where he still competes occasionally.

Clampett, 60, is a former TV golf analyst and played on the PGA Tour from 1980 to 1995. He joined the Champions Tour in 2010 and co-authored the book "Impact Zone: Mastering Golf's Moment of Truth," dealing with the intricacies of the golf swing.

Despite the high expectations coming out of college, he won only once — the 1982 Southern Open — on the PGA Tour. He experienced an Alarcon-like collapse early in his career. Leading by seven strokes five holes into the third round in the 1982 British Open at Royal Troon, his game went into a tailspin. He shot 77 and 78 in the final 36 holes and finished tied with Jack Nicklaus for 10th.

He later abruptly changed his swing with devastating results. He enjoyed only two top-three finishes for the remainder of his career and never won again.

Alarcon returned to the Porter Cup in 1980 and tied for sixth. He played on the PGA Tour for a time but is better known in Mexico as a golf instructor, at one time mentoring the LPGA's Lorena Ochoa.

Bill McGrath is a former Gazette sports editor and author of the book, "Porter Cup Fifty Years." Contact him at scoreboard@gnnewspaper.com.