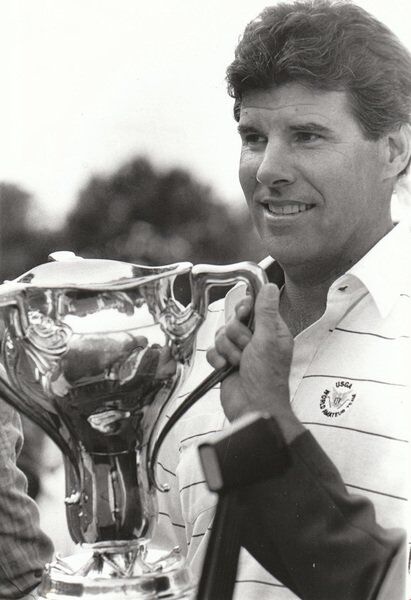 Jay Sigel is presented with the Porter Cup during the awards ceremony in 1987 after beating Nacho Gervas on the second hole in a playoff at Niagara Falls Country Club. 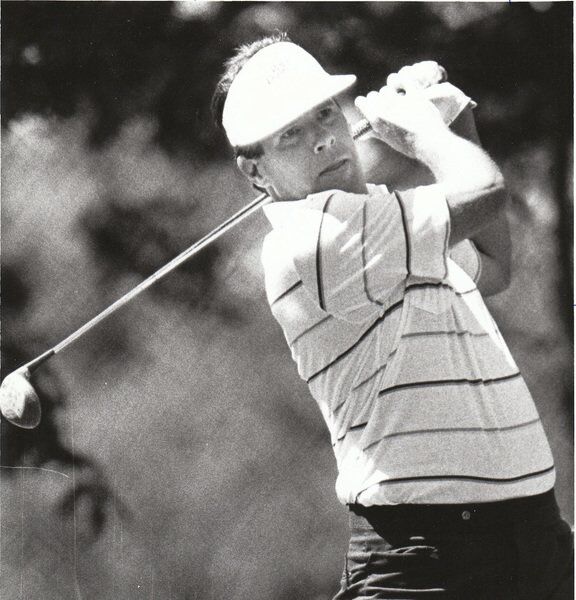 Jay Sigel tees off in the 29th Porter Cup at Niagara Falls Country Club in 1987. He won in a playoff to earn his third title, becoming the only player to win three. 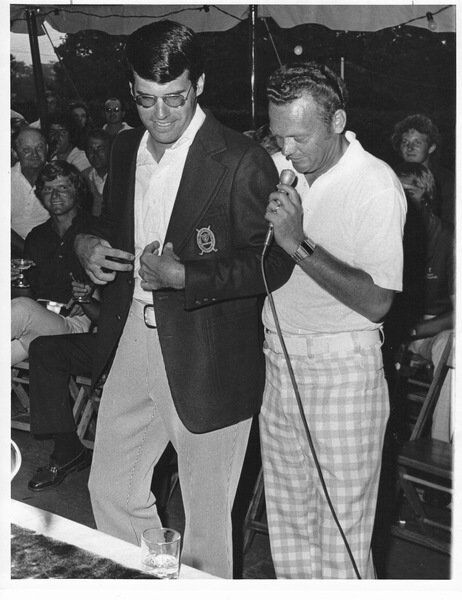 Bill Harvey, right, the 1963 Porter Cup champion, helps Jay Sigel put on the champion's green blazer after the latter won the 1975 tournament. It was the first of three tournament victories for Sigel, still a record.

Jay Sigel is presented with the Porter Cup during the awards ceremony in 1987 after beating Nacho Gervas on the second hole in a playoff at Niagara Falls Country Club.

Jay Sigel tees off in the 29th Porter Cup at Niagara Falls Country Club in 1987. He won in a playoff to earn his third title, becoming the only player to win three.

Bill Harvey, right, the 1963 Porter Cup champion, helps Jay Sigel put on the champion's green blazer after the latter won the 1975 tournament. It was the first of three tournament victories for Sigel, still a record.

This is the second of four stories in a series celebrating the tradition of the Porter Cup, which has been played every summer since 1959. The 62nd tournament would have been played this week at Niagara Falls Country Club but was canceled because of the coronavirus.

When Jay Sigel came back to Niagara Falls Country Club for the Porter Cup's 50th anniversary celebration in 2008, he jokingly put his record three victories in perspective at the Champions Dinner.

After acknowledging he played in 28 events, most of any tournament he ever played in, he said, "3 for 28. I couldn't even make the Phillies with that average."

But don't let him fool you. He finished in the top ten 22 times (.786 average), including 16 tournaments in a row, and finished second or tied for second five times. Not bad for an 18-year-old player who arrived for his first Porter Cup in 1962, couldn't tell you where he finished (seventh), but vividly remembered how cold the August weather was in Lewiston — an unseasonable 55 degrees that day.

Twenty-five years later he had won two championships — 1975 and 1981 — and had established himself as one of the best amateurs to ever play the game. He was so consistently successful for so long he earned the nickname "Mr. Amateur."

He came close to a third Porter Cup victory in 1982, but he had no luck with his putter in the last round. He could have sent the tournament to a playoff against Nathaniel Crosby but missed a short birdie putt at 18. "I couldn't hit a better birdie putt," he told reporters that day. "It just wasn't my week. That's all there is to it."

How does he remember it? "I never speak to what could have been," he said recently of the disappointment.

Five years later he was still looking for that unprecedented third championship. He was not obsessed in his pursuit but the tournament meant a lot to him, noting that he had so many friends at NFCC rooting for him every year. And a third Porter Cup would fit nicely on a resume that included back-to-back U.S. Amateur titles in 1982 and 1983 and many more significant achievements.

"The Porter Cup was one of the majors, certainly to me," he said in a phone interview last month. "Those were my pinnacle events of the year."

He was 43 in 1987 and only one player had won the championship at that age, Ed Tutwiler in 1962 by a record nine strokes.

The 29th Porter Cup would be a major challenge. Reigning champion Nolan Henke was back and four of Sigel's teammates from the victorious 1987 Walker Cup team were in town, including mid-amateur standout Bob Lewis Jr., Billy Mayfair, Len Mattiace and Brian Montgomery. Mike Bradley, runner-up to Scott Verplank in 1985 and to Henke in 1986 was back for another crack at the title.

When the dust cleared after 54 holes, however, it was newcomer Nacho Gervas leading Sigel, Mattiace and Miles McConnell by a stroke. His 5-under 65 was the best round of the day. Sigel had been leading after 12 holes but a double-bogey at the par-5 13th hole dropped him to 2-under for the tournament.

"I hit it over the green and that's the only place you can't hit it there," Sigel said. He left his next two shots in the grass and took a seven.

Gervas, 22, a native of Madrid, Spain, had completed his college golf career at Georgia Tech and had won the Rice Planters in South Carolina, another major amateur tourney, earlier that summer. The Porter Cup would be a signature victory. He said he would "just go out and hit it and see how it goes" in the final round.

He hit it pretty well and opened a four-stroke lead over Sigel with eight holes to play.

"I was trying to be the first to win a third Porter Cup, had not won in a while and got behind," Sigel recalled. "Nacho was tough. He got it up and down from everywhere. That was exceptional. He was great."

The tension mounted after Sigel shaved a stroke from the deficit with a birdie at 12 and another when Gervas bogeyed 13. By now the championship battle was down to the two of them.

Sigel, looking more determined than ever, powered his tee shot over a bank of trees at 15 to the middle of the fairway to set up a birdie try from about 15 feet. It turned out to be more difficult than it appeared. The putt "broke about four or five inches," Sigel said. When it dropped, he was tied with his younger opponent.

Gervas had to save par at all three of the finishing holes to survive Sigel's surge. They were tied going to 18 and Sigel remembered some disasters at the par-3 hole that cost players championships, including former NFCC pro Denny Lyons, who hit his tee shot on to Mountainview Drive in 1966.

"It's a tough green to hit," Sigel said. "I was proud to get close to the hole, about six feet. Then I hit it five feet by. Now I could three-putt. But I made it."

Gervas had to work his magic again at 18, chipping from the rough about 50 feet from the pin and saving par from two feet.

Tied at 2-under 278, they started the playoff on the par-4 first hole. "He was young and I had experience on my side, but that doesn't get you any good shots. I was calm, but excited," Sigel said. "The first hole is one of toughest holes on the course. There's always a wind and we had that. I can picture the pin on the right side of the green and I put it in the bunker. Even worse, it was a fried egg."

Sigel recalled Gervas had a "sure par and I hadn't played my third shot. I went in there, blasted out to about eight feet and made the putt. That made me happy, to say the least. To come back from four down and it looked like I would lose it at 18. Now a bunker shot."

His scrambling to survive for another playoff hole was rewarded when he hit his drive to the center of the fairway on the par-4 second hole. Gervas pulled his drive left under a stand of trees. He nubbed his second shot out into the rough well short of the green.

"My club caught in the branches. I couldn't stop my swing, hit it fat and couldn't get it out," Gervas said.

Sigel was in birdie range and watched as Gervas' third shot landed on the dried out green and rolled into the back rough. Sigel two-putted for the par that made him the first and only player to win the Porter Cup three times.

The third title was by far the most difficult to attain. In 1975, under gray and threatening skies in the final round, he shot a 69 to win by a record-tying nine strokes. He became the fourth player to win twice in 1981 when he birdied three of the first five holes in the final round to win by two shots.

Sigel played his 28th and final Porter Cup in 1993. By that time he was seriously considering turning pro. He would be 50 in November, making him eligible for the Champions Tour. But it wasn't an easy decision.

Sigel had been concerned not so much that he would be overmatched on tour, but he would be giving up an identity he had worked so hard to achieve.

In a column for Golf World in 1998, he wrote “I was Jay Sigel, Mr. Amateur, the guy with the record nine Walker Cup appearances. That’s how I was known to the public and that's how I perceived myself."

He realized he was mistaken. “When I was making my decision, Jack Nicklaus told me that what I had accomplished as an amateur could never be tarnished. It was in the books for good. He was right."

Sigel would have turned pro more than 25 years earlier had it not been for a serious hand injury suffered at the end of his sophomore year at Wake Forest in 1963. He reached for a closing door while following a fraternity brother out of the dorm, missed the frame and put his hand through the glass.

He was in the hospital for 10 days, all the while wondering if he would be able to play competitive golf again. He said the laceration severed a nerve in his left hand and cut through some tendons. It required 75 stitches.

The nerve was reattached and throughout his career he said he was grateful to have 65 to 70 percent feeling in the hand. The injury kept him out of the 1963 Porter Cup but it led him on a path of success in amateur golf unmatched since the days of the legendary Bobby Jones.

His debut on the senior circuit in 1994 resulted in the Rookie of the Year award. He rallied from 10 shots down in the final round and beat Jim Colbert in a playoff in the GTE West Classic for his first of 10 pro victories. He finished in the top ten 14 times that year. He retired in 2015 after 22 years, earning more than $9 million.

Jay is a Senior Vice President with CBIZ Life Insurance Solutions, Inc., outside Philadelphia. He has been in the insurance business for more than 45 years while also dedicating his time to numerous charities. He and his wife, Betty, have three daughters: Jennifer, Amy and Megan.

Bill McGrath is a former Niagara Gazette sports editor and author of the book, "Porter Cup Fifty Years." Contact him at scoreboard@gnnewspaper.com.