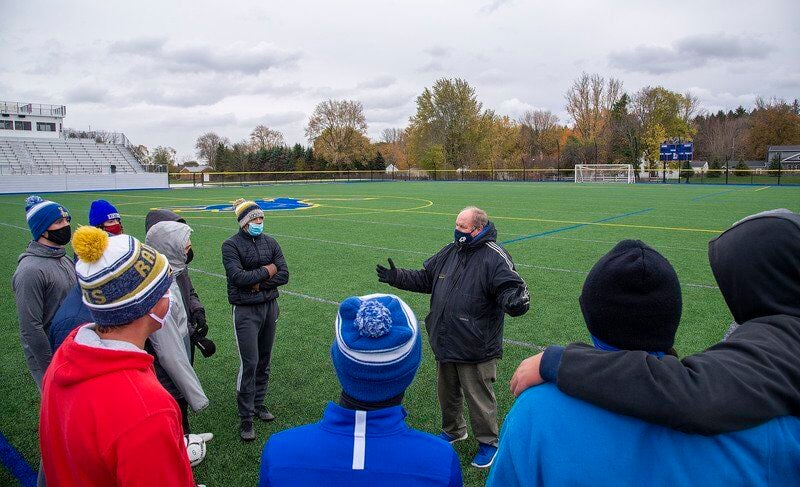 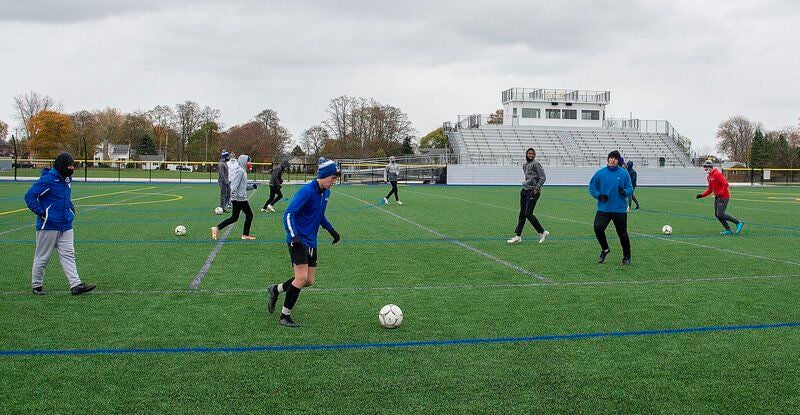 LOCKPORT — The Niagara Frontier League's best-kept secret may just be its best team.

In a year where many were just happy to have a season, Lockport boys soccer seized the day. The Lions are 11-1-1 (10-1-1 NFL) and are the Niagara Division champions, setting themselves up against Grand Island for a shot at their first league title since 2012. That season, Lockport finished 18-1 and fell to Clarence in the Class AA sectional championship game.

"We've got talent all around, I mean that's the thing, and I love that they're together as a team," said head coach Jeff Hulshoff. "They play as a team, they (have) camaraderie as a team ... I wasn't expecting that, I really wasn't, I have to admit."

Assistant coach Anthony Molinaro piggybacked off Hulshoff's feelings, sharing how much of a "brotherhood" it's been this season. That brotherhood makes him recall the moment when the Lions were down a man against North Tonawanda on Oct. 24 and the game had to be rescheduled due to weather.

Once play resumed, Lockport was down two players with red cards. Despite the Lions' nine going up against the Lumberjacks' 11, Lockport was able to pull out a 3-2 victory in overtime.

"We dug down and I think they all realized they built this trust among themselves to understand we can do this," said Anthony, whose son Michael assisted Reilly Boyer on the game-winning OT goal in the 84th minute.

Hulshoff looks at that moment as the springboard for his squad, which was a part of the team's recent seven-game winning streak. In the action since that Oct. 24 game, Lockport has held a 23-5 margin over its opponents.

One of those seven wins came against GI on Oct. 26, the game in which Ricky Maye and Brayden Velia both couldn't play after those red cards against NT.

Lockport's other turning point and lone blemish was a 1-0 defeat at Lewiston-Porter, where the Lions fell on a self goal that a Lancer tipped in off the bounce. That led to some adjustments, like moving Boyer up top in the unit, which has resulted in his league-best 20 goals and 11 assists.

Boyer's new position adds to Lockport's strength in the middle of the field, as the younger Molinaro, Kevin Daskavitz, Tommy DiMillo and Logan Wendt all dwell in the area.

Swapping out Velia for sophomore goalie Daniel Fiegle has also been beneficial, as Velia has contrIbuted offensively with three goals and four assists, and Fiegle has led a defense that's yielded just eight goals in the last seven outings.

And to think, the 2020 season was in jeopardy back in September.

" ... We're locked in, the boys have checked in, we found a true team amongst I guess what started out to be a what-if season," Molinaro said. "Are we gonna play? And when it was time to go, it's been go. We've been able to have fun with it. Like coach (Hulshoff) said, we've built up, we always like to build from the back and up through the middle and boy has that really shown us and put some smiles on some faces on our parents and ourselves."

The coaches also talked about how gritty this bunch is. Like having to work through two reschedules of a Kenmore West matchup, or playing games after having practices cancelled with COVID-19 contact tracing infiltrating Lockport High School, the Lions have pushed through and came out as cleanly as they could have.

With a league championship and a full roster in line to play Thursday, Lockport is excited for what's in store.

"I think our chances are great. We started out the season strong and we've continued strong throughout most of our games," said Boyer, alluding to the team's 4-0-1 start in which the Lions did not allow a goal through their first three games. "We're something to be reckoned with and GI's gonna have to deal with that."

Velia chimed in as well, sharing how important the Lew-Port loss was.

"That Lew-Port game, that was tough, that loss. It really hurt us, but I think it kind of bettered us too," Velia said. "Because from that loss we learned and now we're on what, a seven-game win streak? Ending it as NFL champions (or of) the section, we're looking strong. So I think that brought us together, that loss."

Ricky Maye has been the biggest revelation for the Lions, as the Lockport running back has found his way on the pitch with 10 goals and two assists. Knocking off defending sectional champion Niagara Wheatfield in the opening game was a sign that Maye took note of, giving him and the team confidence for the season.

His normal fall plans were derailed, so Maye has just been trying to do his part.

"(I) just come out here, bring a great attitude, leadership, (and) help my teammates win what they want to win," Maye said.

Having earned a share of five NFL titles and the 2005 Section VI championship in his tenure, Hulshoff knows a thing or two about strong Lockport soccer teams. He believes this team has the chances of reaching those same heights.

"We're planning on it, I don't know if it'll happen," said Hulshoff, whose Lions are the No. 2 seed in the Class AA playoffs. "But they're good enough to do that. Let's put it that way."

Lockport and GI square off at 6 p.m. Thursday at Niagara Wheatfield High School.