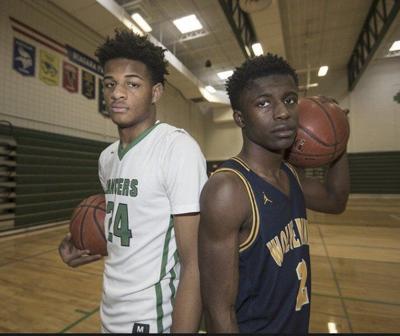 Gayle shined with 16 points, seven rebounds, four assists and two steals, knocking down two treys while shooting 6 for 10 in just his fourth game with his new team. But the Ohio State commit was also slowed by five turnovers in his first start of the season.

Lightfoot, 247Sports.com's No. 24 point guard in the Class of 2022, secured the win, despite the slimmer stat line (6 points, 2 rebounds, 1 assist). The numbers don't show how Lightfoot flashed defensively, though, and he made a few highlight plays, including a buzzer-beating jumper to close the first quarter and a fade-away 3 over his childhood friend in Gayle.

The Gayle-Lightfoot matchup brings up a question many have pondered in recent years: what if Niagara Falls High School hadn't lost out on its rising stars?

Carlos Bradberry may be more qualified than anyone to start this discussion, as he coached many of the top names to come out of the Falls over the last 15 years on the youth circuit and on Sal Constantino's championship staffs with the Wolverines.

Bradberry, Jalen's father, helped bring championships to the old LaSalle High School in the 1990s and played at two Division I programs, so his eye for talent is valid.

Working with many of these kids since they were seven or eight, Bradberry said you could see how they were picking up skills at an advanced rate. It's just made for a more enjoyable experience "watching from afar," as most of them have gone their separate ways.

The team he really would have loved to see was the 2018-19 squad, when Lightfoot, Jalen Bradberry, Josiah Harris and Turner took the Wolverines to the state final four, where it lost to eventual state champion West Genesee. That team could have also featured then-Lewiston-Porter stars Gayle and Scott, who instead led the Lancers to their first Niagara Frontier League and Section VI championships in over 30 years.

But when you go deeper, the roster had even more possibilities. That was the same year Falls natives Haakim Siner and Avion Harris helped Cardinal O'Hara to a 26-2 season, a Catholic state title and a trip to the New York State Federation championship game.

So there was potential for a starting five with Lightfoot, Bradberry, Gayle, Siner and Taylor Sanders, who ended that Wolverines' last state final four run on the sidelines after contributions as a sharpshooting swingman.

Thinking of that lineup, and a bench with Moran Montgomery, the Harrises, Scott and Turner, the elder Bradberry could only imagine what could have been.

"That team would've been easily 10 deep," he said. "Ten deep where you probably don't miss a beat when you sub a guy in at all. ... The hardest part, I think, for a coach would be basically figuring out a way to include everybody and keep everybody happy."

Bradberry does not think it was out of the question for this group to spark a four-year state title run, with Federation championships in the mix too. Since 2018-19 was Lightfoot and Gayle's freshmen seasons, last year's team could have added Niagara Falls' Bryce Smith in the post and Mehki Starks, as he played a key role for Matt Bradshaw's Lew-Port Lancers.

Comparisons are hard to avoid, knowing the basketball history in the Falls. Bradberry knows the 2004-05 Class AA state title team is the gold standard in many circles, and his LaSalle teams cannot be forgotten, having won two state championships in a run of 10 of 11 Section VI titles under Pat Monti from 1989 to 1999.

But he doesn't think it was far fetched for the hypothetical Niagara Falls team to reach that level. The closest thing we got to that was the Niagara Catholic modified team from 2015-16. Gayle, Lightfoot, Jalen Bradberry and Starks dominated as seventh graders, often beating teams by 60 without using fast breaks in the second half.

LaSalle Prep Middle School teacher and GNN Sports freelancer Dave Yarger remembers the buzz that team was already getting in the halls of the high school, as the Niagara Falls '14 alumnus recalls. That's when things all switched up.

Jalen Bradberry took off first, heading to Niagara Wheatfield for 2016-17 and starring as an eighth grader, eventually earning five Division I offers. After Gayle and Lightfoot reclassified that year, they would both be key contributors as eighth graders for the Wolverines' Section VI Class AA championship team in 2017-18.

Just across town, Bradberry was back at Niagara Catholic, along with Siner, Turner and Starks. They led the Patriots to the Class B Manhattan Cup title in the school's final year of operation.

Seeing the 2018-19 final four run firsthand, Yarger also feels a Falls dynasty was on the table.

"If this team stays together until 12th grade, you're talking at least one state title, if not more," Yarger said.

Lightfoot, Gayle, Bradberry and Turner would have garnered most headlines for their offensive prowess. But that's why Yarger would have loved seeing Avion Harris with this group, due to his "no one's gonna get by me" defense that would do any Falls guard proud.

He would prove to be a viable scorer late in his career, though, as Harris scored his 1,000th point with a 41-point performance in last season's Woj Cup final.

As sad as it was to not see them all come together, Yarger is just glad the kids made moves to not only seek out better competition, but also furthering their educations to prep for the next level.

It's the evolution of what high school basketball has become. But Yarger thinks these kids will always be proud of their hometown, no matter what.

"I know sometimes the Falls gets a bad rep and everything, but in the end, these dudes made a decision to not only further their basketball lives, but further their education as well," Yarger said.

" ... If you have a chance to better yourself, and challenge yourself at the same time, you've gotta go for it. So that's the main thing, I don't want people thinking, 'This is what they could've had, why did they ruin it?' I don't really think that way. I do think they had the potential to be an absolutely stud team if they were all together. But that's not how life works sometimes.

Yarger continued: "I think the Willies, the Jalens, the Roddys, they should all be appreciated by this community. Because there's three top-level basketball players and kids in this area that are going out and making names for themselves. And you know what? They're still wearing Niagara Falls on their backs, they're still representing the city."

Chad Andrews, creator of TheViewFromCentercourt.com, has become a staple in WNY basketball culture over the last decade. So he's qualified to concur when it comes to how great this hypothetical team could have been.

"They would have been an all-time Western New York team, without question," Andrews said.

The bar is the Falls' 2004-05 state champion, which featured the likes of Jonny Flynn and Paul Harris. Andrews wouldn't claim this team to be better. But he believes it'd at least be a rival.

Outside of talent, his reasoning is they'd be forced to adjust to playing on a talent-laden roster early on, rather than being the go-to option on their respective teams. He also thinks a loaded group like this could have led other players to transfer to the Falls in order to take their shots at WNY history.

"Sometimes kids end up showing up at a school that maybe wasn't their school originally," Andrews said.

"I feel like you put all that talent at Niagara Falls, there's other people showing up at Niagara Falls too. Maybe there's a kid that we've never talked about before, who makes it his mission to keep himself eligible and get on that team, that otherwise didn't find the motivation to. There's so many other variables that could come into play to really put the whole situation over the top.

"I think good players want to play with good players. I think they would've attracted talent."

Andrews also looked at the flip side, noting being home may have meant some of the troubles kids avoided by moving could have gotten in their way. It's all a hypothetical, though, so he chose to stick to his basketball fandom and how fun this group could have been.

The only hypothetical Andrews wanted to harp on was the type of spectacle the Wolverine home games would've been — in this dream world, there's obviously no pandemic.

It was all just a hoop dream. Here's to hoping we get high school basketball back again one day.

Respond to sports reporter Khari Demos on Twitter @riri_demos or at khari.demos@gnnewspaper.com. Also, be sure to listen to the GNN Sports Podcast, on Spotify, Anchor, Apple Podcasts and more.