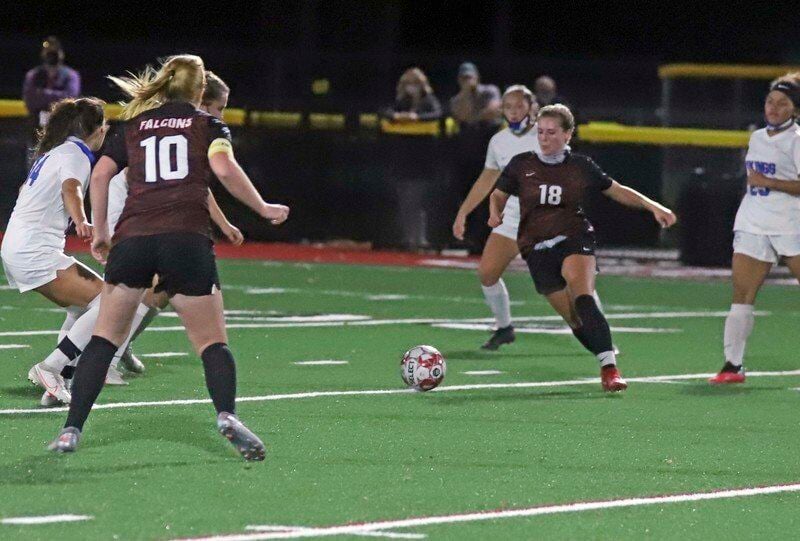 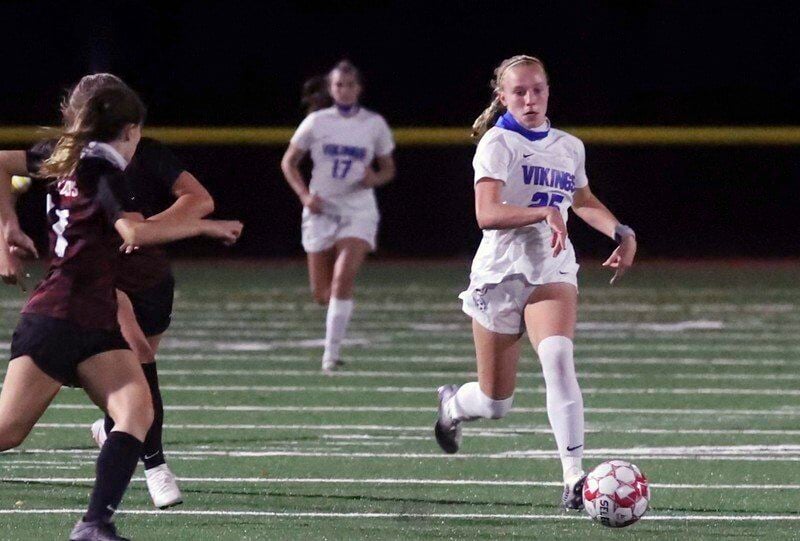 That’s the saying every sports fan has heard quite a few times in their lives.

The Lady Vikings, coming in as the Frontier Division winner, and the Lady Falcons, Niagara Division champs, have made defense a top priority all season. Both teams come into the crossover title game giving up seven goals all season.

The defensive side of the ball is overlooked in many sports, especially soccer, but for these two teams it’s what has helped get them as far as they have this season.

Grand Island coach Dave Bowman said his defense is vital to getting wins and is what, in turn, helps his offense get opportunities.

"It's huge for us," Bowman said. "We have a solid offense and three girls who have scored in double digits, so it's the first noticeable thing."

Bowman added that even if his offense is having an off night, he can count on the defense to limit the opposing team's opportunities.

"Then we just need to take advantage of a couple opportunities. But the defense is huge and we're very pleased with them. We have a few seniors and they're confident in the way we play," he said.

On the other side, Lady Falcons coach James Blankenship stressed the importance of defense to good soccer teams.

“Defense on any team is the pinnacle. They’re stopping the goal scorers on the other team. The saying goes, ‘defense wins championships.’ Strong defense will pull you out of any tight spot you might be in,” Blankenship said.

While the two teams pose stellar defenses, they both possess some intimidating playmakers offensively.

For Grand Island, Payton Khadra, Avery Mondoux and Ella Rudney pack a heavy punch, as the trio has accumulated 38, 49 and 47 points, respectively.

While the three gather much of the attention for their offensive output, Bowman credited the girls on the defensive end, who keep opportunities to a minimum.

Goalkeeper Rebecca Schultz has held it down between the pipes, giving up just two goals this season.

"Any time they have an opportunity, I know we have a strong chance of turning it away," Bowman said of Schultz. "That gives you confidence."

Additionally, Bowman praised the play of senior captain Camille Burruano. The three-year Lady Viking is the anchor of the GI defense, a solid and physical force and clears the ball well, Bowman said. The play of Burruano has also helped fellow defenders Adison Fike and Callie Sommer, as Bowman said they all kind of feed off each other, the duo has done a very nice job on the outside of the defense.

Meanwhile, NW has fifth-year varsity star Erin Weir, who is tied with Mondoux for the NFL lead with 49 points. Additionally, Gianna Rosati, Gwen Jarosz, Marisa Rickard, Maddi Fike and Marisa Zarcone all have over 18 points.

Despite the plethora of offensive weapons, Blankenship credited his defense for the way they’ve held teams down.

He praised the work of captains Sara Mueller and Olivia Rickard, in addition to defenders Jarosz, Lindsey Hocking, Sara Maghrak, Gianna DiFiglia, Natalie Lozo and Brooke Meissner then said, “I have eight defenders and they can all play big. They all step up big. I can’t ask for a better defensive unit.”

The two teams faced off once this season, with Grand Island coming out victorious, 3-0, in a weather-shortened contest.

Both coaches said they took a little bit from that game, despite the trimmed time due to severe weather.

Blankenship said he felt confident in a comeback for the first game and said he feels his team will come out stronger this time around.

“We’re gonna come out a little stronger than the last time we saw them. Our defense should hold it down against them and give us the results we’re looking for. … At the half we got together and talked, we switched things up and we started to get more pressure,” Blankenship said. “Going into this game, I think we’ll be a little stronger and we’ll be able to handle the press that they put on us.”

Bowman credited the Lady Falcons and said the Lady Vikings found out that NW was good as advertised and that this title game will be no walk in the park.

"It confirmed to us that they are solid. They have some great players, and they have some that really step up. We know we have to pay attention to their key players, but we have to be aware of others that can make plays," Bowman said. “They're gonna want us. They have something to prove. They want to prove that they could win, because they had the shortened game the first time. And anything could've happened the last time. I was comfortable going into the second half of that game, but they're gonna wanna get us back for that loss."

Grand Island has been a poster child of success in the Niagara Frontier League. Since 2000, the Lady Vikings have won the NFL title 15 times.

In 2019, they lost the championship game to North Tonawanda, and Bowman said, he hopes his team brings the title back home.

"It would be great. We want people to realize that this was just a one-year thing. We had a bad game last year," Bowman said.

Meanwhile, for Blankenship and the Lady Falcons, 2020 would be the first NFL title since 1988. The thought of a title against a league foe would be a top-notch accomplishment.

“That would be great. It’s the team everyone wants to beat. They’re always up there and everybody wants to beat them. It’s going to be two great teams out there. They’re going to battle and whatever happens, happens,” Blankenship said.

Additionally, he said a victory would be a great way to head out for his seven seniors.

It wouldn’t be a 2020 story if COVID wasn’t mentioned, though. Bowman said, for the title game, the Lady Vikings will be short-handed, as five girls will miss the game due to quarantine precautions.

"Like most teams, we have our own challenges with rosters due to complications with COVID. It might be difficult, but still, we want the NFL back and make people realize it was just a one-time thing. … It just means those remaining girls on the roster just have to work harder and do it for their teammates," Bowman said.