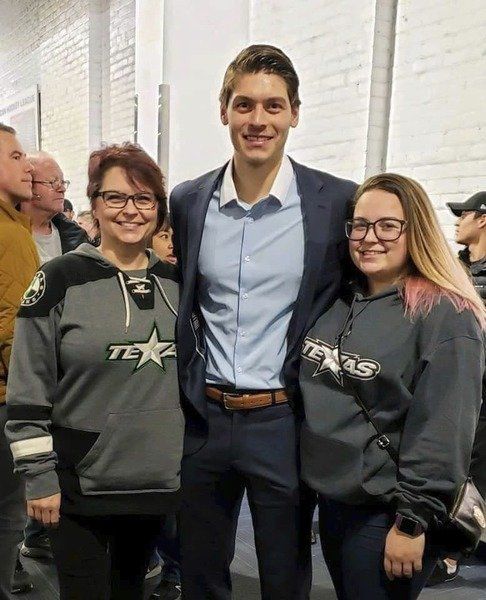 Contributed PhotoTexas Stars defenseman Joe Cecconi, a Youngstown native, is pictured along with his mother, Regina (left), and sister, Carissa, after an AHL game against the host Toronto Marlies this season. 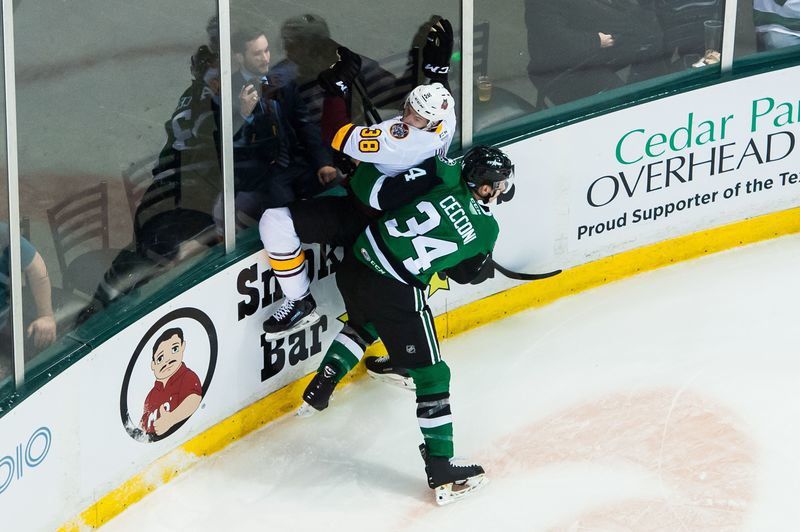 Mollie Kendall/Texas StarsYoungstown native Joe Cecconi drills an opponent into the boards during an AHL game this season with the Texas Stars in Austin.

Contributed PhotoTexas Stars defenseman Joe Cecconi, a Youngstown native, is pictured along with his mother, Regina (left), and sister, Carissa, after an AHL game against the host Toronto Marlies this season.

Mollie Kendall/Texas StarsYoungstown native Joe Cecconi drills an opponent into the boards during an AHL game this season with the Texas Stars in Austin.

Joe Cecconi has no idea how long he could be waiting out the COVID-19 pandemic in Youngstown, so following his three-day drive home from Texas last month, he ordered some gym equipment.

In his father’s garage, Cecconi, a rookie defenseman with the American Hockey League’s Texas Stars, has created his own little gym he works out in every day.

“I spent some money and bought a decent amount of gym equipment so I could keep myself in shape just in case the season starts back up soon,” Cecconi said Tuesday.

Cecconi, 22, is trying to remain optimistic. Like the NHL, the AHL, which also suspended its season March 12, hasn’t canceled any games yet.

While it seems less likely with each passing day, the season could eventually resume. Cecconi is treating his workouts like he will be playing games again soon.

“Right now, my mindset is I still need to get better,” said Cecconi, who played four seasons at Michigan and captained the Wolverines as a senior. “We might be playing, and I plan on us playing, I plan on myself playing. So I need to be ready for whenever the AHL gives the go ahead.”

Texas, the Dallas Stars’ affiliate in Austin, was in Colorado on March 11 when the NBA quickly suspended its campaign after Utah Jazz center Rudy Gobert tested positive for coronavirus. After splitting a back-to-back set with the Eagles, the Stars returned to Austin instead of flying to Tuscon for two weekend games.

“We were told to just sit tight for a few days,” said Cecconi, has compiled zero goals, five assists and a minus-21 rating in 54 games.

The AHL informed its players a few days later they could go home. So Cecconi packed up his belongings in late March, rented a U-Haul and drove 1,600 miles with a friend to Youngstown.

The Stars prospect left Austin with Texas just one point out of a playoff spot in the Central Division.

“We thought we could get into the playoffs,” Cecconi said of the disappointment that accompanied the suspension of the season.

Cecconi knows the group of players he grew close to over six months will likely never play together again.

“So it was pretty sad for that,” said Cecconi, a fifth-round pick by Dallas in 2015. “We never got to have like an end-of-year gathering to say goodbye and stuff.”

Cecconi’s rookie season has been difficult at times. The shoulder surgery he underwent almost a year ago stymied his offseason training. He only worked out regularly about a month before beginning his first NHL training camp. In Dallas, he wore a red non-contact jersey and couldn’t participate in some drills.

“It was very challenging for me to get the amount of summer training that I needed,” he said. “I didn’t get as much as I wanted to, so the season was tough.”

Still, Cecconi said he felt ready for the season.

“I thought I felt good, and then as 20 games goes by I started feeling like that surgery, maybe not having that big of an offseason is starting to affect me,” he said. “I did feel like I started to go a little behind and the expectations for myself were not being met, based on, I guess, you could say statistics and just personal growth.

“I wanted to be better, I wanted to have more of a progressive approach.

That’s why the 6-foot-2, 210-pound Cecconi said he’s trying to utilize the extra time he has right now to regain his old form.

“The surgery, it needed to happen, and now I understand why when people have surgery, the next year, it’s tough,” he said.

Cecconi also understands what an in-season coaching change can do to a team. When Dallas fired Jim Montgomery on Dec. 10, Texas coach Derek Laxdal was promoted to be an NHL assistant. Texas assistant Neil Graham replaced Laxdal.

“It was tough on the team,” Cecconi said. “I mean, Neil Graham came in and did a terrific job, and we already had a good relationship because he was the D coach.”

Despite enduring some adversity and struggling a bit as a rookie, Cecconi feels he has grown this season. He enjoys the pro hockey life. He loves Austin — “You wake up every day, it’s nice and sunny,” he said — and what it offers.

“I’ll say it was challenging, but there was a lot of good throughout the season,” he said. “I learned a ton, whether it was taking care of my body, how to set a schedule when you get back from practice, finding things to do throughout the city.”

William C. Fearn, age 88, passed away peacefully in Bradenton, FL, on April 29, 2020, and his daughters were with him. He proudly served his country in the Navy from 1950-1954. Bill worked for Niagara Mohawk as a lineman for 37 years and had perfect attendance. He was an active member of the…