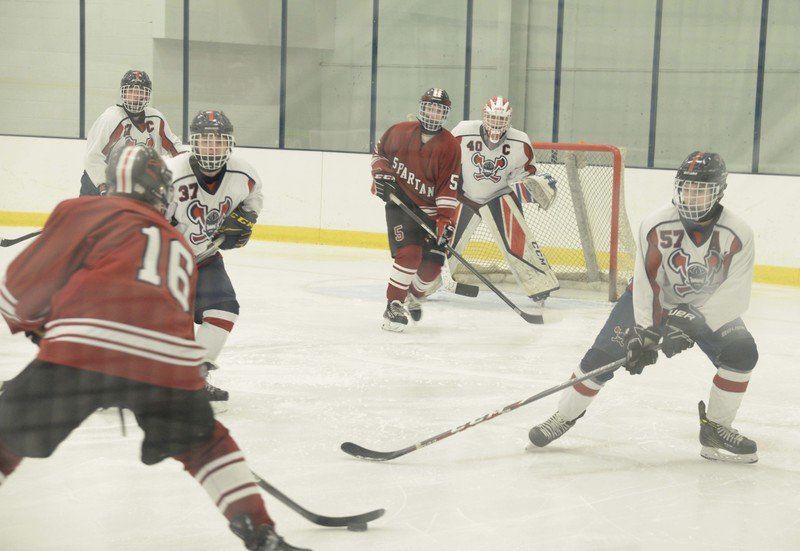 JOHN D'ONOFRIO/STAFFStarpoint's Blake Dewey (16) looks to make a play with the puck from the point during Friday's Federation hockey game against North Tonawanda at the Cornerstone Arena. Defending are NT's Sean Graves (37) and Jackson Chelbowy (57). 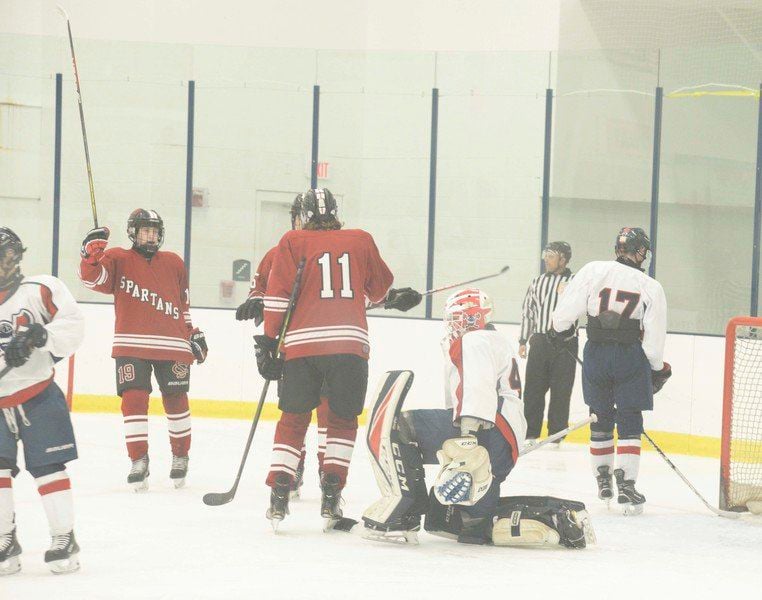 JOHN D'ONOFRIO/STAFFStarpoint's Blake Dewey (16) looks to make a play with the puck from the point during Friday's Federation hockey game against North Tonawanda at the Cornerstone Arena. Defending are NT's Sean Graves (37) and Jackson Chelbowy (57).

LOCKPORT — Most teams might find the transition from club to federation ice hockey a long, difficult one, but the Starpoint hockey Spartans have barely skipped a beat since making the move three years ago.

On Friday night, they flexed their newbie Small Schools Division muscles with a convincing 8-0 victory over the North Tonawanda Lumberjacks before a good-sized crowd at the Cornerstone Arena, despite the inclement weather.

Spartans winger Joe LoBrutto netted a three-goal hat trick and had an assist and fellow junior Max Ciepiela added four assists for veteran head coach Clayton Wilson's Spartans (15-1-1-1), who remain near the top of the standings along with Will South and Grand Island with the postseason nearing.

“Was the success of club a catalyst for us? Absolutely,” Wilson said. “My assistant and I have been together for 15 years we know what it takes to win and we get the kids to buy into it. This team bought in early. By mid-November they knew what we wanted, came together and they're playing well. Yes, we had great competition and success on the club level, but I enjoy this league. It's fun.”

Wilson said if the Spartans win their final two games next week, they'll finish second in their division.

“I don't think we can catch Will South. They beat us during the year, so they'd have the tiebreaker if we finish with the same points,” Wilson said. “If we win our last game next Wednesday (versus Ken East at Hockey Outlet) we'll finish second, ahead of Grand Island because we beat them last week and we have the tiebreaker head to head. We're hoping to finish off strong and take it into sectionals.”

LoBrutto entered the game as the Spartans' leading scorer in 2019-20. His hat trick gives him 19 goals on the season.

“All three were tap-ins. We were moving the puck well as a team — tick, tack toe passes,” LoBrutto said. “I didn't have to do much. I just sat on the back door and put them in.”

“I just kinda know where he is,” Ciepiela said. “I've been passing to him all the time. Tonight, he was just open, all in the right spots. I just kept feeding him right back door, tap-in goals.”

Starpoint senior Blake Dewey added two goals for the Spartans. He also likes his team's chances in the postseason.

“Just hard work. We have a great group this year,” Dewey said. “We just gotta focus one game at a time. Sectionals are coming up and we wanna go far.”

Senior Tyler Kolata, Ryan Kelly and Spencer Slote also found the net for Starpoint. Jude Lord and Robert Taylor had three assists each for the Spartans and A,J. White stopped seven shots to earn the shutout in goal.

“We play like a family and always move the puck — work down low, up top, neutral zone, defensive zone just looking to get the puck around to each and every person,” Kolata said. “I bet we can go pretty far. I think we can win it.”

Lumberjacks (3-12-1-1) head coach Alan Sbytek praised the efforts of his senior goalie Alex Wagner, one of the hardest working players in the entire league, facing an average of close to 45 shots per game. He stopped 20 of 28 shots on Friday night.

“Alex has been the heart and soul of our team and without him we wouldn't be in every game as we are,” Sbytek said.

“He just gives us an opportunity to compete and with a couple of lucky bounces and some goals maybe we can do something in the playoffs and surprise some teams. Goals have been hard to come by. We're a young team.”

Among the Jacks upcoming players of significance are sophomores Ryan McAvoy, Nathan Ziemba and Owen Becigneul.

The game was Starpoint's second at the Cornerstone Arena this season, having beaten Lew-Port, 4-2, on Jan. 3.