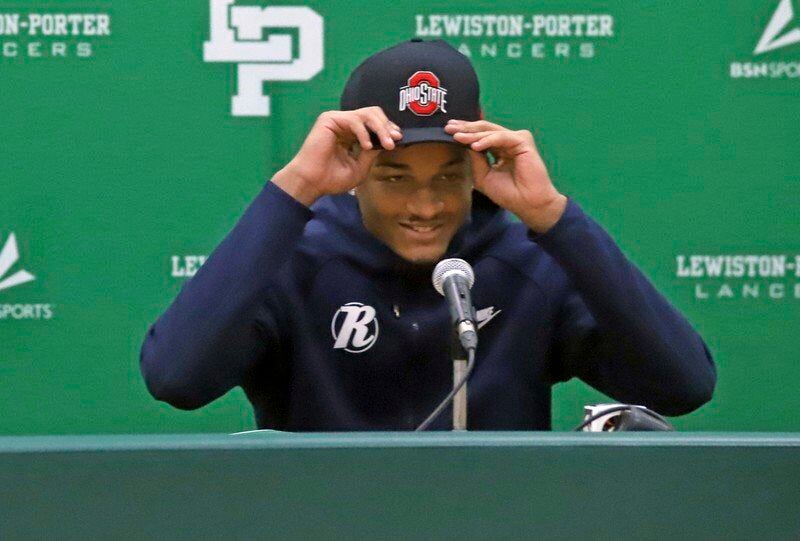 Lewiston-Porter basketball standout Roddy Gayle announced his college commitment by donning a cap from the Ohio State University on Friday at Lewiston-Porter High School. Gayle will join the Buckeys for the 2022-23 season. 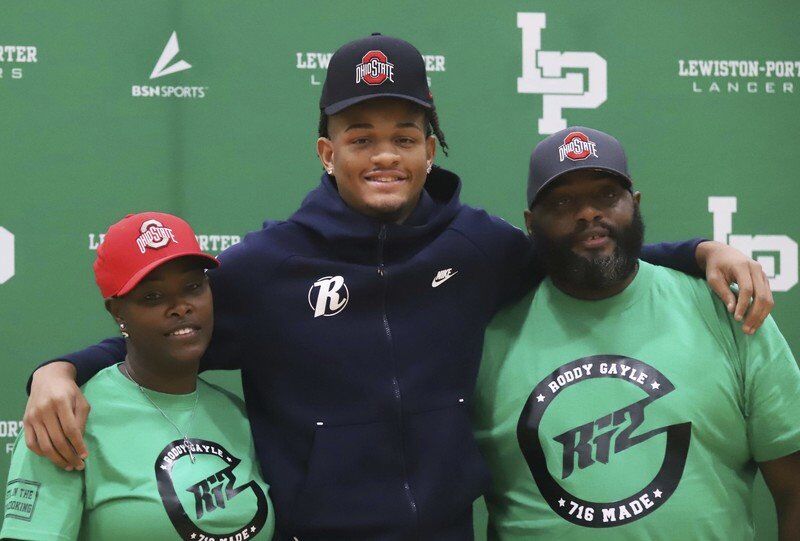 The Gayle family poses after Roddy Gayle commits to play for the Ohio State University on Friday at Lewiston-Porter High School. From left are Latoya Gayle, Roddy Jr. and Rodriquez Gayle Sr.

Lewiston-Porter basketball standout Roddy Gayle announced his college commitment by donning a cap from the Ohio State University on Friday at Lewiston-Porter High School. Gayle will join the Buckeys for the 2022-23 season.

The Gayle family poses after Roddy Gayle commits to play for the Ohio State University on Friday at Lewiston-Porter High School. From left are Latoya Gayle, Roddy Jr. and Rodriquez Gayle Sr.

LEWISTON — This wasn't just a moment Roddy Gayle Jr. thought about recently. It's been a lifelong goal.

"I've seen this in my dreams. It's crazy," Gayle said.

This press conference began with Lew-Port brass sharing thoughts on Gayle, who has starred for the Lancers over the last two seasons after playing for Niagara Falls during his eighth-grade year in 2017-18. Athletic director Brad Halgash, superintendent Paul Casseri and boys basketball coach Matt Bradshaw all of which chimed in to discuss the impact the four-star recruit has had on the Lew-Port community.

"He epitomizes what it means to be a student-athlete," Casseri said.

Bradshaw mentioned how thankful he was of Gayle's parents, Rodriguez Sr. and Latoya, for giving him the chance to work with their son. Calling the Gayles his "adopted family," Bradshaw has taken the onus of helping Roddy Jr. reach his dreams of making it to the Division I level at a major basketball program.

But as the coach has always opined, it's bigger than basketball when it comes to the junior guard.

"As good of a basketball player as he is, he's a better young man," Bradshaw said.

Bradshaw put things into perspective by adding that Lew-Port hoops hasn't seen a move this big since Jim Johnstone committed to Wake Forest in 1978. The irony of it is Johnstone was the driving force for the 1978 Section VI Class A championship team, the program's last sectional boys basketball title prior to Gayle guiding the Lancers to the Niagara Frontier League and Class A championships as a freshman.

"You don't win without good players, that's the message there," Bradshaw said. "But this is a big deal, Roddy deserves this. Roddy's just a special kid."

Gayle noted how relieving it is to have this decision behind him, especially with the uncertainty around the upcoming high school season after Gov. Andrew Cuomo announced Monday that high-risk winter sports — basketball, wrestling, ice hockey and cheerleading — were not permitted to begin on Nov. 30 due to the ongoing COVID-19 pandemic.

But Friday was much more about the moment itself. The fact that this decision came on the three-year anniversary of Gayle's grandmother, Shirley Ann, passing away. The range of emotions in the air were high, so it was only right that a dark day in the Gayles' past be brightened by what's to come in the future.

What stood out about OSU was the relationship Gayle developed with its coaches, as head coach Chris Holtmann and his staff reached out to him on at least a weekly basis.

Following in the footsteps of big, playmaking guards like former Buckeye greats D'Angelo Russell and Evan Turner, the 6-foot-5 swingman looks forward to rotating between the one, two and three guard spots in Columbus. Ohio State — ranked No. 23 in the preseason AP Poll — is a part of a strong basketball conference in the Big Ten, as six other schools in the league are ranked in the AP's Top 25.

Showing off his prowess on national stages with the NY Renaissance AAU club, on the Nike Elite Youth Basketball League circuit and even at a recent SLAM magazine event, Gayle wants the type of pressure that playing at a high-level program brings along.

"It's just gonna be great because every night you're gonna play against some talent and it's gonna be tough," said Gayle, who's averaged 23.9 points, nine rebounds, 3.4 assists and 2.4 steals per game for L-P. "I love tough, gritty games, so every game's gonna be action-packed. You know, I can't wait."

Gayle thanked so many throughout the L-P community, but one other name he noted was his fallen cousin, Eric Davis, who coached Gayle as a kid and put him on to the game. He was able to reflect on what he'd say if Davis were still here today.

"I would just thank him. Without him, none of this would be even remotely close," Gayle said of Davis, who passed away in 2018. "Like, I never thought today I would be sitting in this chair committing to a university. And I just wanted to thank him because he made this all possible. So I thank him for looking down on me and watching over me all the years."

Bradshaw also noted how this was not only a Lew-Port event, as he made sure to commend the former and current Niagara Falls coaches Sal Constantino and Brent Gadacz for their places in Gayle's journey.

As tough as COVID has been on all of us, Bradshaw said that the pandemic may have benefitted someone like Gayle. Being able to play in an AAU program that films practices and tournaments for colleges, as well as being able to bulk up 25 pounds in the weight room, the two-time NFL player of the year has been cleared of outside noise and has been able to focus on basketball.

Now the question is, how many times will we get to see Gayle throw down thunderous jams this season?

"Eventually we've gotta get back on the floor. We're doing our best, I don't know what's gonna happen," Bradshaw said. "But as our superintendent said ... if there's any chance we can have it, we're having it. You never know if it comes down to individual school districts, and they don't want it, we're gonna have it still. So no matter who we have to play, if we have to schedule all non-league games, that's what we're doing."