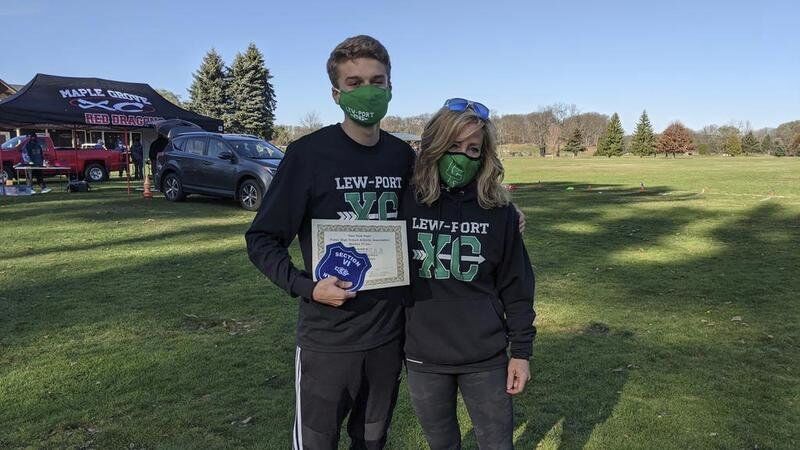 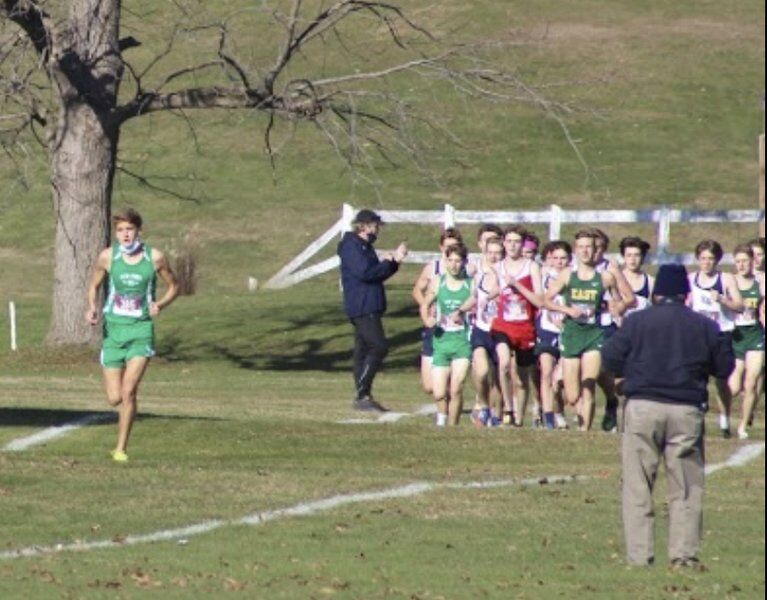 Lewiston-Porter's Justin Pavan (left) jumps out to an early lead on his way to the Section VI Class B-2 championship during sectional cross country championships Saturday at Bemus Point Golf Club.

Lewiston-Porter's Justin Pavan (left) jumps out to an early lead on his way to the Section VI Class B-2 championship during sectional cross country championships Saturday at Bemus Point Golf Club.

The Lewiston-Porter senior followed his Niagara Frontier League individual championship by running away with the Section VI Class B-2 boys race Saturday at Bemus Point Golf Club, his first-place time of 16:35.19 nearly 14 seconds ahead of the next finisher.

Lew-Port head coach Ann Marie Oliverio was so pleased to work with someone as driven as Pavan, who she said ran 50 to 60 miles each week and read three books on running once the COVID-19 lockdown hit.

Described as a role model, polite and kind with the his team, Oliverio said Pavan was a "great inspiration" to many of the coaches and athletes in Lew-Port's program this fall. In just her first season as a cross country coach, working with Pavan often felt like having another coach on the roster.

"He always gave his 100% best effort for everything," Oliverio said. " ... I learned a lot from watching him as well. This was probably one of the greatest decisions I ever made in life is becoming a coach. And I really was just blown away by everyone on the team, but then to have that extra special help and somebody who sets the inspiration and the bar high for everybody else, it was really, really an experience."

Oliverio may have been in her first season as head coach, but she was able to enlist in some great help. Her nephew, Andrew Perreault — a former NFL and Section VI champion, NYSPHSAA rep and L-P's school record holder in several running events — now runs for Canisius College, so she didn't have to go too far for input.

In a rapid season due to its shortened nature, as well as prepping for the rigors of a Tuesday-Thursday meet schedule, Perreault helped his aunt put together a regiment that helped the Lancers all season.

This moment was nearly taken away before it began, though, with Lew-Port going to an all-remote schedule the week leading into sectionals. But once her kids were available for the meet, Oliverio couldn't be happier to see how the team was able to support Pavan in his pursuit of Lancer greats like Perreault.

"When (Pavan) won, I said to all of them, 'Behind every winner is a team that's full of compassion and support for everyone,'" Oliverio said. "So you can't have a winner without that."

Pavan said this weekend was special because his goal of winning sectionals dates back to his freshman cross country season.

He got off to a fast start, jumping well out in front of the pack before being hit hard by Bemus Point's hills during the second mile of the race.

He shook that off to secure the win and finish his L-P cross country career on a high note, just like he shook off all the challenges COVID threw his way dating back to the 2019-20 school year.

"It was definitely difficult kind of losing (the end of spring) track season," Pavan said. "I mean, before we knew it was gone, I was still out there running every day, kind of in the cold, just still training hoping for it. But once we lost that, it was kind of hard to keep going, but I've always just been hopeful that we were gonna have something and luckily we did this year. So that's what really was driving me."

Outside of Pavan, L-P's top boys runners all placed between 13th and 35th (Josh Wisto, 13th; Kaden Johnson, 27th; Liam Farnham, 31st; and Leo Clark, 35th). The Lancers placed fourth as a team in Class B-2 with 104 points, behind East Aurora, Iroquois and West Seneca East.

Lew-Port girls XC placed fifth as a team with 104 points as well.