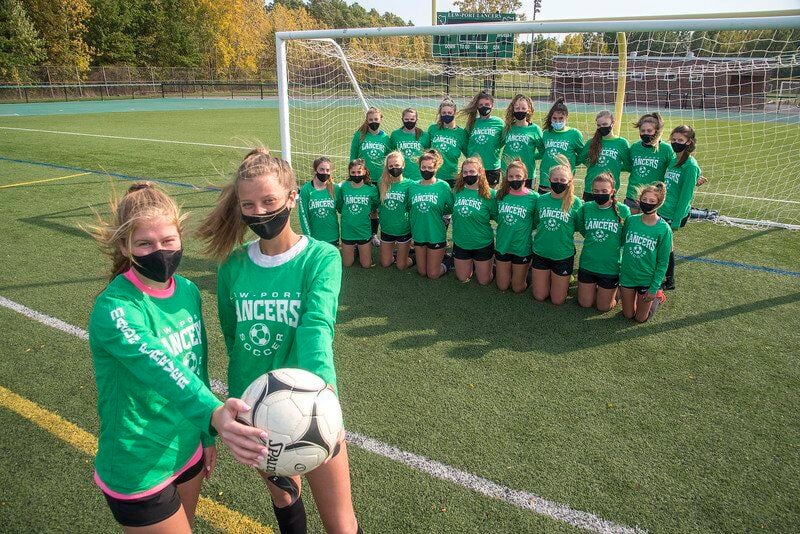 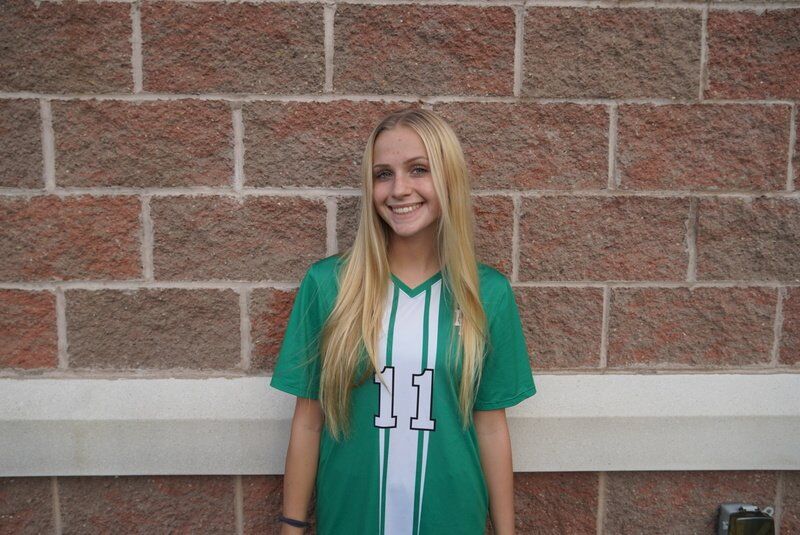 Lewiston-Porter's Logan Monteleone poses for team pictures Monday at Lewiston-Porter High School. Logan will wear No. 11 this season to honor her brother, Mason, who passed away this summer.

Lewiston-Porter's Logan Monteleone poses for team pictures Monday at Lewiston-Porter High School. Logan will wear No. 11 this season to honor her brother, Mason, who passed away this summer.

LEWISTON — For Lewiston-Porter girls soccer, it's about being a family when it matters most.

Sophomore Logan Monteleone had a strong outing in the Lady Lancers' 10-0 win over Kenmore East this past Saturday. She notched her first assist and netted her first career varsity goal, all in her first game at this level.

Monteleone looked strong in the win, but her feelings inside were anything but. In August, her older brother, Mason, tragically passed away in a car accident in Florida. Mason, 21, was a pre-med student at Florida State University and was also very active in the athletics community.

"I do everything for Mason now and I'm just happy that (the team) can help me through that," Logan said.

A former Lancer himself, Mason graduated from Canisius High School in 2018 and was a member of the Crusaders' 2016 state Catholic High School Athletic Association championship team. Growing up, he was also involved in rugby, soccer and wrestling, competing in the last two at the high school level.

One of Lew-Port head coach Norm Forney's sons played with Mason in the Niagara Pioneer League as a child, so he's known the Monteleone family for nearly 15 years. It's never easy aiding someone you care for in a time of loss, but this "gut punch" was different for Forney because of his own personal connection.

Forney knew a time like this was when Logan and the Monteleone family needed his team most.

"We've known these kids, coaches and players, we've known each other for years," Forney said. "... I've watched all these kids from the time they were little kids playing for modified up through varsity. So I've known them and I've seen them and you can't help but be a community member and care for these kids."

It was a touching moment for Forney when his two team captains, junior midfielder Sarah Woods and senior defensive middie Gracie Auer, came to him and said they wanted to do something special for Logan.

What they decided to do was dedicate the season to Logan and Mason, starting with a surprise pre-game ceremony. In his memory, they all got team warm-up shirts that bestowed the No. 11 — the number Mason wore during his time at Lew-Port — on the back.

Woods took things even further, exchanging No. 11 after wearing it the last two seasons for No. 1. The No. 11 will fittingly be Logan's for the rest of the season.

Forney backed the moves and made sure the pre-game dedication was a surprise for Logan as they prepped to play Ken East.

"Anything we can do to support the people we care about in the community I think is important," Forney said. "Especially during this time of COVID, but with a tragedy like that in particular."

Woods knows it can be tough making the transition from JV to varsity, let alone mixing that in with the loss of a sibling. That's why Woods made sure the team put its arms around Logan to let her know it'd be there for her no matter what.

Auer also spoke on the matter and how their gesture has hit home.

"It's awful when you lose someone and so by all of us having these shirts, it really shows how much we care about her," Auer said. "And it makes her feel appreciated and loved."

Woods noted that she feels as though no one could handle the situation the way Logan has. She called Logan "so strong" for pushing through each day and she sees her carrying on her brother's spirit, bringing his energy to the field.

There will always be a thought of Mason as Logan takes the field. With her teammates' gesture, though, she knows she's not going through this pain alone.

"(Saturday) was really emotional," Logan said. "I didn't really know that was happening so it definitely made me cry a lot and going in the game right after was kind of hard, too."

In one of the biggest Niagara Frontier League games early on this season, the Lady Lancers (1-0, 1-0 NFL) host Grand Island (2-0, 2-0 NFL) at 6:45 tonight. Getting a win over the defending Section VI Class A-2 champions would obviously be a huge boon to L-P.

Logan would love to make that happen for the Lady Lancers. Especially if it's a way to honor her fallen brother.

"I think he would be proud if I could do that. And I want to do that for him," Logan said.