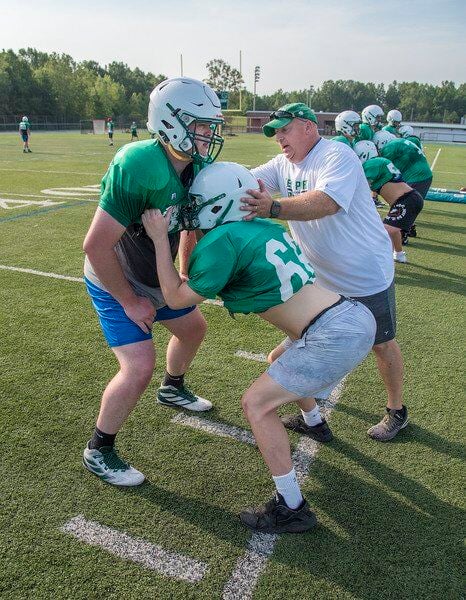 Coming off a 1-3 spring season, the Lancers are gunning for a winning season for the third time in 17 years, but the biggest challenge continues to be participation. In the last decade, Lew-Port’s enrollment has declined by more than 250 students, which along with other athletic opportunities, has taken a toll on football numbers.

Lew-Port enters the 2021 season with 29 varsity players and the goal for co-head coaches Dick Lindamer and Tim Shippy is to continue to grow participation. They want to provide a strong experience through team building and offseason workouts, and of course, recording a few wins along the way.

“If we had the luxury of putting together an easier schedule to get some wins and build some confidence, that definitely is one way to get a program back on track, but that’s not an option,” said Lindamer, who came back to the football program last season. “We have to do it through hard work, not just from the coaching staff but from the kids. We have to sell the program and make sure they have a worthwhile experience. But at the same time, we don’t want to compromise the discipline it takes to run a good football program.”

Despite being lone full-fledged member of the Niagara Frontier League in Class B, the schedule has not been any easier for the Lancers and the trend is expected to continue this season with dates against Cheektowaga and WNY Maritime, along with non-league contests against Williamsville South and Wilson.

Still, the Lancers feel they can be competitive every week. That success will hinge upon a young offensive and defensive line, as well as availability. Last season, Lew-Port lost three linemen and three linebackers in the same game, a crushing blow for a team lacking bodies.

“Week in and week out, we feel like we can compete,” Lindamer said. “There are some very good football teams that we are going to play and our lack of depth hurts us, but our best 11 players against another team’s best 11 players can be competitive. We just have to avoid injuries because we don’t have a ton of depth.”

The Lancers are replacing the graduation of leading rusher Frank Previte with 6-foot, 200-pound running back James Marshall and Tom Pozak, both of whom will also start at linebacker on defense.

Yet the coaching staff believes much of its success will be determined by quarterback Trent Reid. The senior went 16 of 36 for 190 yards and one touchdown last season, but his grasp on the offense and the game makes him invaluable to the team.

“Trent’s one of the most cerebral quarterbacks I’ve been around in a long time,” said Shippy, who will take over the program with assistant Derek Tracy following this season. “I’ve been here for six years and Trent has a better grasp of the offense and what’s going on around him than a lot of the quarterbacks that have been here. He’s got a lot of athletic ability and the game will come to him more than it has in the past.”

Lew-Port opens the season by traveling to Wilson at 7 p.m. Sept. 3.