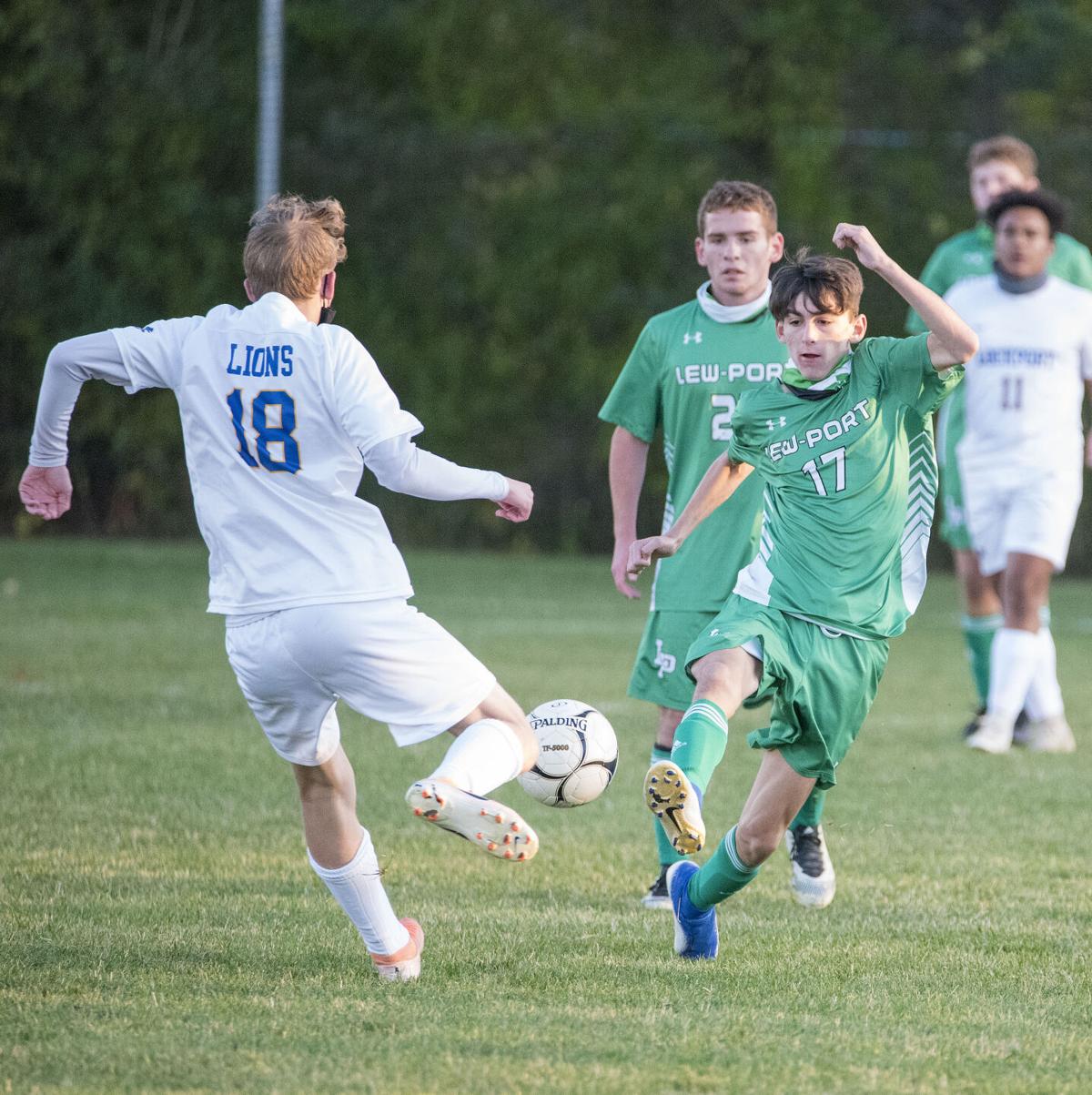 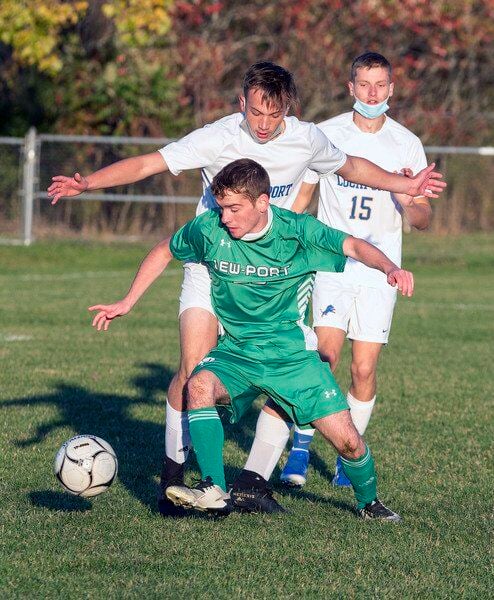 Lew-Port soccer player Robert Woods (23) moves the ball during game action Friday against Lockport at Lewiston-Porter High School. The Lancers handed the Lions their first loss of the season, 1-0. 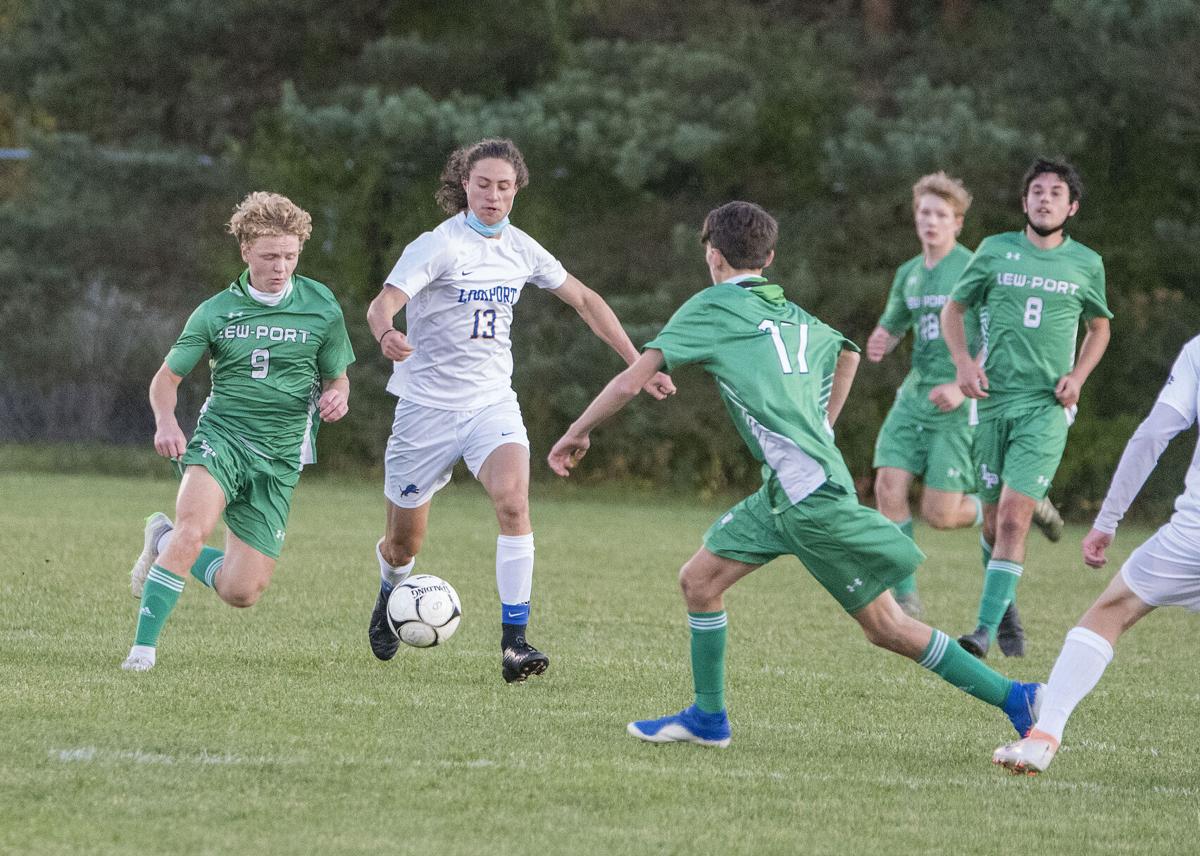 Lew-Port soccer player Robert Woods (23) moves the ball during game action Friday against Lockport at Lewiston-Porter High School. The Lancers handed the Lions their first loss of the season, 1-0.

Lewiston-Porter hung strong in a physical game with the Lions, eventually gutting out a tough 1-0 win Friday at Lewiston-Porter High School. With Niagara Frontier League teams beating up on each other this season, the Lancers (4-2 NFL) kept their goal of a return to the league championship game in sight.

"(The boys) obviously played well. You don't come away with that result against a team as good as what Lockport has year in and year out, and especially this year, without playing well," said Lancers head coach Rick Sweeney, whose son, Alastair, scored the game-winning goal off of an Eli Veltri assist. "I'm happy for our kids, they worked hard. We've been on the unlikely side of some results, we feel like, but that's the nature of the league we're in."

It hasn't been an easy path for the Lancers thus far, as they've already seen North Tonawanda (4-2 NFL) twice, Grand Island (5-1, 5-0 NFL) and now Lockport (4-1-1, 3-1 NFL). Sweeney said he was proud of his kids' resilience because they were able to "get off the mat" in a "measuring stick" game against the Lions after a 1-0 loss to NT on Wednesday.

Having already faced a tough road, Sweeney believes these top-tier matchups are making the Lancers more battle-tested. He hopes they can handle success and carry that over into today's non-league tilt with West Seneca West.

"Tough losses, like the one we had before, they deflate you, and it's very challenging to come back from it," Sweeney said.

"I think our kids battled and put themselves in a spot to get this one. Those tough games, I think they prepare you over the course of a season. Just about every game in our league has got a dog-fight element to it. Everybody competes, they're competitive kids, they all work hard, and even teams that might not have a great record, their record isn't a good indication of how hard and competitive they play you."

The younger Sweeney chimed in on his deciding play. After Jacob Niccola drove the ball up the pitch, the senior team captain dished a pass to Veltri in his center midfield spot. Veltri popped the ball up and made a lunging poke at the ball, which glanced off a defender and at Alastair Sweeney, who knocked it in.

With half the league season left to play, Alastair knows how crucial this victory was for league standings.

"It's very big because we know we're competing for standings. It's like us and GI are at the top of our division," said Alastair, as his Lancers are tied with NT for the No. 2 spot behind GI in the NFL's Frontier Division. "Beating an undefeated team, it helps a lot in term of standings. So that's really big ... just winning a game in terms of the whole season."

Coach Sweeney made sure to share his praises of Lockport head coach Jeff Hulshoff, noting how tough, physical and competitive the Lions are each and every year. Hulshoff thought his team looked strong and played well in what he said was an "even game," especially when it came to defending speedy Lew-Port forward Robert Woods.

What will burn Hulshoff more than the deflected game-winner are the hiccups his offense had. Missed opportunities were the theme of the night, as the Lions put eight shots on Lew-Port keeper Nathan Russell, who was perfect in earning his fourth shutout of the season.

Still, having come out on such a torrid pace, Hulshoff is far from worried about where Lockport will go from here.

"I think we're gonna be just fine. The thing is we've gotta get right back at it because we play Niagara Wheatfield (today)," said Hulshoff, whose Lions take on the Falcons in a battle of the top two teams in the Niagara Division. "We already played 'em once and we won 1-0 against them (on Oct. 5), and hopefully we can redo that, at least that score, hopefully. They're itching, so if we can win that one then we're one step closer to winning the division and then we might play Lew-Port again, or we might play Grand Island or NT.