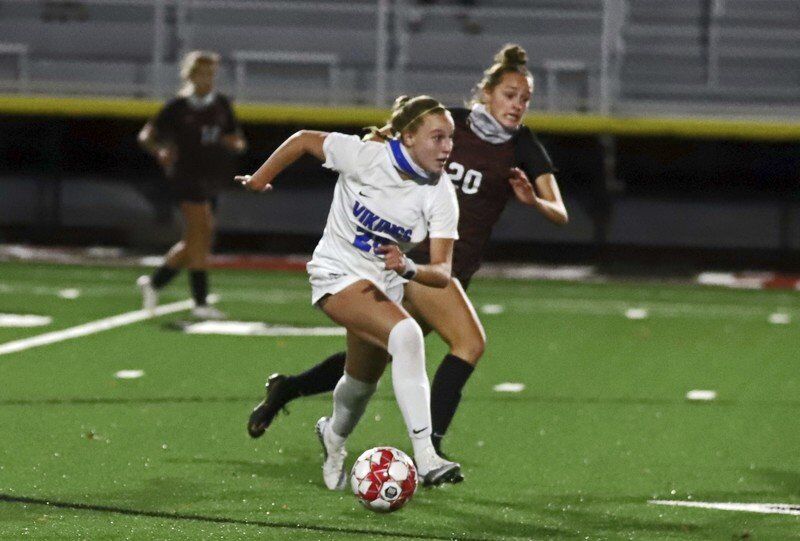 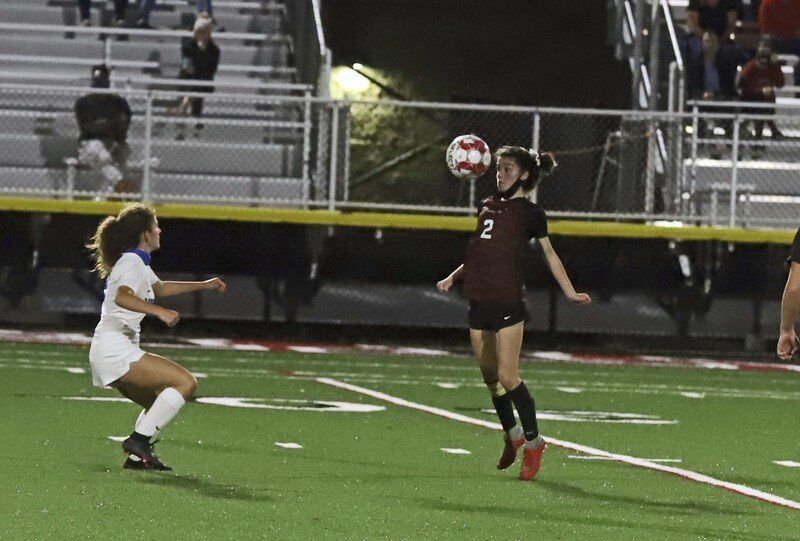 SANBORN — There's only room for one undefeated girls soccer team in the Niagara Frontier League.

Two of the NFL's top programs faced off Friday as Grand Island shut out Niagara Wheatfield, 3-0, at Niagara Wheatfield High School. The Lady Vikings (9-0-1 NFL) are still undefeated with two league games remaining, and they're now in the driver's seat to claim the NFL's Frontier Division.

Although this game was called at the 35:29 mark in the second half due to a lightning storm, that didn't stop junior forward Payton Khadra from leaving her mark. She began the scoring with a goal just eight minutes into play before she scored the final goal of the evening as 4:35 remained in the first half.

Super sophomore midfielder Ella Rudney would not be outdone, though, as she scored a thrilling fast-break shot over the head of NW keeper Tristan Davis. The 2019 first team All-Western New York selection rounded out the scoring, and senior keeper Rebecca Shultz recorded six saves in GI's fifth shutout of the year.

Rudney, Avery Mondoux and Victoria Thauer all added assists in the win as well.

"Coming into it, we knew it was gonna be a great match. We were looking for a back-and-forth battle," said GI head coach Dave Bowman. "They have great players and a solid coach (James Blankenship).

"The standings were showing that it was all coming down to tonight and I was just so proud about how the girls came out. They came out with fire, they came out (despite) the pressure and everything, and everything was clicking. And they just wanted it. They wanted it coming in and they just left it out on the field. So for the 45 minutes we were out there they were impressive to me and that's a lot. I've seen some good soccer out of 'em and they were impressive to me tonight."

NW (7-1 NFL) poses a tough matchup for any squad, as the Lady Falcons averaged 8.3 goals per game through their first seven outings. The key was slowing down one of WNY's best in Erin Weir, as the former second-team All-WNY pick has accounted for 12 goals and 15 assists this season.

Bowman knows the Lady Falcons' offense is dangerous as a whole, with Weir, Marisa Zarcone, Marisa Rickard, Gwen Jarosz , Gianna Rosati and Maddi Fike all netting five or more scores this fall. Bowman made sure to praise his defense and midfield for containing Weir and marking the rest of NW's unit around her to keep the sheet clean.

One name that was key in the defensive effort was senior defender Camille Burruano, as the co-captain could be heard at Smokin' Joe's with her calls and communication throughout the match.

With games against North Tonawanda, Clarence and Lockport remaining, Bowman knows how important this win is for GI's long-term goals.

"Well it was huge, especially because they were beating other teams big," said Bowman, alluding to NW's 58-2 scoring margin through seven games. " ... So it's making a statement that Grand Island is still Grand Island, you've still gotta go through us. So we had a good game plan to go at it and really try and make a statement. ... And when they come out and just play their game and play to their potential, things fall in line, and they did that tonight.

He added: "Now, like I said, going forward we've just gotta stay focused, one game at a time, and finish out the season. And likely we'll see these guys again in the (NFL) crossover game and get ready for the sectionals, whatever it might be."

Khadra may have been the star of the game, but she says she couldn't have done it without the rest of the Lady Vikings and two teammates in particular.

"I wouldn't have been able to score without Ella and Avery, obviously. They're my two players I combine with the whole time," Khadra said. "We just work together so well and I really couldn't have done it without those two. And the team as a whole, we played so well tonight. I mean the defense was on top of everything and it was just a solid team win."

Khadra believes the defensive pressure GI put on Wheatfield was integral to the effort, as the Lady Vikings keyed in on any balls that slipped through zones and Weir's over-the-top passes.

For NW, Blankenship thought his squad was flat in the first half and he said "we knew what we were getting into" against another undefeated team. He didn't feel like the group stepped up like it should before things were cut early due to the lightning.

After making some halftime adjustments, Blankenship saw the added opportunities it gave his team. He was looking forward to how a full half with those changes would have affected the game.

All in all, the Lady Falcons' head coach is far from distraught by the outcome. He knows how great NW still is and shared his message to the team as it moves forward.

"We take tonight's loss and we learn from it. We'll go into the next three (regular season) games we've got left and we'll make some changes," said Blankenship, whose NW squad is still atop of the NFL's Niagara Division.

"Subtle little changes in the back ... The girls are positive, they're on top of it. They weren't too overly upset about tonight's outcome, but they're focused, they're driven. We've just gotta keep that mentality all the way through the rest of the season and into playoffs, and into sectionals, so we should be fine."