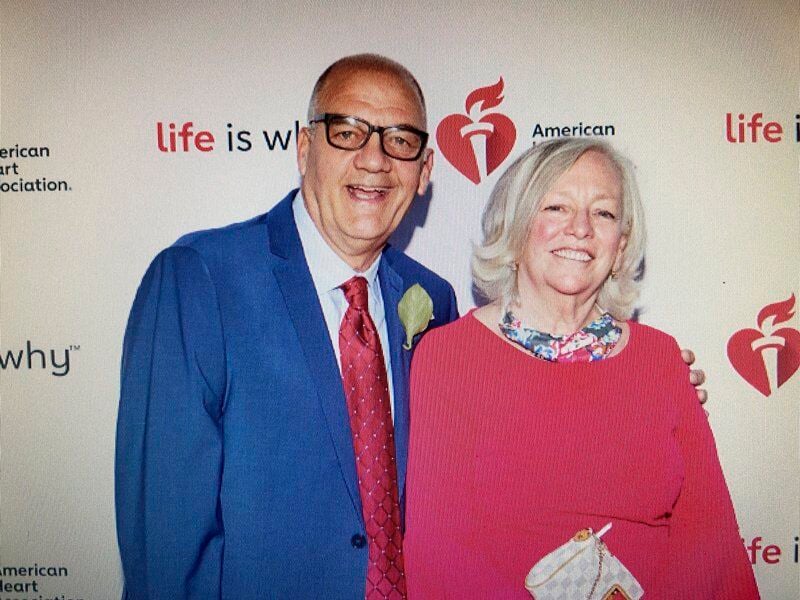 Contributed PhotoFormer Niagara men's basketball coach Joe Mihalich, left, and his wife Mary pose on the red carpet for an event where Joe was honored with an award for stroke survivors. 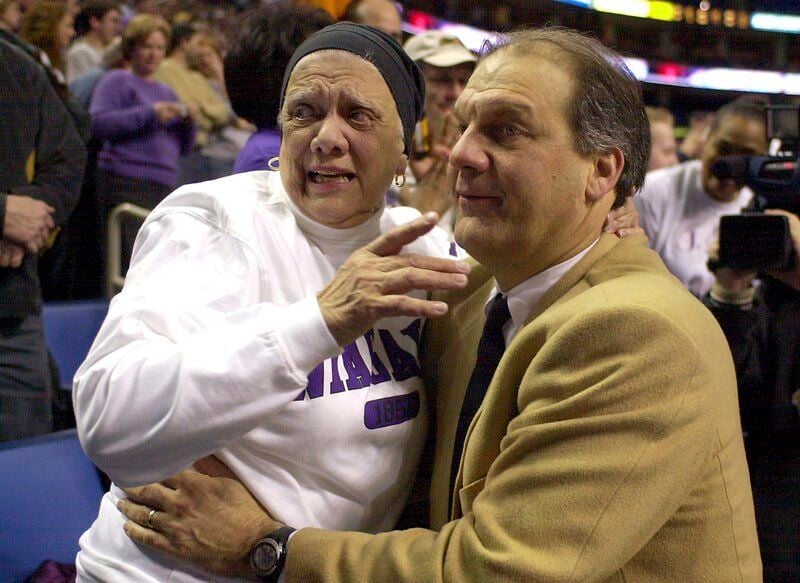 Contributed PhotoFormer Niagara men's basketball coach Joe Mihalich, left, and his wife Mary pose on the red carpet for an event where Joe was honored with an award for stroke survivors.

Joe Mihalich wants the folks in Niagara Falls — his true home — to know that he’s doing fine. Slowly but surely, he is making his way back from a brain hemorrhage he suffered 15 months ago at his home on the Hofstra University campus.

His mind is good, his spirit resilient and upbeat as ever. The winningest coach in Niagara basketball history has attacked his recovery the same way he did a Purple Eagles basketball season, taking every day as a blessing and a challenge, a chance to get a little better.

Mihalich is eagerly looking forward to next week’s celebration, when he will be inducted into the Niagara Athletics Hall of Fame. The four-day event will get under way on Thursday, Dec. 2, with a special dinner to honor Mihalich in the Salvatore Commons on the university campus.

“It’s amazing, it’s humbling. I can’t find the words to describe it,” Mihalich said in a phone interview last week, the first he’s given since his stroke.

“He’s been talking about this weekend since the news came in September,” said Colin Curtin, who has been working for Mihalich since his undergraduate days at Niagara and is now special assistant to the head basketball coach at Hofstra. “He can’t wait to get back up there.”

Mihalich said he has a lot of reasons to be thankful for this holiday. He has his family, his health, a new hoop season. He’s now a special advisor in the athletic department at Hofstra, and an avid supporter of Speedy Claxton, who replaced him as the school’s head coach.

His speech is still halting and slow because of his condition. We considered doing an interview through email or text. But Joe, who recently spoke to a crowd after receiving an award for stroke survivors, wanted to do it by phone. He hesitated at the word "thankful'.

“It’s emotional,” said his wife, Mary, who joined on the call to help translate. “Hold on a second.”

The Mihalichs were afraid they might lose him after he suffered his stroke on Aug. 15, 2020. Stroke is the fifth-leading cause of death among Americans. His son, Joe Jr., said his father suffered the worse type, a hemorrhagic stroke, in which the a blood vessel bursts or leaks and blood damages part of the brain.

Mary Mihalich was driving to the family’s shore home in Ocean City, New Jersey and speaking to Joe by phone when it happened. They were talking and, suddenly, the phone went silent. She called back and her husband could barely speak.

“I remember thinking that the phone wasn’t working,” Joe recalled.

Mary knew something was very wrong. She called Curtin and asked him to check on Joe at the house. She called Joe Jr., who was waiting at the house on the Jersey shore, and told him, ‘Something’s wrong with your dad. I’ve got to go back.’

Curtin, who went to Niagara as a freshman to work with Mihalich in 2005 and has been with him ever since, was home at the time, about 20 minutes from campus. He checked the Hofstra basketball office and Joe wasn’t there. Then he rushed to Mihalich’s house on campus.

“I got to the house and he was in the driveway, kind of walking,” Curtin said. “I yelled for him and he turned around. He was like his normal self. He knew who I was, threw a big fist in the air.

Soon, the Mihalichs were all heading to Long Island. Tony came from Virginia, where he’s a track and cross country coach at George Mason. Matt drove in from Connecticut, where he coaches hoops at Avon Old Farms Prep. Joe Jr., an assistant coach at Penn, came up from New Jersey.

This was at the height of the pandemic, remember, which made things even more hectic.

“It was a really scary couple of days,” Joe Jr. said. “Oh my god, we’re so lucky that he’s alive. That night he went into the hospital, we were thinking worst-case scenario. We had a prayer circle in the parking lot.”

“Colin got him to the hospital and he took a turn for the worse,” Mary said. “He had that surgery and then it’s been recovery ever since. A long recovery. Most people don’t survive that type of stroke.”

But most people aren’t Joe Mihalich. Mary remembers one of the doctors discussing the grim possibilities and her saying, “You don’t know Joe.” It was touch and go for awhile, however.

“He woke up Aug. 15 and the next thing he knew it was the end of September,” Mary said.

“I didn’t know what was going on,” Joe said.

But he quickly realized what lay in front of him — a long and difficult and sometimes frustrating recovery. His speech came back slowly, and while he’s sharp mentally, he still has trouble putting things into words. He says "Yeah" a lot, eager to express his understanding.

“He can walk and he can talk,” Mary said. “He can do everything and his mind is fine.”

“He looks as good as he ever looked,” Joe Jr. said. “He still walks every day. He’s moving well. If you saw him from across the street, you’d think it’s the best he ever looked. He’s slim and trim and looking good. He can walk, lift his arms. Everything is fine.

“His memory is sharp as ever. It’s just the speech is rusty. It’s still getting better. I talked to him yesterday after our game. I said ‘Dad, this is the best you’ve sounded so far.’ He just keeps getting better, and it’s been (15 months) now.”

Joe Jr. said his dad approached his rehabilitation the same way he did his coaching: With a dogged, relentless passion, a belief that anything is possible

“I can’t say enough about how inspirational he is, how touched we all are to watch him,” Joe Jr. said.

“It’s amazing how he handles everything with such class and grace,” Mary said, her voice breaking.

“It is the only thing I know how to do,” Joe said.

He had a great example in his mother, Dolores, who died in November of 2013 after a nine-year battle with cancer. Joe spoke of her often during those years, and felt her presence during his final season at Niagara, when he won his third MAAC coach of the year award.

Mihalich considered his mom the toughest, most resilient person he ever knew, and he felt her survivor’s spirit in him during his recovery.

There’s still much to do down here, a lot of basketball to watch, a family to cherish. Joe admits he misses coaching, the routine, the joy of preparing and competing and seeing players get better. And winning, of course.

Mihalich won 265 games at Niagara, the most in school history. In 2005, he took the Purple Eagles to their first NCAA Tournament in 35 years. They went again two years later. He left for Hofstra in 2013 and won 60% of his games. He got them back to the NCAAs in his seventh year, same as at Niagara.

Joe and Mary recently drove at least four hours to Virginia to see Penn play at George Mason. After the game, they drove four hours to Pittsburgh to watch Hofstra play Duquesne. They drove a couple of hours into Pennsylvania, spent the night, and drove back to Long Island the next morning.

“They were like Smokey and the Bandit,” Joe Jr. said. “They drove like 16 hours. It was crazy. He’s all right, man. He’s keeping himself in the basketball world. He’s keeping it rolling.

“He’s been an absolute soldier. If he was having a bad day, he never showed it. And my mom has been a soldier through the whole thing. She’s the real MVP, you know!”

Mihalich says he roots hard for Speedy Claxton at Hofstra. He doesn’t know if he’ll ever coach again. How can you rule it out, when it’s given you everything you have in life?

Curtin said he wouldn’t rule anything out. He said Mihalich texts him after Hofstra games to evaluate the team. “If anyone could get back on the bench, it’s that guy,” Curtin said.

“You never know,” Joe Jr. said. “I know it’s just what he does. Basketball is not a job for him or me. It’s a part of who we are and a part of our family. It’s more of a calling, more of a vocation than a job.”

No one ever did it better on Monteagle Ridge, where Mihalich built a perennial contender. He raised his three boys there and raised up a program. In his heart, he never left.

“That’s home,” said Curtin, like Mihalich a Philadelphia native who grew fond of Niagara. “We always say, if we spent the rest of our lives up there, we’d be fine.’ I love the area. I still do. Coach would still say he’s more of a Western New York guy than a Philadelphia guy.

“He threw himself into that community. He loved the people who lived up there and worked with him. And he could coach a little bit, which also helps.”

Next weekend, the Niagara people get a chance to tell Joe Mihalich they were the lucky ones, to embrace him once more, and to love him back.