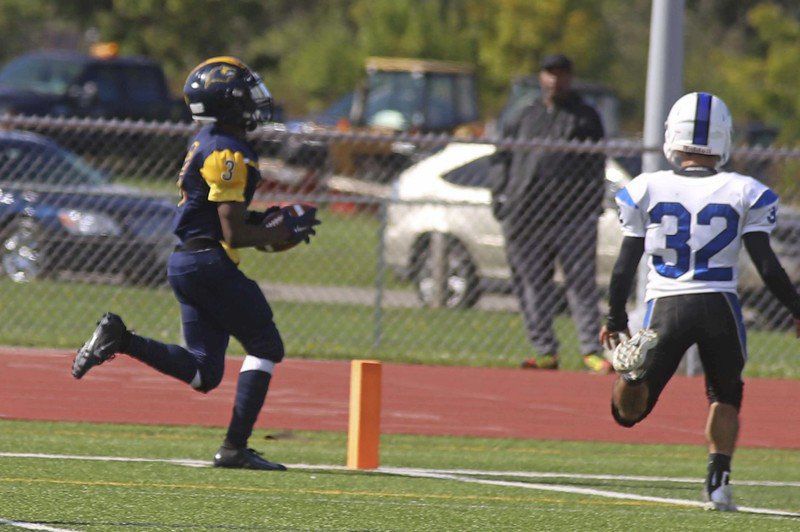 Paul Battson/contributorThe Wolverines' Zion Paige takes the ball into the end zone for one of his four touchdowns in Saturday's win over Frontier at Art Calandrelli Stadium. 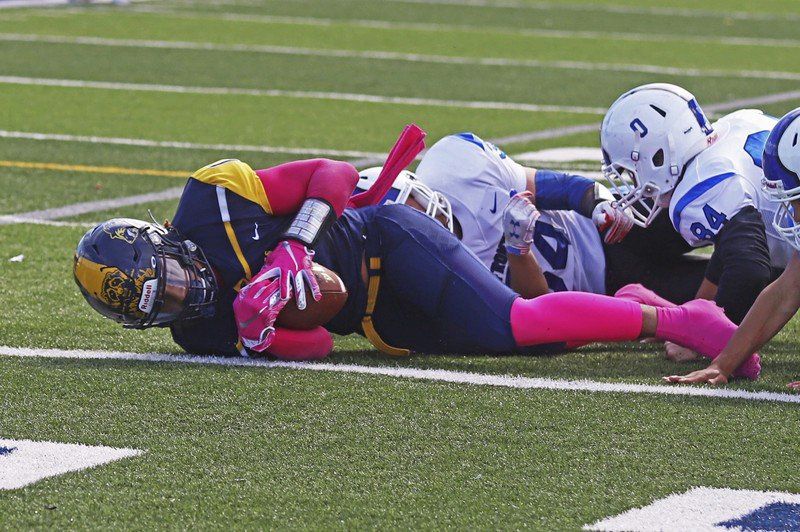 Paul Battson/contributorThe Wolverines' Zion Paige takes the ball into the end zone for one of his four touchdowns in Saturday's win over Frontier at Art Calandrelli Stadium.

NIAGARA FALLS — Niagara Falls is back and putting teams on notice.

The Wolverines are rolling after their 43-19 win over Class AA rival Frontier (1-4 AA) on Saturday. Battling back from a 19-8 hole, the Falls would go on to score the final 35 points of the game.

Down 7-0, lightning rod Zion Paige made the Falcons pay on a punt return TD. The Wolverines (4-1, 3-1) would make it 8-7 on Kalem "KK" Chapell's two-point conversion, but adversity struck from there.

Frontier would answer on a second TD run from Matt Ciszewski before NFHS attempted to do the same. But the Wolverines were held out of the end zone after Justin Humphrey-Goldsmith fumbled on a strip-sack play in the red zone late in the second quarter.

Frontier would take a 19-8 lead after recovering an onside kick and then forced a fumble on the Wolverines offense. From there though, JHG and Paige would turn up.

On one 4th-and-13 play and following up with a 4th-and-9, Humphrey-Goldsmith would find Paige and Faybion Prather on consecutive possessions. Once the Wolverines took that 22-19 lead, JHG would find his favorite target in No. 3 — Paige — once again to cap off a 20-point third quarter.

JHG was not done from there though — he would hit the end zone on a QB sneak early in the fourth, then he dialed up Paige one more time for their third TD strike of the afternoon. In total, JHG accounted for five touchdowns (4 passing, 1 rushing) while Paige accounted for four himself (3 receiving, 1 punt return).

Entering the day, Paige had accounted for 404 of JHG's 761 passing yards, which was approaching the NFHS single-season record. They took care of that milestone in just about the fourth quarter alone, continually showing how dangerous a tandem they are with their seven TD connections on the year.

"It's unbelievable. This is the best quarterback I've ever played with," Paige said as he was interviewed with his QB by his side. "He was kind of down in the first half. We got in the locker room, I told him, 'Tight or wrong, I've got your back. Throw it up, I'm gonna make you look good.' And he's been doing that."

Paige now has eight total TDs this season and Humphrey Goldsmith is up to 14 for the year, but none may compare to the dazzling back-of the-end zone catch the duo concocted on 4th-and-13. That may have been the most important play of the game and it sparked the comeback.

"I was really just trying to get a first down, but he was in the end zone," Humphrey-Goldsmith said. "So I just threw it up to him. I knew he was gonna make a play on it."

Head coach Don Bass was confident enough to leave his offense on the field to convert both of those fourth down plays due to the talent his team possess out wide.

"I think we have everything we need and I didn't think they could necessarily run with us on the pass," Bass said. "So if we could hold the line long enough somebody would get open. So it's just a matter of not if, but who (would make a play)."

Paige sure enjoyed JHG taking in his halftime advice and he wanted to help spark the offense while it was down. This offense will need the two playmakers to keep things rolling after this three-game winning streak. The unit is averaging 33 points in four victories.

"I feel like we're young and our potential is like through the roof," Paige said. "If we play like a team every game, I think we can play with anybody in Western New York, no matter who."

"(We're) a tough team," Humphrey-Goldsmith said. "If we play to our full potential, we'll be alright."

Bass echoed some of the same things about the game and he was pleased to see the team battle through the early struggles.

"Well I think we played like we're capable of playing," Bass said. "We always have trouble with that double wing, but I think we were thinking too much. You know how it is, that's assignment football. You can't think, we've gotta react. So we made a couple of adjustments at halftime, we kind of stopped playing cute with them and said 'Here we are, here we come, let's see what happens.' And I thought that our defensive coordinators did a great job of adjusting today."

Those adjustments were key, as the Falls 'D' got an El-shaddai Ashley interception and fumble recoveries from Vashaun Sanchez and Rajear Moore.

With two huge AA matchups in weeks six and seven against Jamestown and Bennett, Bass does not want his team to look ahead or be satisfied with Saturday's showing.

Visitation is 4 to 7 on Wednesday with a funeral service to follow at OTTO REDANZ FUNERAL HOME. Arrangements by Michael R. Goodlander. Share condolences and view full obituary at GOODLANDERCARES.com