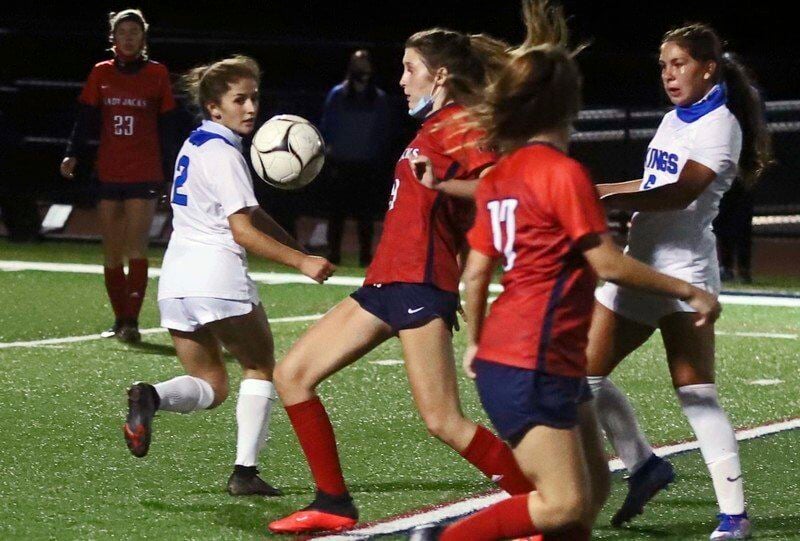 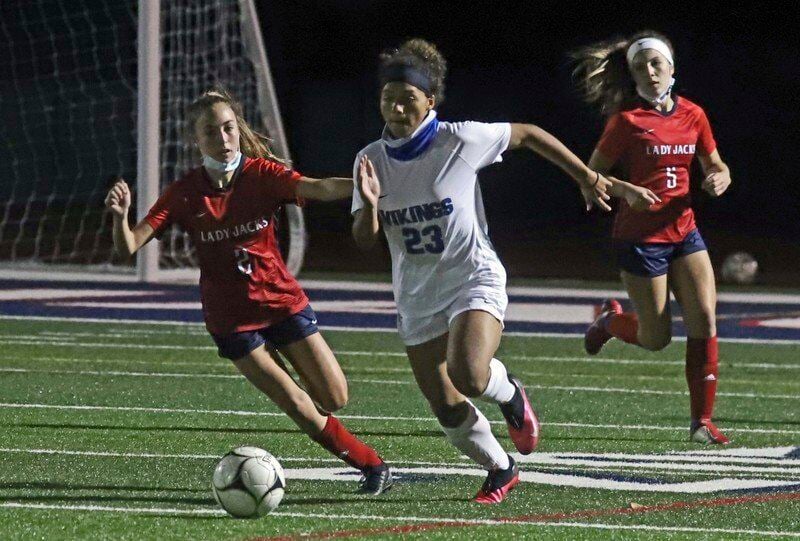 North Tonawanda's Arianna Bork and Grand Island's Jessica Whitfield fight for control in Monday's game at North Tonawanda High School. Whitfield scored in the second half to help the Lady Vikings take a 3-1 win and move to 2-0 on the season.

North Tonawanda's Arianna Bork and Grand Island's Jessica Whitfield fight for control in Monday's game at North Tonawanda High School. Whitfield scored in the second half to help the Lady Vikings take a 3-1 win and move to 2-0 on the season.

NORTH TONAWANDA — And just like that, Grand Island girls soccer is up to its old tricks.

The Lady Vikings dominated the action from the opening minute against North Tonawanda, taking down their Niagara Frontier League foes 3-0 Monday at North Tonawanda High School. GI (2-0 NFL) is now up to a 12-0 margin through 80 minutes of action, shutting out both of its 2020 opponents thus far.

The defending Class A-2 champions outpaced the Lady Jacks (0-1 NFL) all night, finishing with a 15-5 advantage in shots on goal. GI began its scoring in the first half on an Ella Rudney goal coming at the 13:15 mark.

The second half action was a bit more even for the Lady Jacks, but their efforts went to no avail as Avery Mondoux and Jessica Whitfield got on the board for GI. Rudney, a first team All-Western New York pick last season, got her first assist of the year on Mondoux's goal, while Emma Besl aided Whitfield on an amazing header play.

It was a tough start for the youthful Lady Jacks, but senior keeper Jessica Tyrrell was a bright spot on D as she finished with 12 saves. Her performance in net will be key moving forward, as the co-captain leads a roster that features six sophomores and two freshmen.

GI head coach Dave Bowman thought his team played well Monday, noting the ball movement and maintaining possessions as keys to the victory. He sees the trust building between the girls and he hopes they can continue to work together as a team with more time on the field.

Although he would like to see some improvement when it comes to finishing shots, Bowman has faith in what's been a robust offensive unit early on.

"We've got a lot of individual talent and they're starting to trust one another and starting to work off of each other and be patient," Bowman said. "I think the patience, the ball movement, and being there and available for each other to move the ball around, it's gonna lead to opportunities. You don't have to always necessarily drive for opportunity after opportunity, just move the ball, be patient with one another and they'll arrive."

Whitfield credited Besl on a beautiful cross pass, helping her score her second goal in as many games. She also made sure to note Bowman's play call for the heads-up goal, as she was assigned to line up right in front of Tyrrell.

Having lost a strong core of seniors, Whitfield has been delighted by how the team has stepped up at this point. It also doesn't hurt enacting some revenge on NT after the Lady Jacks knocked them off in last season's NFL title game.

That was a game Whitfield watched from the sidelines due to suffering a torn ACL early in the year. After a personally lost 2019 season — mixed in with the uncertainty caused by COVID — Whitfield is happy to be back playing the game she loves.

"It feels great. It was really hard sitting on the sideline watching everybody else play," Whitfield said. "But it feels really nice to be back on the field and playing with all my friends again, it's really good. Because I had to sit out for most of the season."

NT head coach Hannah Crouch admitted that GI is not a team most would want to open with, as she integrates a roster that graduated eight seniors — six of which were four-year varsity players. Even as uneven as the first half was, Crouch is confident because the young group seemed to settle in during the second half.

Even in having a deer-in-the-headlights moment early on, Crouch could see how beneficial it was for her girls to get this type of experience against one of Western New York's top programs.

"Six new starters, so it was definitely eye opening for them," Crouch said.

"They came to the game and you could tell they were nervous. ... So it was definitely a welcome to the big leagues kind of game for them. But I'm proud of how they responded and, like I said, as they went through the game you could just seem them getting more comfortable and just go out and play soccer and not be nervous or scared of Grand Island, so it was nice to see."

NT looks to get back on track at 4:45 p.m. Wednesday when it travels to CSAT. GI will get back to work the same night, with a 6:45 p.m. home date against Lewiston-Porter.