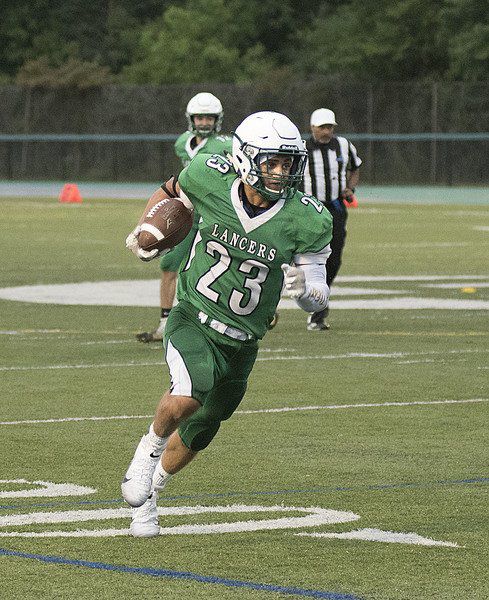 James Neiss/staff photographerLew-Port's Gino Fontanarosa runs with the ball during the Lancers' season-opening win over Medina on Friday. Fontanarosa scored three times in a 28-0 victory. 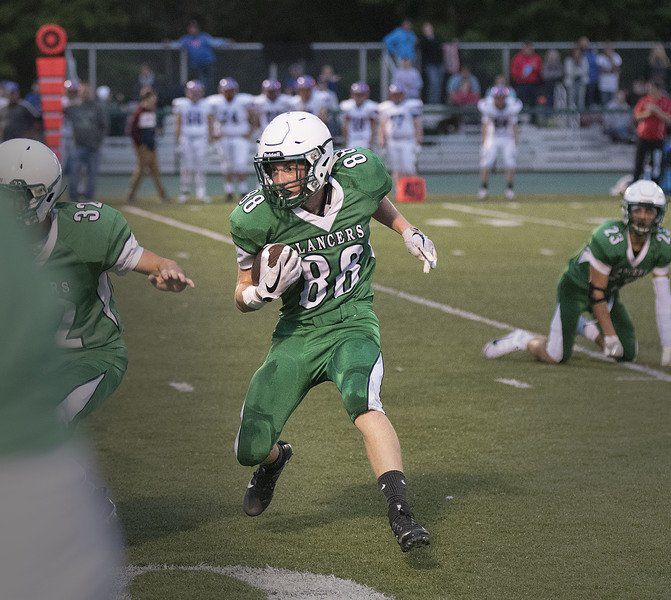 James Neiss/staff photographerLew-Port's John Wendt runs after coming down with an interception Friday night during the Lancers' home win over Medina.

James Neiss/staff photographerLew-Port's Gino Fontanarosa runs with the ball during the Lancers' season-opening win over Medina on Friday. Fontanarosa scored three times in a 28-0 victory.

James Neiss/staff photographerLew-Port's John Wendt runs after coming down with an interception Friday night during the Lancers' home win over Medina.

The senior tailback went bananas in Lewiston-Porter’s home opener Friday night against Medina, sparking the team to a 28-0 victory.

He would get the scoring going early on with a goal-line TD after setting the team up on a long gainer in a third-and-short situation.

Quarterback J.P. Stewart would then connect with Fontanarosa to punctuate the second quarter on a beautiful 56-yard screen play, sparked by a great pancake block from offensive lineman Jared Rebon.

Fontanrosa added a touchdown run later on in the game as well after leading the Lancers downfield with a 65-yard catch-and-run on a wheel route. To add to that all, he managed to lead the team in tackles with nine.

Head coach Matt Bradshaw was more than excited to see No. 23 breaking loose all night after Fontanarosa suffered through an injury-riddled 2018 season.

He mentioned how even with nursing his wrist injury, Fontanarosa still made sure to come and watch every Lancer practice last fall.

Under center, Stewart was able to shake off two first-half picks to cement the game at 28-0 with a 25-yard strike to Corey Stack in the fourth quarter.

The defense was also a crucial component to the win, shutting out the Mustangs and holding them to only 111 yards of total offense.

Bradshaw did not anticipate a shutout performance but he could not have been more pleased with the team’s showing.

Looking ahead to next week, the Lancers will travel over to Cheektowaga for a huge Class B-1 matchup. The Warriors may be the Lancers toughest test all year, with a program that has won Section VI championships in four of the last five seasons.

Bradshaw knows who the Lancers will be lining up against next Friday night. But he feels like outsiders may not realize just who Cheektowaga will be playing.

“Cheektowaga’s tough, you know. But I think we are too,” Bradshaw said. “All the reporters and the publications they can sleep on us all they want. We believe in ourselves. As long as we have 23 (Fontanarosa), 88 (Wendt), 79 (Rebon), Corey Stack No. 3 and No. 11 (Krawczyk) and some of the others ... as long as we have those guys, we’re gonna be okay.”