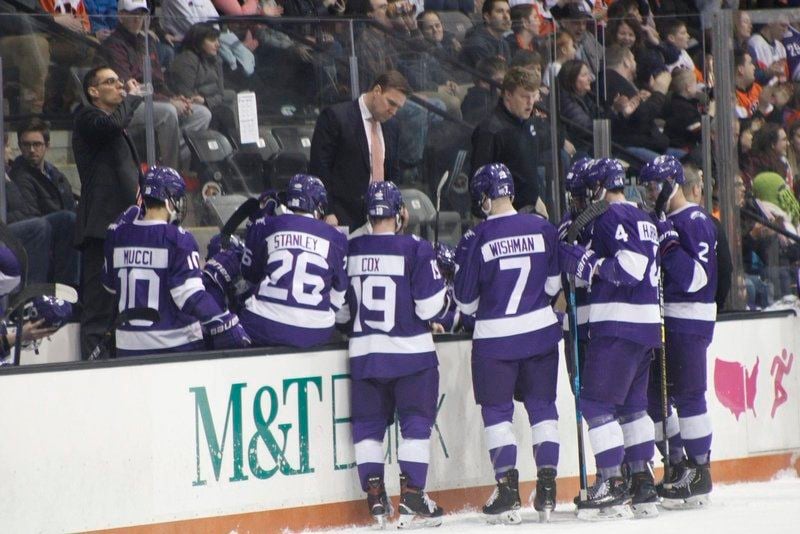 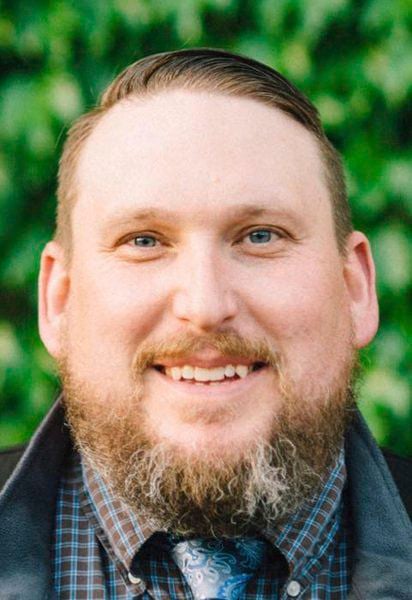 As the bus pulls away from Dwyer Arena on a recent Saturday afternoon, the chatter among the players slows and an air of serious intensity takes hold. It’s a little over an hour to RIT’s Gene Polisseni Center, just outside of Rochester, and Niagara is heading there for the second part of a home-and-home series against the Tigers.

The Purple Eagles won the first game the night before at Dwyer Arena, 4-1, and are looking for a sweep of the weekend. Of course, RIT has other plans, and the outcome will be decided later that evening. While winning the first game may have been fun, any sense of enjoyment with the win has been replaced by focus and a sense of eagerness to get back on the ice.

For the team’s trip to RIT on Feb. 22, the hockey program allowed a reporter from the GNN Sports to tag along and get a peek behind the scenes at what happens before, during and after a game.

After the hour-plus ride, on which head coach Jason Lammers reads a newspaper and tries to catch a quick nap, the bus pulls up to the Polisseni Center. The players quickly get off and help carry gear into the locker room area.

Talking increases, and a nervous energy takes hold as they settle into their pre-game rituals. Some listen to music and prepare their sticks, while others play “sewer ball,” a game played with a soccer ball. Some players also head out to the bench, where they sit and seem to play-out the upcoming game mentally.

While that goes on, Lammers engages in a routine of his own, working out in the hours leading up to game time.

In the meantime, Phil Rhodes, Niagara’s director of hockey operations, sets up a laptop and a walkie talkie in the coach’s box looking down on the ice. During the game, It’s Rhodes’ job to “clip” short videos of the game play for review between periods and after the game, to be available if Lammers wants another look at a play on ice in real-time.

Before the first period begins, associate head coach Matt Nicholson mentions that they expect RIT to start strong, especially after the loss the night before.

“We expect them to push in the first 10 minutes,” he says. “Hopefully, we can hold on, and maybe hit back.”

Games between the two teams have been both tight and rough, with both teams checking hard and playing with an edge. As Lammers says, “there’s a little more bite to these games than when we play other teams.”

The crowd is loud and boisterous as the teams come out for the start of the game, with the student section chanting “pur-ple pan-sies!,” among other things. It’s not quite a full house, but the game has a definite playoff-like atmosphere.

The puck drops for the first, and as Nicholson expected, RIT comes out strong, bringing the play to Niagara. The Purple Eagles push back, but RIT strikes first, taking a 1-0 lead into the first intermission.

During the intermission, Rhodes carries his laptop down to the locker room, where Lammers, Nicholson and assistant coach Andy Boschetto watch clips from the period and talk about adjustments they need to make.

Boschetto watches a clip of a Niagara forward pulling off of an RIT defenseman after an offensive-zone faceoff loss, and says he would like to see some of the players stick on the forecheck off of offensive-zone faceoff losses longer, as opposed to pulling back into a defensive posture. The coaches watch the RIT goal and look to see where the defensive breakdown occurs. On another play, a Niagara forward gives the puck away in the neutral zone, something Lammers had talked to the player about during the period.

“He didn’t want to ice the puck,” he says to the others, noting that he’d like to see the player put a softer touch on the puck in that situation, meaning he could clear it to safety while not taking the icing call. All of this happens in a flurry, as the coaches only have several minutes to digest what had just happened and talk to the team before heading back out onto the bench.

In the second period, Niagara scores two goals to go up 2-1. The game is getting chippy, and there are a lot of penalties being called. During the period, Lammers radios up to Rhodes, and asks if he should have the referees review a penalty they had just called. Rhodes quickly re-watches the play and determines there isn’t much to do about it.

“There’s nothing to review,” he responds back.

The third period starts off with penalties, and so far, Niagara is doing a fantastic job killing them off. At one point, Niagara defenseman Chris Harpur nearly scores on a breakaway while Niagara is down five-on-three. Unfortunately, the penalty killers can’t hold off RIT at the end, with the Tigers scoring to tie the game with 47 seconds left. Lammers calls up to Rhodes, and again there’s nothing to review, and it’s a good goal.

The game will go into overtime, which RIT wins just over a minute in, 3-2. Lammers challenges the goal to see if RIT was offsides on the play, but it counts, and the Purple Eagles miss out on a sweep of their thruway rival.

After the game, the players stretch and do exercises, and eat chicken parm from an area restaurant. An hour or so after the game ends, the players and coaches get back on the bus for the ride back to Niagara. Before the bus even leaves the Polisseni Center, Nicholson and Boschetto already have laptops out, watching video of the game. After eating a quick meal, Lammers does the same.

Occasionally, they’ll point something out to each other, but mostly watch quietly, taking notes on different plays to point out to players later on. The bus is quiet on the way home.

Respond to Michael Canfield on Twitter @MikeCanfield36, or at scoreboard@gnnewspaper.com.