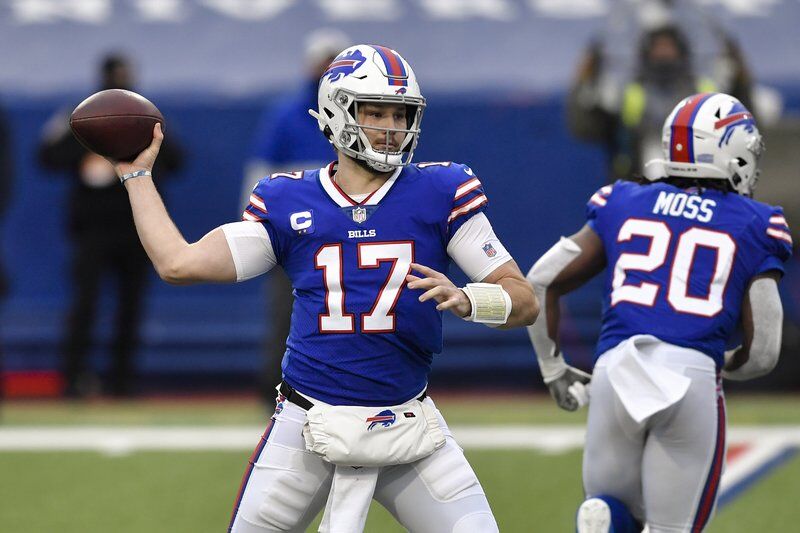 Buffalo Bills quarterback Josh Allen passes in the first half of Sunday's game against the Miami Dolphins in Orchard Park. 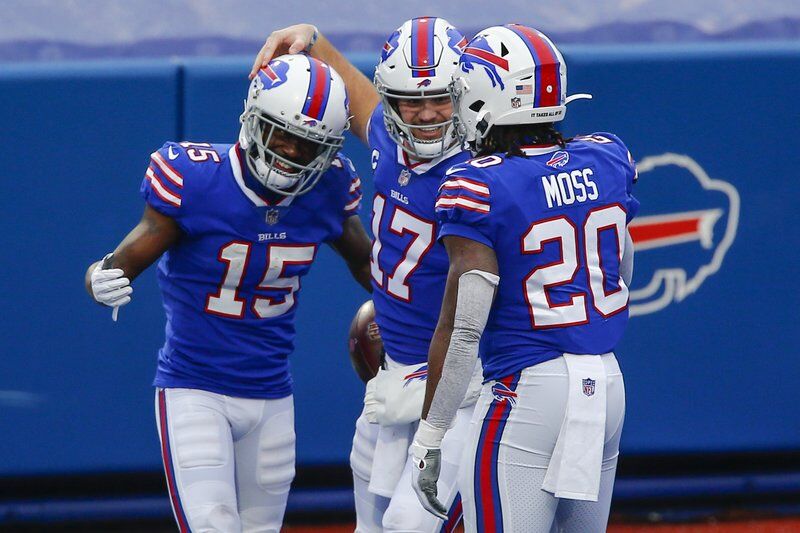 Buffalo Bills wide receiver John Brown (15) celebrates after catching a touchdown pass thrown by quarterback Josh Allen (17) in the first half of a game Sunday against the Miami Dolphins in Orchard Park.

Buffalo Bills quarterback Josh Allen passes in the first half of Sunday's game against the Miami Dolphins in Orchard Park.

Buffalo Bills wide receiver John Brown (15) celebrates after catching a touchdown pass thrown by quarterback Josh Allen (17) in the first half of a game Sunday against the Miami Dolphins in Orchard Park.

ORCHARD PARK — A little more than a year ago, Buffalo Bills general manager Brandon Beane was lamenting how his team needed to score more points.

Josh Allen and company certainly haven’t let him down.

In a game the Bills scored touchdowns in all three phases, and Allen got to rest after throwing three touchdowns in the first half, Buffalo put an emphatic stamp by closing the most prolific season in team history with a 56-26 rout of the Miami Dolphins on Sunday.

The win contributed to ending the Dolphins' playoff hopes, with the team eliminated after the Indianapolis Colts defeated Jacksonville later in the day.

One of the most overrated notions in sports is “which team needs it more.” There’s a myth th…

The AFC East champion Bills, meanwhile, secured the AFC’s No. 2 playoff seed, and prepare to face the Frank Reich-coached Colts in Buffalo's first home playoff game in 24 years next weekend. Reich is the former Bills backup who 28 years ago to the day led Buffalo to overcome a 32-point deficit in a 41-38 overtime win over the Houston Oilers in what still stands as the largest comeback in NFL history.

It marks the first time the Bills will face the Colts in the postseason and features a matchup of former East rivals before the NFL realigned its divisions in 2002.

Buffalo (13-3) finished with a season-best 501 points scored, matched a franchise record for victories set in 1990 and ’91, and looked nothing like the inconsistent team that finished last season by squandering a 16-0 second-half lead in a 22-19 overtime loss at the Houston Texans in an AFC wild-card game.

“I feel like I’m night and day compared to what I was last year,” the third-year starter said of a season in which he set team records for yards passing (4,544) and touchdowns passing (37).

Allen can now set his sights on helping Buffalo win its first playoff game since December 1995.

“We’ll find out who we play tonight, whether it be Saturday or Sunday. But we have to go out there and do our job,” Allen said. “This all means nothing. It gave us a chance that we wanted. Now we got to go take it.”

The Bills heated up after Allen closed Buffalo’s first series being intercepted by Byron Jones, which led to the Dolphins opening the scoring on Jason Sanders' 49-yard field goal.

Buffalo proceeded to score touchdowns on four consecutive second-quarter possessions, which included Isaiah McKenzie returning a punt 82 yards. Allen finished 18 for 25 for 224 yards with three touchdowns, two to McKenzie and another to John Brown.

Though it was a year ago, the loss to Houston remained on the minds of several Bills’ players.

“We have a feeling that we don’t want to feel ever again,” offensive tackle Dion Dawkins said.

“That fire and that burn we felt from losing it’s still in us,” he added. “That’s why guys are so hard on themselves, because we have to be the best at all times. And we know if we’re not, things like what happened in Houston can happen.”

Beane began addressing the Bills needs to produce more points by acquiring receiver Stefon Diggs in a trade with Minnesota in March. The move paid off with Diggs finishing the season with team records in receptions (127) and yards (1,535).

The Bills didn’t stop there, with Beane selecting Davis in the fourth round of the draft. With two catches for 107 yards on Sunday, Davis finished the season third among Buffalo receivers with 35 catches and 599 yards, and second on the team with seven touchdowns.

With Cole Beasley listed week to week because of a knee injury, Buffalo welcomed back Brown, who finished with four catches for 72 yards and a 32-yard touchdown catch. Brown returned after missing five games with a knee injury, while also spending a week on the reserve-COVID-19 list.

And Buffalo might not be done adding receivers, with the team closing in on signing veteran free agent Kenny Stills, a month after he was released by Houston.

Coach Sean McDermott last week acknowledged the Bills' interest in the eighth-year player, who must first pass a physical and the NFL’s coronavirus protocols before being added to the roster.