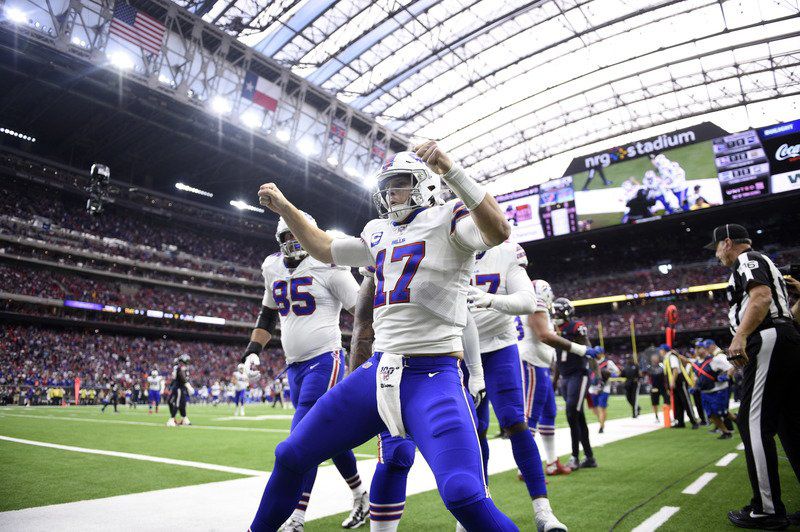 The Associated PressIn this Jan. 4 file photo, Buffalo Bills quarterback Josh Allen (17) celebrates after catching a pass for a touchdown against the Houston Texans during the first half of a wild-card playoff game in Houston. 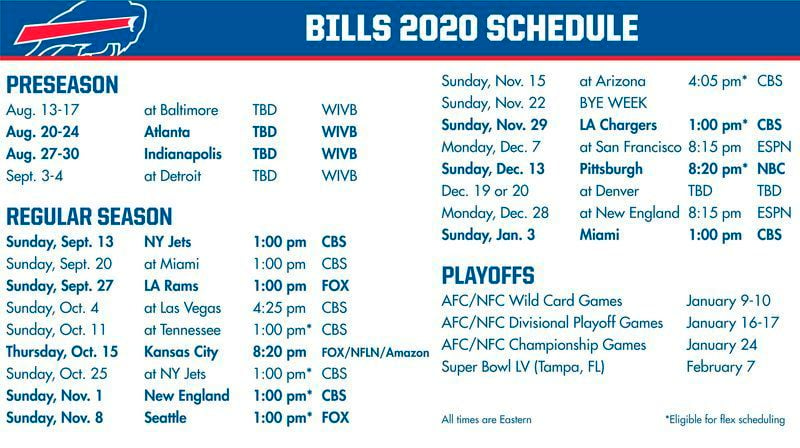 The Associated PressIn this Jan. 4 file photo, Buffalo Bills quarterback Josh Allen (17) celebrates after catching a pass for a touchdown against the Houston Texans during the first half of a wild-card playoff game in Houston.

If you're under 30 years old, you won't remember a Bills schedule like you'll see this fall.

The NFL granted Buffalo at least four prime time games when it released it's 2020 schedule Thursday night, including two at New Era Field. It's the most prime time games the franchise has had since 1996.

The Bills will open the season in a familiar way, hosting the New York Jets on Sept. 13. They then travel to Miami before opening returning home to play the L.A. Rams.

Two road contests sure to be huge travel destinations for fans — at Las Vegas and at Tennessee — follow before the first prime time contest, Thursday, Oct. 15 against defending champion Kansas City in Orchard Park.

The Bills play next at the Jets, then host New England and Seattle. A road game at Arizona leads into the bye week.

Buffalo returns Sunday, Nov. 29 to host the L.A. Chargers, then plays at least two straight in prime time — Monday, Dec. 7 at San Francisco and Sunday, Dec. 13 at home against Pittsburgh.

Week 15's game at Denver could flex to prime time and is scheduled for either Dec. 19 or 20.

The Bills then head to New England for the fourth nationally-televised contest, Monday, Dec. 28, before closing things at home against Miami.

The preseason will run Aug. 13 through Sept. 4, starting at Baltimore. Niagara Falls native Qadree Ollison will return home with the Atlanta Falcons, then Indianapolis will visit before a game at Detroit closes the exhibition slate.

Across the rest of the league, the Chiefs will open defense of their Super Bowl championship by hosting Houston on Sept. 10 in the NFL's annual kickoff game — pending developments in the coronavirus pandemic, of course.

The Texans won a regular-season game at Arrowhead Stadium in 2019, then blew a 24-0 lead in the divisional round of the playoffs.

Another highlight of the opening weekend will have Tom Brady's regular-season debut with Tampa Bay against Drew Brees at New Orleans on Sept. 13 — the first matchup of 40-plus quarterbacks in NFL history.

The opening of SoFi Stadium in the Los Angeles area that Sunday night has the Rams hosting the Cowboys.

Allegiant Stadium in Las Vegas will debut on the Monday night, Sept. 21, with the Raiders facing Brees and the Saints.

All of the 32 teams released their schedules early Thursday evening, with the full 2020 list scheduled to be revealed by the league a bit later.

The Chiefs, who won their first Super Bowl in a half-century last February, need baseball's Royals to move their game for Sept. 10, which now is part of a doubleheader two days earlier. The teams' stadiums share parking lots.

The NFL schedule, not to mention offseason activities and the preseason, has to be considered tentative given the current prohibition on large gatherings.

But Commissioner Roger Goodell has said the league is planning for a normal season, albeit while making contingency plans.

“The league and the clubs have been in contact with the relevant local, state and federal government authorities and will continue to do so,” NFL spokesman Brian McCarthy said.

The traditional Monday night doubleheader on opening weekend will have Pittsburgh at the New York Giants, which has a rookie head coach in Joe Judge, and Tennessee at Denver.

“The number one positive is we’re getting ready to play football, so that’s the biggest thing,” Judge said. “Once you get the schedule, it starts moving a little bit faster in your mind in terms of preparing for what’s in front of you.”

Top overall draft pick Joe Burrow and the Bengals start off against the sixth overall selection in April’s draft, Justin Herbert and the Chargers at Cincinnati. The Bengals also will face the other highly rated rookie quarterback Tua Tagavailoa and the Dolphins in Week 13.

New England, without Brady at QB for an opener for only the second time since 2001 — he was suspended for the first four games of 2016 — hosts Miami on the opening Sunday.

Thanksgiving games will have Houston at Detroit, Washington at Dallas, then one of the league’s fiercest rivalries with Baltimore at Pittsburgh in the night game.

Late-season Saturday games will be scheduled but with undetermined matchups for flexibility, something the NFL has done previously.

Certain to draw heavy early season interest will be the past two league MVPs, Patrick Mahomes and Lamar Jackson, facing off in Week 3 on Monday night at Kansas City. The Chiefs and Ravens each have five prime-time games, as do New England, Dallas, Green Bay, Tampa Bay, defending NFC champ San Francisco, and the Rams.

Detroit and Washington have no prime-time outings.

Every team has two home and two away games in the first month of the schedule. Whether that’s a quirk or by design is unknown.

The season ends Jan. 3 with all divisional matchups, as in recent years. Then follow the playoffs, with the Super Bowl slated for Feb. 7 in Tampa, Florida.

Pending developments with the coronavirus, of course.