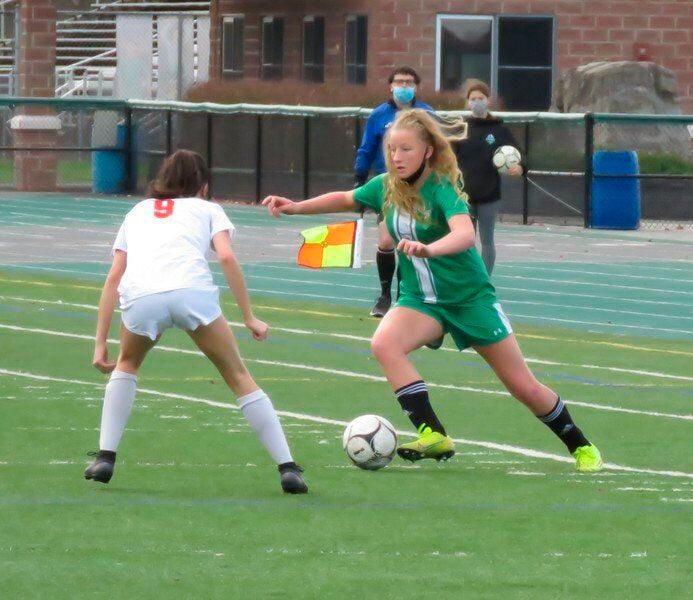 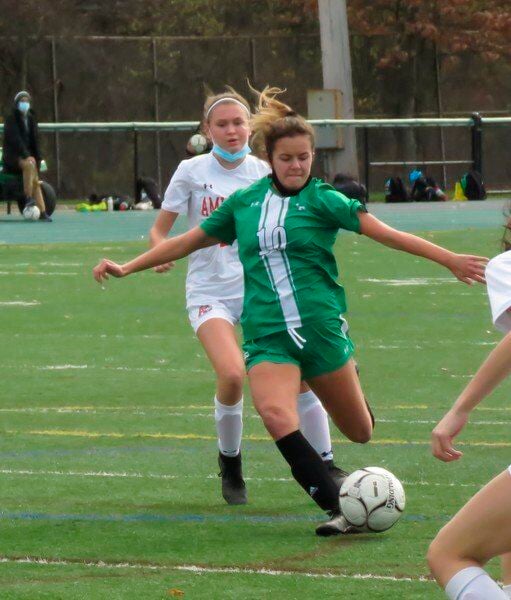 David Yarger/contributorJordan Niccola, one of 10 sophomores on the Lew-Port girls soccer team, takes a shot on goal during Wednesday's Class A-2 semifinal home win over Amherst.

David Yarger/contributorJordan Niccola, one of 10 sophomores on the Lew-Port girls soccer team, takes a shot on goal during Wednesday's Class A-2 semifinal home win over Amherst.

YOUNGSTOWN — The Lewiston-Porter girls soccer team's road to gold got off to a good start Wednesday. While it was no easy victory versus the No. 4-seeded Amherst Tigers, the Lancers got the job done at home, 3-2, and advanced the Section VI Class A-2 finals.

All the scoring took place in the second half, as both teams had minimal offensive opportunity in the first 40 minutes.

The Lancers' best opportunity in the first half came from the boot of sophomore Sophie Auer. The second-year varsity star found a lane and tried to chip the ball over the head of Amherst keeper Ella Wanzer, but the netminder made a terrific leaping stretch to poke the ball over the net.

The Tigers opened the scoring four minutes into the second half. After a pass into the zone, Amherst’s Mairin Cleary was in front of the net and nudged the ball with the side of her leg and past the L-P keeper for a 1-0 lead.

A little over 10 minutes later, Lew-Port got on the board and tied things up. Junior Sarah Woods’ 18th goal of the season tied the game at 1 with just around 24 minutes to go.

Lew-Port took the lead for good with 13 minutes left to play. Off a corner kick, Auer was finally able to head the ball to the back of the net for her 18th of the season.

Just minutes later, Auer was back at it again, as off a free kick, the ball went over her head, but she was able to stick with it and boot it past Wanzer to give the Lancers a commanding 3-1 lead.

Cleary and Amherst added another goal late with just around a minute and a half to go, but the comeback effort was too late and the Lancers held on.

The win pushes Lew-Port to the Class A-2 championship. It’s the first time the team has been in the final since 2018.

For coach Norman Forney, the success is great to see from such a young team.

“It’s really exciting. I think the girls deserve it and they’ve played really well this year,” Forney said. “It’s a rebuilding year. This is mostly sophomores and juniors. I only have five seniors. These girls really, really turned it up and I’m proud of them.”

The youth is definitely present on the Lancers roster, which has a one freshman, 10 sophomores, five juniors and those five seniors.

As the No. 1 seed, the Lancers got a true test from the Tigers on Wednesday, as the No. 4 seed took a lead and wouldn’t go down without a fight once the Lancers regained control.

“Amherst is very good. They’re big, they’re strong, they’re very well organized, good coach, and it’s always tough,” Forney said. “We struggle against Amherst every year when we play them in the sectionals. So to beat Amherst on our home turf is really special to us.”

Forney added that once Amherst got on top, they decided to go more defensive, and that’s when the Lancers were able to “turn it up and kept playing.” They never quit and that’s what “turned the game around.”

For Auer, both her goals were assisted by her sister, Graciana. Forney praised Sophie for the game she had and said the two goals were a dose of “Auer power.”

“Sophie Auer is a beast,” Forney said. “She’s a sophomore and she’s an incredible athlete. She has the best movement off the ball of any forward I’ve ever coached. It’s all natural. I’m really proud of her and I’m happy for her. I’m also happy for her sister who had the assist. That’s an Auer power goal.”

Auer, Forney and the rest of the young Lancers will attempt to hoist a Section VI title at 11 a.m. Saturday versus Williamsville South at Lew-Port High School.