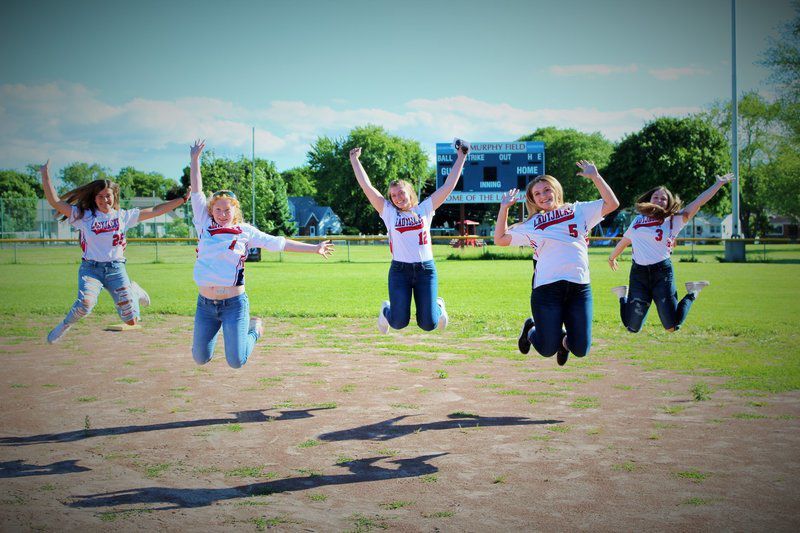 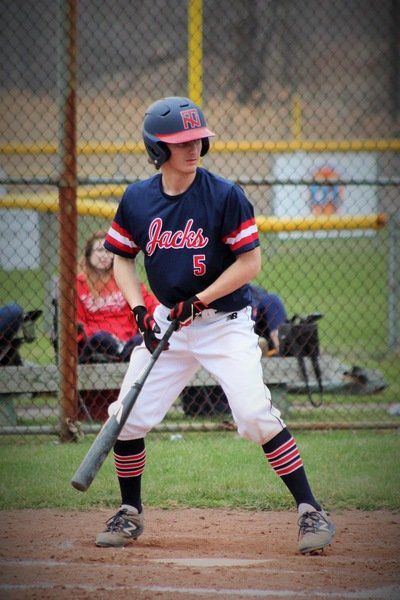 Contributed PhotoNorth Tonawanda's Bryan Toth steps to the plate during a in 2019, his junior season. 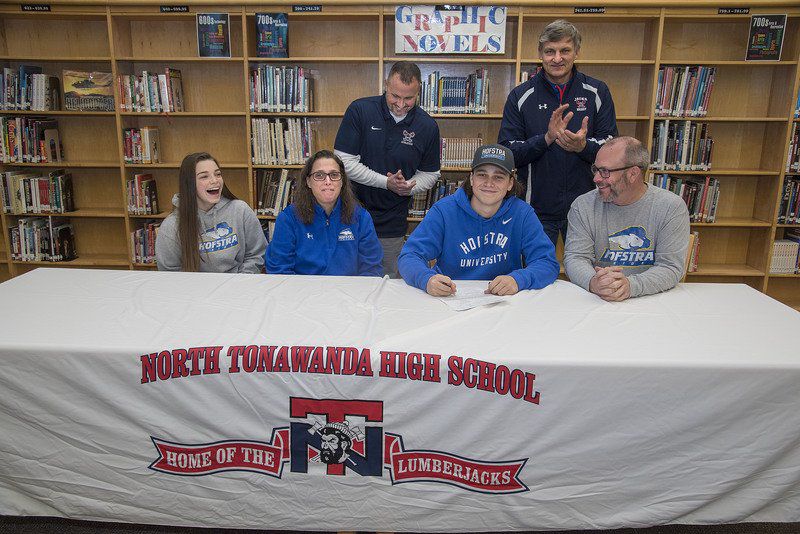 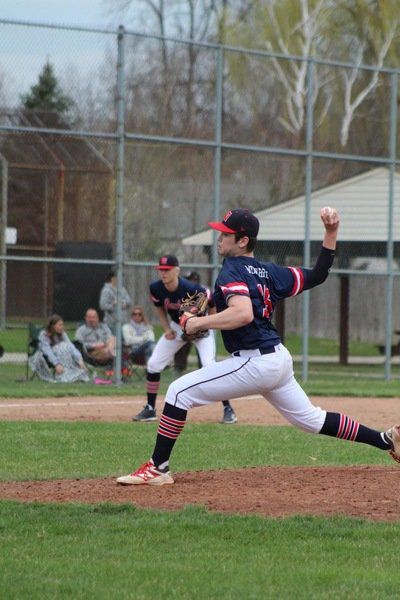 Contributed PhotoLiam McMurray, one of seven seniors on this year's NT baseball team, pitches for the Lumberjacks in 2019.

Contributed PhotoNorth Tonawanda's Bryan Toth steps to the plate during a in 2019, his junior season.

Contributed PhotoLiam McMurray, one of seven seniors on this year's NT baseball team, pitches for the Lumberjacks in 2019.

Expectations were high nearly across the board this spring in the Lumber City.

Baseball and girls lacrosse head coaches Eric Partell and Rochelle Ricchiazzi thought there teams might stack up against any in North Tonawanda high school's recent history.

Jaxon Hummel had a final shot to punch his ticket to the state golf tournament, and boys tennis was set to learn what life was like after Greg Hastings.

Hundreds of thousands of high schoolers across the country missed out on their spring athletic seasons, and the Lumberjacks were no different.

Let's take a look at what might have happened this spring under normal circumstances:

The 2020 season was years in the making for the Lumberjacks, led by six seniors who made up the core of a JV team that went 14-2 a few years back.

"It's obviously out of our control, but it was really disappointing this year specifically," said head coach Eric Partell. "We probably thought we had the best North Tonawanda baseball team of the last decade."

Camerin Holmes, the big pitcher who will play next year for Niagara County Community College, and slugging shortstop Liam McMurray were back for their third years on varsity, joined by second-year players Bryan Toth, Casey Rogers, Garrett McDonald and Aaron Priore. Jaxon Hummel, a golf star, even came out for the year to add some depth at pitcher.

The 6-foot-4 Holmes would have been one of the dominant players in the Niagara Frontier League, as a pitcher and designated hitter. He made third-team All-NFL as a junior just as a DH, despite being known for his arm.

McMurray would have been the Jacks' second pitcher while anchoring the lineup in the No. 3 or 4 hole.

"There's a lot of power in that bat," Partell said. "We were working on changing to hit for a higher average and just let the home runs come. The first few days of camp, from what we say, the swing was really looking good."

Toth, going to NCCC for CAD design, was heading into his second season as a captain, slated to start in right field and catch a few innings. He's an "awesome leader," per Partell. "Just that cliche guy, there first, leaves last, cleans up, gets the guys in order. I love coaching Brian."

Rogers, who'll head to NCCC for business, added a lefty bat in left field, earning an everyday spot last season. Partell was expecting a breakout season after Rogers "worked as hard as anybody during the offseason."

The speedy McDonald, a football player in fall, was another outfielder, lending his wheels wherever Partell wanted to deploy them. He's also going to NCCC looking to get his security license.

Priore, headed to Niagara to study teaching would have manned third base and an outfield while making a few starts on the bump.

Partell was also excited for juniors Paul Schwandt and Casey O'Bryan, a the team's catcher and centerfielder.

Schwandt was a returning starter, a "great baseball mind, good leader and catcher." Partell was "perfectly comfortable letting him call a game."

O'Bryan was shifting to center after playing left as a sophomore, when he made third team All-NFL.

"He's a guy who's working at it every day," Partell said. "His GPA is like 99, top of the class. I've talked to a few college coaches, and I feel like I'm laying with all the good things I say about him."

Rachel Kielaszek wanted to send her seniors off with some wins.

The NT head coach had a group of five seniors she'd hoped would help her team to a solid season, which would have been her ideal send off.

"We had a pretty good team this year if we were to have played," Kielaszek said. "I was thinking we were going to go pretty far this year, which would have been nice to see, to boost the confidence of the girls and send our seniors out that way."

Outfielder Victoria Wachowicz is headed to St. John Fisher, where she'll study nursing and play on the Division III team.

Second baseman Laykin Brennan and first baseman Emily Ford are planning on trying out at NCCC and Medaille, respectively. Brennan is going to study fine art, or enter law enforcement, while Ford is entering a dental program.

Pitcher Paige Walsh will head north to Niagara, where she'll take environmental studies and maybe play for the club team.

Faith Frye, who would have played outfield and spent some time behind the dish, will join Brennan and NCCC, where she'll learn baking.

"My five seniors were very big voices on the field and off in practices," Kielaszek said. "They were definitely the ones who, if anyone needed help, jumped right in. They would have been amazing for (the younger) girls."

Those younger girls include two freshmen, Lexi Brennan, Laykin's sister, and Haleigh suitor, who both would have seen some time in the outfield. Sophomore Brianna Starr was also a name to watch in her first season starting at shortstop.

Jaxon Hummel and Casey O'Bryan both would have had a decision to make this spring, had their baseball season conflicted with the Section VI golf state qualifier.

Both qualified with their performances in the fall's NFL tournament, Hummel outright and O'Bryan as an alternate.

Hummel, a senior signed on to golf for D-1 Hofstra, would have been a favorite to go to states, according to head coach Al Zbytek.

"Last year he was an alternate, then they didn't need him so he didn't go," Zbytek said. "This year I totally expected that he would be one of the top-five golfers in the (section) and he could have gone."

Rochelle Ricchiazzi, in her first season as head coach, inherited a team with 16 seniors, many of whom she'd coached their entire careers dating back to JV.

"I was really excited," Ricchiazzi said. "I thought we were going to do great this year. I had so many seniors, so many girls who had so many years playing. I don't think NT has had that, at least from what I've seen."

Leading the seniors were Miranda Hakes, a goaltender, and defenders Megan Uplinger and Tammy Marillo.

Ricchiazzi, who played for Sweet Home until her graduation in '09, had a message for her outgoing group:

"We had a couple group messages, I apologized to them that they really missed out on a really good season," Ricchiazzi said. "I know some of them wanted to continue playing, in college or elsewhere.

"I told them the game's not over. They can still play. I love picking up my stick still. It's not something you have to miss forever. I know this was a big season, but lacrosse isn't over."

This was the Jacks' first year without Greg Hastings, the state-level star who'd dominated the NFL over the last six seasons.

Sophomore Lucas Mateyvich was "more than likely" going to take ver at first singles, per head coach John LeMar, while the team's lone senior, Anthony Marchioli, also would have stepped into a larger role.

"(Marchioli) had improved quite a bit over the last couple years," LeMar said. "You really feel bad for the seniors."

Junior Ian Caskie also likely would have held a starting spot somewhere, while LeMar used the early spring practices to set the rest of his lineup.

Sean Kibrick's Lumberjacks were light on seniors after graduating a large class in 2019, but that doesn't mean there were no standouts.

Tim Osborne, who will walk on to football and track and field at UB while studying biomedical science, and Erie CC-bound Zac Szymczak would have been big point-scorers in throwing.

"Tim was one of the better discus throwers in the NFL last year," Kibrick said. "He would have been up there for a league championship.

Ryan Plumer (Fredonia, education) would have been the team's top long and triple jumper, while AJ Miskines (Syracuse, digital journalism) was a standout in mid-distance running and the pole vault.

Kibrick was excited to see what his juniors and sophomores, like Nolan Anson, JP Barone, Jackson Chlebowy, Gabe Christopher and Toby Cruz, would have done this spring.

Chlebowy was a coming off a Section VI finalist performance in the 300 during the winter season, while Anson would have joined a 4x400 relay team with sectional aspirationss

Wojtaszek was "one of our best jumpers for the last couple years," jumping the triple and high while also running in whatever relays were needed. She'll go on to Colgate, where she'll study pre-med and consider both cheerleading and track and field.

"She was a big part of the team," Kibrick said.

Marshall, another jumper, is headed to Florida Southwestern to study marine biology.

Dessap, the team's top thrower, was undecided on where she'd head next.

McNeill was set to do a bit of everything for NT.

"She's one of the top returning pentathletes," Kibrick said. "Field events, hurdles, 800, a lot of different events. She's one of the better multi-event athletes in the NFL and the section."

Hanes, on varsity since seventh grades, was the Jacks' top sprinter, while Annunziato led the mid-distance runners. Orlowski was another sprinter and also ran hurdles.