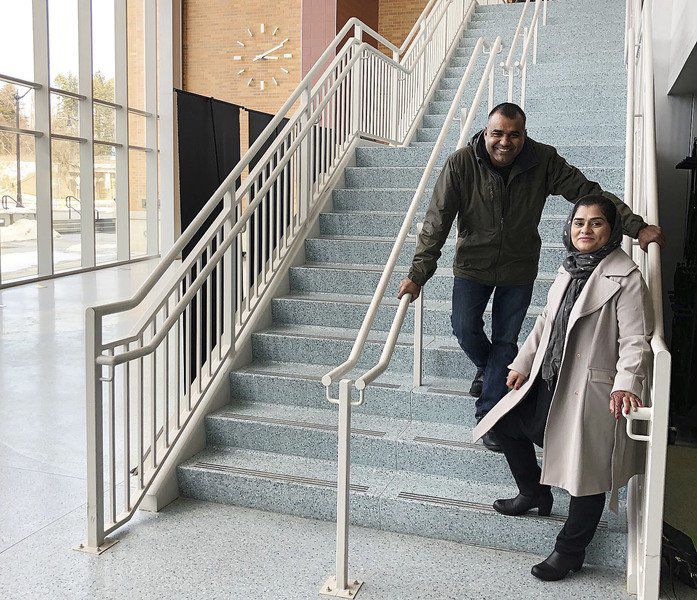 Michele DeLuca/staffAnas Mangla and his wife, Nasreen Akhtar, stand on the steps at the Niagara Falls Train Station where they are holding a free lunch and will be giving away clothes and food on Saturday, with volunteers from their Niagara Falls chapter of Ahmadiyya Muslims and Niagara Falls Peacemakers. 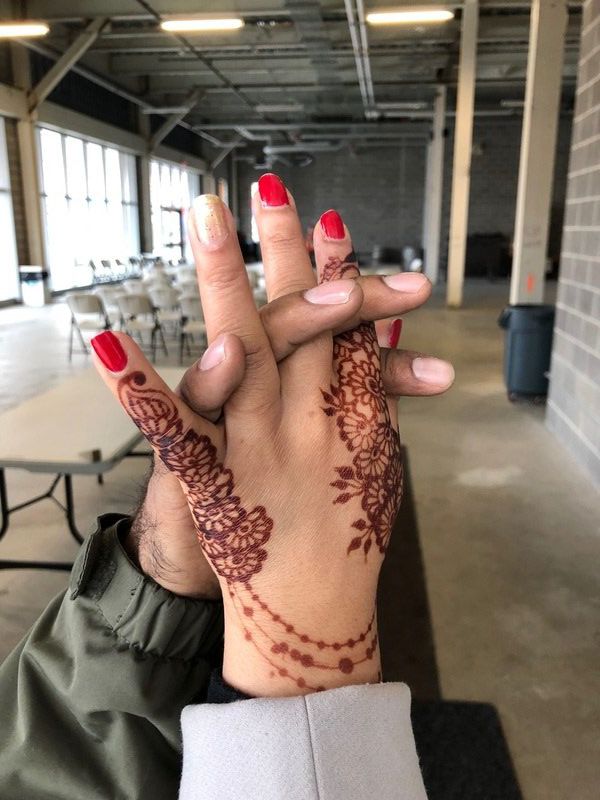 Michele DeLuca/staffThere will also be free henna tattoos for the ladies at Saturday's event at the train station, as demonstrated on Nasreen Akhtar's hand.

Michele DeLuca/staffAnas Mangla and his wife, Nasreen Akhtar, stand on the steps at the Niagara Falls Train Station where they are holding a free lunch and will be giving away clothes and food on Saturday, with volunteers from their Niagara Falls chapter of Ahmadiyya Muslims and Niagara Falls Peacemakers.

Michele DeLuca/staffThere will also be free henna tattoos for the ladies at Saturday's event at the train station, as demonstrated on Nasreen Akhtar's hand.

On this Valentine's Day, it's always nice to celebrate a labor of love, especially when that love is shared with the entire community.

I went over to the Niagara Falls Train Station this week to meet with a very nice couple who are leading efforts by local Muslims reach out to the community with love.

Anas Mangla and Nasreen Akhtar and members of their mosque on Colvin Boulevard are holding a free lunch and giveaway of clothes and non-perishable food to benefit the less fortunate in the train station at 825 Depot Ave., in Niagara Falls from noon to 2 p.m. on Saturday.

They will be joined by Niagara Falls Peacemakers and other community advocates and there will be a free lunch provided by a Dirty Bird Chicken-n-Waffles food truck for the first 200 people who attend.

Those paying attention to local food news know that Raul Parker, owner of the popular Dirty Bird Chicken-n-Waffles food trucks, opened a brick-and-mortar restaurant at 6004 Buffalo Ave., just this past weekend. As if he doesn't have enough on his hands, Parker, also a Niagara Falls police officer, is providing the free lunch. I've tasted his food, so I know people who attend are in for a treat.

Leading the event on Saturday are Mangla and Nasreen and volunteers from the Ahmadiyya Muslim Community Buffalo Chapter mosque, located at 9610 Colvin Blvd. in Niagara Falls, part of a national association whose slogan is "Love for all. Hatred for none."

So, what exactly are Ahmadiyya Muslims?

Nasreen explained it to me in an email, writing: "Ahmadiyya Muslim Community is the oldest organized Muslim entity in the USA, established in 1920. We do volunteer and social work throughout the USA and the rest of the world (blood drives, medical clinics, sports, highway clinics, food kitchen, shelters, etc.)  Our services are for Muslims and non-Muslims alike ... and the people with no faith."

I think that's pretty impressive, reaching out to help anyone in need, regardless of faith or lack thereof.

And, if you think it's challenging being a devoted Muslim in today's world, it may be even more challenging if you are of the Ahmadiyya faith.

Unlike the majority of Muslims, the Ahmadiyyas believe that the savior is already born. Other Muslims are still waiting. This makes Ahmadiyyas pariahs in many Muslim cultures in the Middle East and around the world.

Nasreen explained it like this: "Established in 1889, Ahmadiyyas are the fastest spreading Muslim group in the world. However, we are still a minority in places such as India, Pakistan, Bangladesh and the Middle East. And due to this, there's always persecution against our community members throughout most of the Muslim world."

The main difference between her faith and mainstream Muslims, she told me, is that Ahmadiyyas believe that the founder of their community, Mirza Ghulam Ahmad, born in 1835, is the promised Messiah that Muslims, as well as the other religions, are waiting for. That appears to upset some fundamental mainstream Muslims.

Mangla and Nasreen both immigrated to America with their families from Pakistan when they were young, and each family was seeking the freedom to practice their faith and to work toward the American dream of prosperity and success.

The couple are grateful for the freedoms many Americans take for granted and have devoted themselves to being good and industrious citizens while reaching out to help others.

Just before Thanksgiving, the two led efforts by their chapter to give away about 200 free turkeys, also at the train station.

"My husband and I like to serve the community. And this is due to our upbringing and strong faith in God," Nasreen told me.

The American Ahmadiyya Muslim Community celebrates its 100th anniversary this year and Saturday's event is a celebration of that centennial mark. There will be free henna tattoos for the ladies, as well as information on breast and prostate cancer awareness and additional giveaways of clothing from the Niagara Falls Peacemakers.

For readers who won't be making it to Saturday's event, because they may not be in need of a free lunch or clothing and food giveaways, I encourage you to make a visit to the new train station in the near future and while you are there, visit the remarkable museum there — the small but mighty Underground Railroad Railroad Heritage Center.

Some readers might want to remember this couple, Anas Mangla and Nasreen Akhtar. They are community members seeking to do even more. Nasreen told me she is currently planning to create a group to help women who want to learn how to create a better life for themselves.

Those interested in understanding more about the Muslim faith might even consider reaching out to them and their chapter to assist in their efforts to help the less fortunate in our region. We all know many hands doing good deeds make light work for all.

Contact Lifestyles Editor Michele DeLuca at 282-2311, ext. 2263 or email her at michele.deluca@niagara-gazette.com.