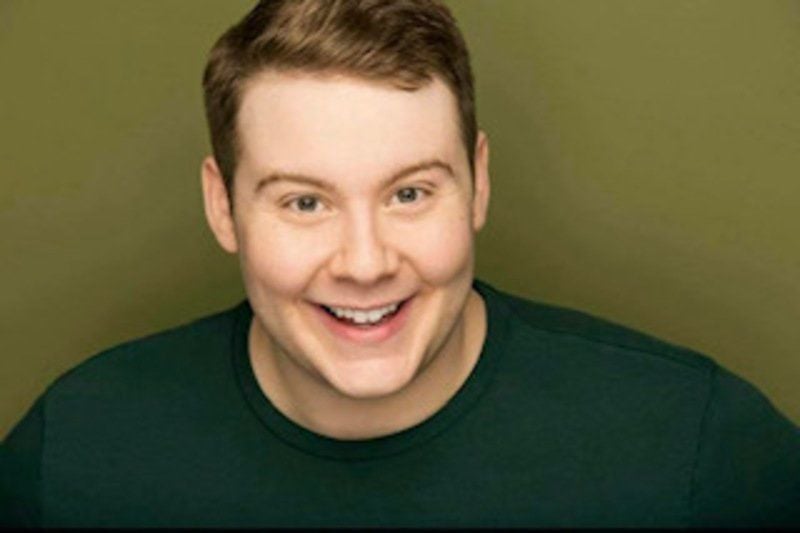 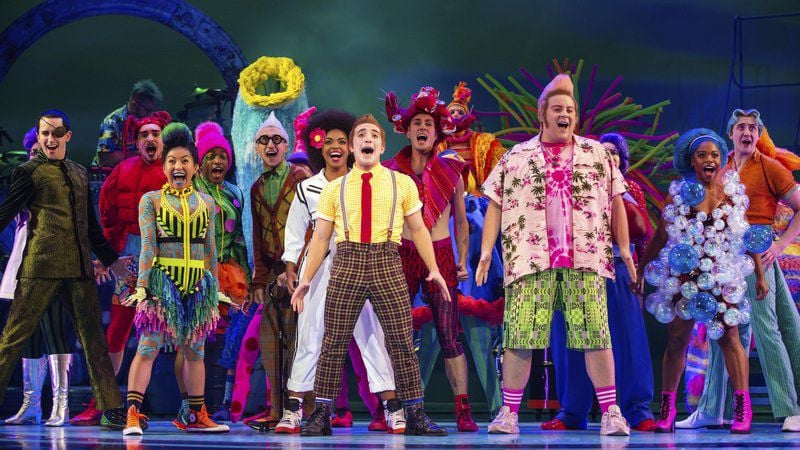 Contributed PhotoBeau Bradshaw, a Niagara-Wheatfield High School graduate, plays Patrick, SpongeBob SquarePants best friend in the touring production of "SpongeBob: The Musical." Lorenzo Pugliese as SpongeBob is center in the plaid pants, Bradshaw is standing next to him in the flowered shirt.

Contributed PhotoBeau Bradshaw, a Niagara-Wheatfield High School graduate, plays Patrick, SpongeBob SquarePants best friend in the touring production of "SpongeBob: The Musical." Lorenzo Pugliese as SpongeBob is center in the plaid pants, Bradshaw is standing next to him in the flowered shirt.

When Beau Bradshaw was in New York last year with his mom to sign a contract with a talent agent, he begged her to go with him to see "SpongeBob SquarePants: The Broadway Musical." She wasn't so keen on seeing a show based on a cartoon.

"There were so many other great plays to choose from," she said recently. But Beau, 23, a Niagara-Wheatfield High School grad and aspiring musical theater star, grew up with the cartoon and dreamed of playing Patrick — a fun-loving sea star — on stage.

By the closing curtain, Tammy Nicholas had changed her mind. "It was one of the best shows I’ve ever seen," she said. "You’re entertained, you're laughing, you're crying. Before I left there, I bought a (show) hoodie. I said to Beau, I'm not going to wear this until you are playing the part of Patrick."

This week, Tammy Nicholas is wearing the hoodie she purchased on Broadway, as her son is now playing the role of Patrick in the touring production of "SpongeBob the Musical."

She said it was easy to predict her son would play the role one day, as he's a lot like the character of Patrick. "Beau is bigger than life," she said. "He’s 6'4", he’s built like a football player but he’s just a big lovable character and that's how Patrick is."

Beau, reached in Hartford, Connecticut on Monday, one week into the year-long tour, is loving the opportunity to play his favorite character from his favorite childhood cartoon.

He's the kind of kid who asked him mom for tap dancing lessons when he was 3. She's says he's been keeping the family entertained since then.

"I’ve just always known this was what I’m meant to be doing," said Beau, who performed in a variety of school performances and plays and whose favorite high school performance was playing Shrek in "Shrek: The Musical."

His high school theater teacher Diane Dibernardo said her former student is a natural. "Beau was born to be an entertainer," she said. "There is just a certain magic that happens when he is on stage. I've known and taught many talented young people through the years, but Beau has that special something that makes him stand out from the crowd — his personality, work ethic, and that exceptional singing voice make him a triple threat in my book."

The rest is history. Or at least the beginnings of Beau Bradshaw's career on stage, though he also had a few other lessor roles to date, this is the one that allows his star to shine.

"The score is phenomenal," Beau said of the musical. It includes songs written by rock star Steven Tyler and Joe Perry of Aerosmith, and other pop stars including Sara Bareilles and John Legend. "I get to sing a song by Yolanda Adams, the gospel singer, called "Super Sea Star Savior," he said.

"It's an amazing show with an amazing message," he added about the play, crediting director Landau for finding the humanity in each character, dressing them like everyday people with hints of their cartoon character in their costumes.

Those who want to see Beau Bradshaw in "The SpongeBob Musical," will get a chance when the play hits Toronto, Dec. 17-22. For ticket information and the entire touring schedule, visit www.thespongebobmusical.com.