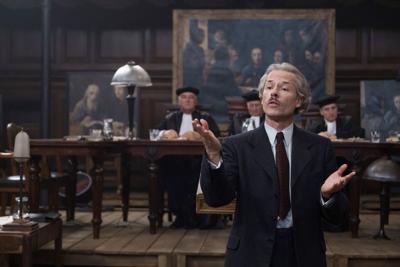 Danish actor Claes Bang has made three movies set in the art world: “The Square,” which won the Palme d’Or (the grand prize) at Cannes in 2017; “The Burnt Orange Heresy,” which I reviewed in September; and now “The Last Vermeer,” which is currently playing only in movie theaters.

Bang, whose 53rd birthday was April 28, could be a replacement for Daniel Craig’s James Bond, although he may be a shade too old to start playing 007. However, at 6 feet, 4 1/2 inches, he’d be the tallest Bond.

In “The Last Vermeer,” Bang plays a Dutch Jew named Captain Joseph Piller, who is working with the Canadian military overseeing the Netherlands after World War II. Captain Piller’s mission, which he chooses to accept, is to handle the case of a bon vivant host of popular soirees – and art forger – named Han van Meegeren, who cavorted with Nazis in Holland.

Johannes Vermeer, an important and beloved 17th-century Dutch artist, painted only 34 known works. There’s a mysterious Vermeer painting that makes no sense. It shouldn’t exist. Is it real? Why did powerful Nazi Party official Hermann Goring have it for a time in his possession? Did van Meegeren paint it? Was he actually working against the Nazis to swindle them of their money by selling them fakes? Will he face a post-war firing squad?

The movie, directed by American billionaire and movie producer Dan Friedkin, and written by John Orloff, Mark Fergus, and Hawk Ostby occasionally drags a bit and repeats itself at times, but overall this richly detailed production holds your interest and comes shining through because of a very entertaining closing third, a trial that rolls along like an episode of television’s Perry Mason. And, it’s all true.

Bang and a realistic supporting cast are very good, but it’s Guy Pearce as van Meegeren that you really want to see. He is brilliant as this gloriously flamboyant peacock with an ability to paint magnificently, the gift of gab, and a knack for survival. He’s the best “character” I’ve seen so far this year. An Oscar nomination for Pearce is required.

“The Last Vermeer” is both a satisfying caper adventure and a testament to the power of art.

THREE OTHER FILMS ABOUT ART AND WORLD WAR II: Here are three additional movies that tell stories about looted or controversial works of art, which I highly recommend. All are suitable for viewing by adults and teenagers, as well as pre-teens who enjoy watching films with some substance to them. Learning important aspects of history through movies is a time-honored tradition.

“The Train” is directed by John Frankenheimer and takes place as the Allies are about to retake Paris in August 1944. A German officer, Colonel Franz Von Waldheim (Paul Scofield) has plans to remove artistic masterpieces looted by the German army from France by train. A museum curator seeks help from the French Resistance to stop him.

In this 1964 release, railway inspector Paul Labiche (Burt Lancaster) battles to save the paintings and sculptures by attempting to deceive Von Waldheim in clever and suspenseful ways. (Note: scenes of violence and war – innocent French villagers being shot, for example – may preclude young children from watching this.)

“The Monuments Men” is a tad underrated, although it did take in $155-million at the box office in 2014. The cast includes George Clooney, who also directed, Matt Damon, Cate Blanchett, Bill Murray, John Goodman, and Jean Dujardin. The film unreels like an old-fashioned war tale – a good thing – and is about rescuing important works of art hidden away by the Nazis, primarily in Italy.

A group of older military veterans are cobbled together to save hundreds of magnificent works of art. The story covers the period between 1943 and 1945. The terrific cast and superb production team features an extensive list of Oscar winners and nominees. The true story is based on an informative book, “The Monuments Men,” by Robert M. Edsel with Bret Witter.

“Woman In Gold” was released in 2015 and is directed by Simon Curtis. It’s based on the actions of Maria Altmann, an elderly Jewish refugee living in Los Angeles, who, together with her young lawyer, Randy Schoenberg, fought the Austrian government through the 1990s and into the early 2000s to reclaim artist Gustav Klimt’s extraordinary painting of her aunt, “Portrait Of Adele Bloch-Bauer I.” Often called “The Woman In Gold,” it was stolen from Altmann’s relatives by the Nazis in Vienna just before the start of World War II. Austria laid claim to the painting, which was revered as a national treasure.

Altmann’s case went all the way to the United States Supreme Court, which ruled on Republic Of Austria v. Altmann in 2004. The film is a solid legal thriller that makes a dry subject, the United States’ Foreign Sovereign Immunities Act, come alive. Helen Mirren as Altmann is spectacular. The film also stars Ryan Reynolds as Schoenberg, as well as Daniel Bruhl, Elizabeth McGovern, and Jonathan Pryce.

The painting is on permanent display at the Neue Galerie at 1086 Fifth Avenue in Manhattan. I’ve seen the work, and it’s truly impressive.

These three movies are available on DVD and Blu-ray and can be rented online from a variety of sources. “Woman In Gold” is also available free on Tubi TV and Pluto TV, both of which run advertisements.