Photos by Michele DeLuca/StaffDirector Pat Whalen sits upon his desk, a rolling file cabinet, at the new TReC center at 616 Niagara, opened by the Niagara Global Tourism Institute to aid local entrepreneurs. 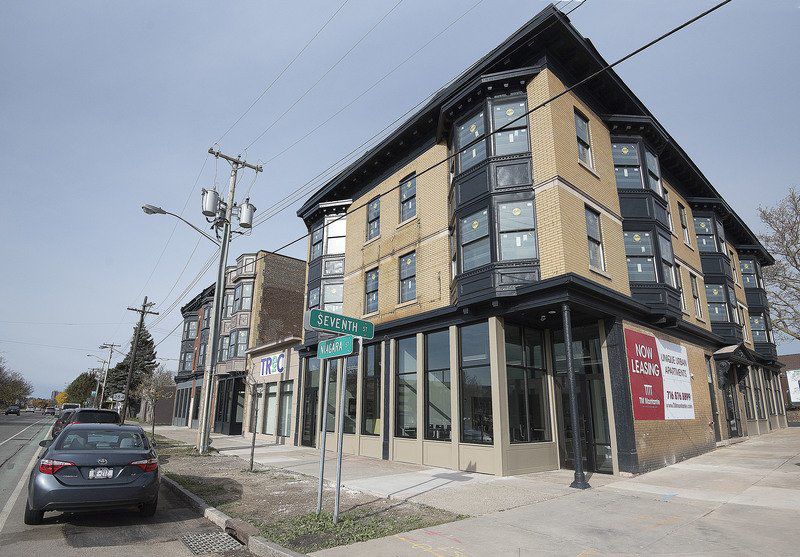 Photos by Michele DeLuca/StaffDirector Pat Whalen sits upon his desk, a rolling file cabinet, at the new TReC center at 616 Niagara, opened by the Niagara Global Tourism Institute to aid local entrepreneurs.

Those passing by may have noticed the changes at 616 Niagara St., but it's likely few know what's happening inside the newly renovated buildings.

They may have seen the colorful sign that reads "TReC" but probably wouldn't guess it's a place where small businesses are born and supported, like eggs in an incubator. It's a place, people say, where dreams very well could come true.

So, what exactly is TReC? To hear people talk, it's a place where anyone who has an idea for a business can get assistance on how to create and grow that business. The ultimate goal of the place is more successful businesses in Niagara Falls and all the financial benefits that come with such success.

TReC is modeled after a small business incubator called "dig" in the Buffalo Niagara Medical Campus, created by Pat Whalen when he was chief operating officer of the campus during its evolution as a center for medical innovation. Dig was created to help grow small businesses in the area of research and medicine with co-working and event spaces, educational and networking opportunities and personal mentors.

Whalen — now the director of Niagara University's Global Tourism Institute —  recently led the unveiling of TReC, a small business incubator very much like Dig, but with travel and tourism leanings. Clearly a fan of unusual names, he decided to call the Niagara Falls incubator TReC because he said starting a business is much like a trek up a mountain.

"Starting and growing businesses is like climbing Mount Everest," Whalen explained recently during a tour of the new building, which is comprised of two formerly abandoned buildings at the corner of Niagara and Seventh streets. "The ones that make it have guides. Nobody can do it alone, that's why we have guides or sherpas as we call them."

The idea is that small business owners or those who hope to open a small business, can purchase a membership to the center for $100 a month.

"Anybody who has an idea for a business, we want them in here. We have resources to help get the idea out of their head and on to a piece of paper so they can start a business," Whalen said. "If they can't afford $100 a month, we'll give them three months free and after three months, we'll evaluate."

Members receive a key fob to use the facility whenever they need it and have access to "sherpas," classes, networking and more, including a coffee shop set to open soon at the site by local chef Bobby Anderson.

During a recent visit, there were a wide variety of "sherpas" and new members and others at the center representing those who might benefit from participation at TReC. They included:

• Anthony Billoni of ABC Creativity, who has a masters degree in creativity from Buffalo State College. "You can never know enough when you are starting a business. You need more of almost everything and to have people along the side to help you and maybe put some guardrails on the road once in a while is a good thing." Besides that, he appreciates Whalen's previous successes and Whalen's mantra to "keep hitting singles. You can bring in a lot more runs with singles," he said.

• Joe Bell, director of the Niagara Aerospace Museum for the past two months, a retired chemist from Moog and a professor at the University at Buffalo business school. "I started talking to Pat about the museum maybe a year ago, and he started telling me about this place," he said of TReC. "I'm down here to help Pat help entrepreneurs."

• Rick Winter of Richardson Management who, beyond being a "sherpa," is planning to seek out community and business leaders to sponsor students who want to join TReC. "If a young student has an idea and he wants to start a business, I’m going to be a mentor," he said.

• Jack Martin, owner of J. Fitzgerald Group advertising in Lockport, who is considering signing on as a "sherpa," because one day a week he can work from the TReC offices. He is a big fan of Pat Whalen. "He’s going to turn the city around, just like he did with Buffalo," Martin said. "I’m convinced there’s only one person can do it and that’s Pat."

• Ross Blaine, a professional mentor from Brantford, Ont., and creator of a training app, noted he's "very much interested in what's happening down here," particularly as led by Whalen. Blaine is convinced the TReC center has great potential. "If it gets support form the community and the government," he said, "it will be the spark plug that is needed to turn this area around."

• Dolly Michelle Randle is the owner of Compliance & Administrative Services of New York and a business mentor who has already created two entrepreneurial programs in the Niagara Falls School District and worked with Whalen at Dig. She has an office at TReC and her hope is to reach out to women, minorities and especially students. "I’m going to teach them how to start businesses," she said.

• Nicholas Hurd, 33, owner of Niagara Falls Adventure Tours, a two-year-old walking tour company, who says his membership has already begun to pay off. "It's opened up a lot of doors," he said, noting that he's already met "sherpa" Joe Bell who is the new director of the non-profit Niagara Aerospace Museum. The two are already talking about ways to enhance both of their businesses.

• Gaelan Baillie is the owner of an eight-year-old rental business offering bikes, wheelchairs, scooters and other mobile devices in downtown Niagara Falls. He is a member because he appreciates networking and learning more about connections to working capital. “You need money to grow,” he said. Baillie, who has worked alone to grow his business, noted, "It can be hard to stay motivated if you are not working with someone every day." He also appreciates the value of experience that mentors can share. "Say you have a hiccup — you can talk to someone whose done it before and what they've done about it," he said. "It's inspiring and keeps you motivated."

• Sara Battaglia Hrywnak, owner of Olive Ridley Paints in Niagara Falls, appreciates help finding strategic partners to help her grow her three-year-old business. "If you are an entrepreneur and you want to get involved in technology or any sort of startup, this is a great place for people to collide," she said, borrowing a word she heard when she first toured the Buffalo Niagara Medical Campus when Whalen was COO. She has already taken advantage of TReC's open spaces available for member use and had a meeting last week with a potential investor in her paint company.

• Jim Vitous, East Aurora, is a new TReC member exploring the idea for a novelty bar in Niagara Falls that would seek to break the record as the world's most visited bar. "This is a place for me to come and see if I’m crazy or not, and to get some ideas," he said.

For more information about TReC, visit the center at 616 Niagara St., Niagara Falls, or visit online at https://trecbyngti.com.

• A better look at what's happening inside TReK on Niagara Street. LOCAL, 8A

VIDEO: Take a tour of TReC

Ruth E. DeVantier, of the Town of Cambria, NY, passed away on Sunday, February 16, 2020, in Our Lady of Peace Nursing Facility. She was born in the Town of Wheatfield, NY, on November 4, 1929, the daughter of the late William and Louise [Broecker] Mueller. Ruth was a Tupperware dealer for ov…