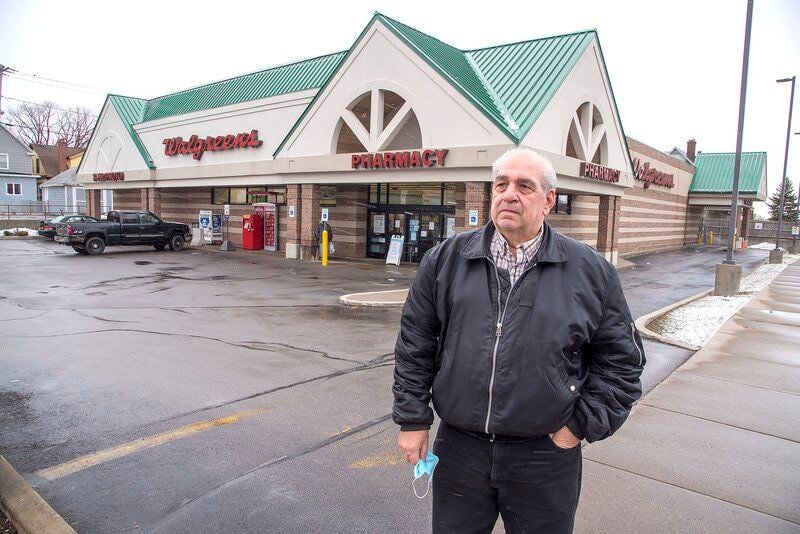 Joseph Rizzotto and a group of other residents were led to believe there was a first come, first served COVID-19 vaccination event at the Niagara Falls Walgreens on Saturday morning. (James Neiss/staff photographer) 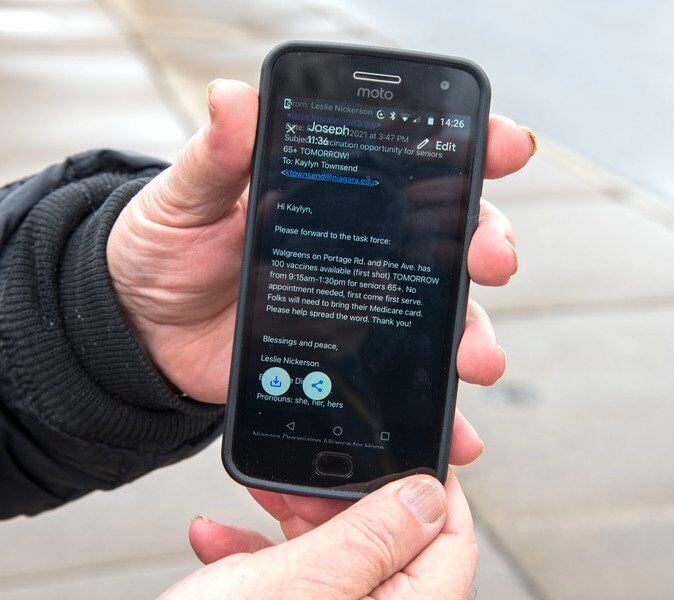 Joseph Rizzotto and a group of other residents were led to believe there was a first come, first serve COVID-19 vaccination event at the Niagara Falls Walgreens on Saturday morning. (James Neiss/staff photographer)

Joseph Rizzotto and a group of other residents were led to believe there was a first come, first served COVID-19 vaccination event at the Niagara Falls Walgreens on Saturday morning. (James Neiss/staff photographer)

Joseph Rizzotto and a group of other residents were led to believe there was a first come, first serve COVID-19 vaccination event at the Niagara Falls Walgreens on Saturday morning. (James Neiss/staff photographer)

Seventy-five seniors stood in the cold rain hoping to get a COVID-19 vaccine Saturday morning outside the Pine Avenue Walgreens and left frustrated, angry and unvaccinated.

Like many citizens, Joe and Nancy Rizzotto of Lewiston have been living a sheltered existence during the pandemic, limiting exposure and biding time until they can acquire a Covid vaccine.

They thought they found the answer last week when Nancy saw a story on WKBW-TV that Walgreens at 1202 Pine Ave. would have 100 doses of vaccine available on Saturday beginning at 9 a.m. on a first come, first served basis. An email from NOAH (Niagara Organizing Alliance for Hope) promoted the same event.

“We got there, we were standing outside in the freezing cold with a lot of people who couldn’t walk,” Mr. Rizzotto said emphatically. “They couldn’t hardly even walk. It was ridiculous. There were people who got there as early as 7:30 a.m.”

Rizzotto said pharmacy staff came out shortly after 9 a.m. and told those gathered there was no vaccine available and they needed to make an appointment.

“Boy I tell ya,” Rizzotto said, “we wanted to break the windows. I was livid. We stormed the store after. People were furious.”

His daughter has been working online to find Joe, 74, and Nancy, 71, vaccines but has not yet succeeded. He is a retired auto mechanic and DuPont pipe fitter.

Mr. Rizzotto said he’s used the pharmacy for years for his prescriptions for years but won’t be doing so any longer.

An online posting at WKBW still online Sunday said reservations were required but it may have read differently on the air. Paul Ross, whose name appeared as a byline on the WKBW story, did not return an email seeking comment.

Christopher Shanahan, store manager, said Walgreens has a media policy that any comment needed to come from corporate. The number he provided did not lead to easy access for a spokesperson. The WKBW report puzzled him.

“I didn’t call (the TV station),” he said. “Nobody at the district, area or region called.”

He said the pharmacy had 100 doses of Moderna vaccine and follows protocol to contact people on a waiting list should any slots become available.

“We never put it out there that anything was available on a first-come, first-served basis,” Shanahan said as he escorted this reporter from the store noting the last thing he would ever want was for his loyal customers to needlessly wait in the cold, winter rain.

Leslie Nickerson, NOAH executive director, said her board chairperson, Bishop Jesse Scott of Word of Life Ministries received a call and shared the information with her.

“We got some information but we didn’t get correct information,” she said. “There were lots of different ways people hear about it. It’s really a case study of what happens when there is not a centralized resource.

“We sent a correction as soon as we could but once you send something out, people run with it.”

For Nickerson, it’s a sad symbol of desperate times.

“We just keep hearing about people being frustrated because we need more vaccine and we aren’t getting it. We have waiting lists.”

As of 4:45 Monday, at https://am-i-eligible.covid19vaccine.health.ny.gov/, there were no vaccine appointments available.