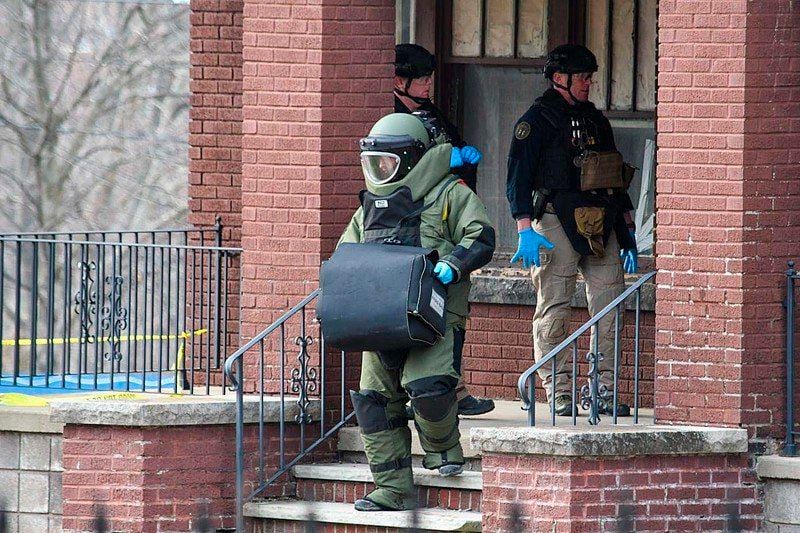 A member of the State Police Bomb Disposal Unit brings a suspected explosive device out of a Cedar Avenue apartment on Thursday. 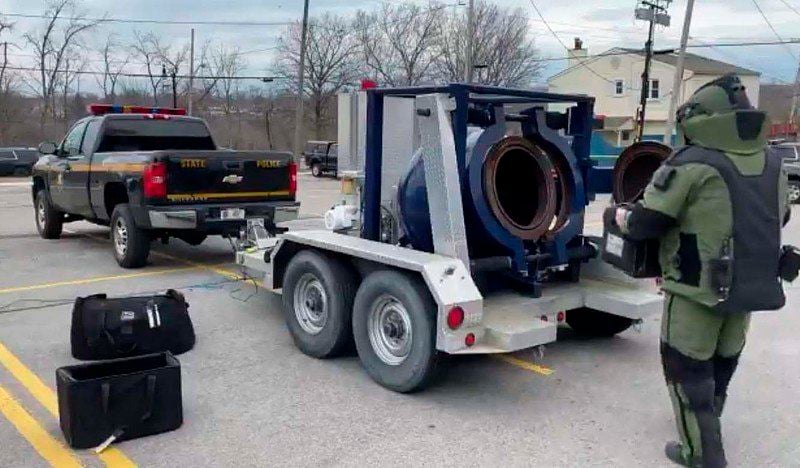 A member of the State Police Bomb Disposal Unit places a device in a mobile bomb containment chamber for transport out of the area.

A member of the State Police Bomb Disposal Unit brings a suspected explosive device out of a Cedar Avenue apartment on Thursday.

A member of the State Police Bomb Disposal Unit places a device in a mobile bomb containment chamber for transport out of the area.

In a message posted on Twitter, state police officials with Troop A said Cedar Avenue between Third and Fourth streets will remain closed while the home is processed by a Forensic Identification Unit.

One of those residents, Terri Granieri said when she got home from work on Wednesday afternoon she knew something was seriously wrong.

"I got home at 2 p.m. and there were police everywhere," she said.

The dozens of federal, state and local law enforcement officers surrounding the apartment building at 320 Cedar Ave., across the street from Granieri's home, could be seen flying a drone through the open front door of the building and then into a second floor apartment, through an open window.

By 6 p.m., police officers were knocking on Granieri's front door.

"They said, 'It's time to go. You gotta get outta here.'," Granieri said. "They asked if we had a place where we could go stay for a day or two."

Granieri and her husband went to their daughter's home, before eventually linking up with the Red Cross at the Harry F. Abate Elementary School. At that time, the law enforcement agencies wouldn't tell them why they were being evacuated form their home.

Hours later they learned that a neighbor had been using his apartment, across the street, to manufacture bombs.

"It was pretty scary," Granieri said. "I'm kind of glad we got out of the house. It was an experience. One I hope I never have again."

Gandia, who lived at the home at 320 Cedar Ave. where the explosives were found had been involved in a violent confrontation with New York State Police troopers Wednesday morning on the New York State Thruway near Silver Creek.

“A motorist reported that a driver had pointed a shotgun at him while driving westbound (on the Thruway) near exit 57 at Silver Creek,” State Police Major Jim Hall said.

A trooper was able to locate the driver involved in the incident, later identified as Gandia, and pulled him over. After stopping his pick-up, Gandia got out of his truck and confronted the trooper, as a second state police patrol arrived on the scene.

“When he confronted that trooper, he did not have a weapon in his hand,” State Police spokesman Trooper James O’Callaghan said.

But O’Callaghan said the suspect was aggressive and refused to obey orders from the trooper and began fighting with him. The trooper and the back-up patrol were able to subdue Gandia and took him into custody.

Both troopers were injured in the confrontation, with one suffering a broken hand while the other sustained several cuts. Both were taken to local hospitals for treatment.

After taking Gandia into custody, troopers found he had two guns in his possession, as well as a shotgun, and a ballistic vest. Investigators also located a package in the back of Gandia's pick-up.

A state police bomb squad responded to the scene and found a pipe bomb in the package.

The Thruway was closed-down both east and westbound for more than three hours while the bomb was disarmed.

Troopers, along with Falls police and agents from the FBI and the federal Bureau of Alcohol, Tobacco, Firearms & Explosives then descended on Gandia's Cedar Avenue apartment, where they executed a search warrant.

After flying a drone into the apartment, through an open window, troopers said they discovered “what appeared to be explosive devices” inside.

Police agencies closed-off the streets surrounding the apartment building and by Thursday morning, members of the State Police Bomb Disposal Unit could be seen bringing suspected explosive devices out of the apartment. The devices were then placed in a mobile bomb containment chamber, for transport out of the area.

By late Thursday afternoon, troopers had begun to allow the Granieris and 17 other evacuees back into their homes. Nearby Streets remained closed off as a State Police forensic team continued to work in the apartment building.

Granieri said neither she nor her husband were acquainted with their apparently bomb-building neighbor.

"We only really saw him occasionally and we never had a conversation with him," Granieri said.