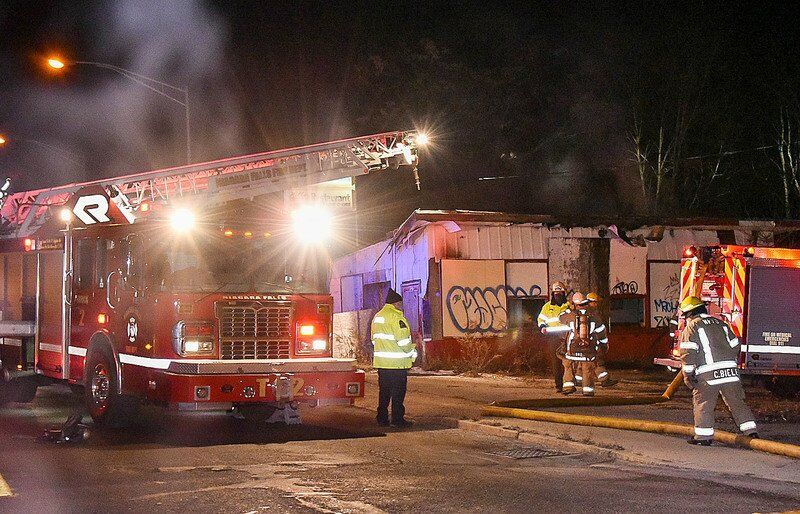 Falls firefighters on the scene of a fire at a vacant restaurant on Highland Avenue early Friday morning. 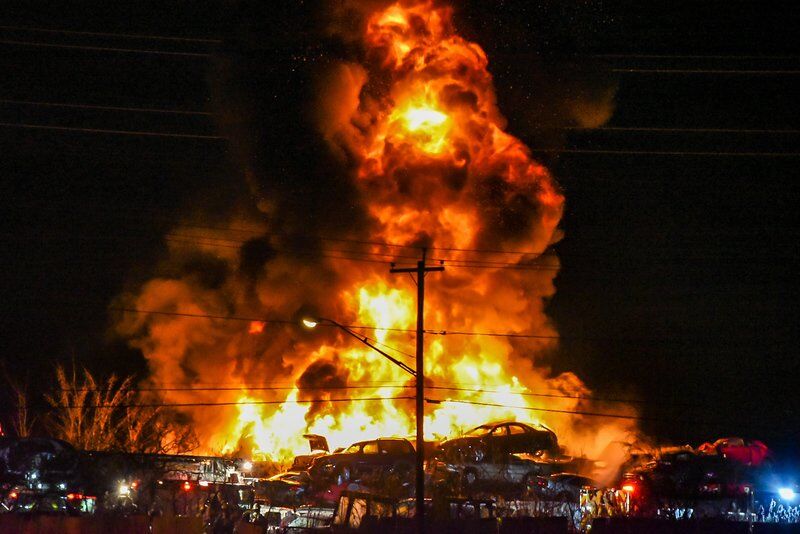 A fire broke out around 10 p.m. Thursday among junked cars at Page’s Automotive in the 4800 block of Lockport Road.

Falls firefighters on the scene of a fire at a vacant restaurant on Highland Avenue early Friday morning.

A fire broke out around 10 p.m. Thursday among junked cars at Page’s Automotive in the 4800 block of Lockport Road.

Falls firefighters had a busy Thursday night and Friday morning battling a trio of blazes across the Cataract City.

The first fire broke out around 10 p.m. when flames erupted among junked cars at Page’s Automotive in the 4800 block of Lockport Road. The blaze involved at least 30 junked cars and firefighters said they were initially hampered in fighting the flames because of what they called "the tight quarters" in the junkyard.

Crews also said they needed to bring in a front-loader to help separate the stacked cars and douse the flames.

Volunteers with Niagara Active Hose Company said just prior to the fire at the junkyard being reported, they had been called out to battle three so-called spot fires in fields nearby.

Fire investigators said the cause the blaze remains under investigation. They also said the spot fires have led them to label the source of the flames as suspicious.

Firefighters remained on the scene of the multiple alarm fire until 4 a.m. Friday.

About 90 minutes after responding to the Lockport Road blaze, remaining Falls firefighters responded to a fire in a vacant former restaurant building at Highland and Grove avenues. Rigs from the LaSalle fire station responded to the North End fire and quickly brought it under control.

Sources said the property had previously been marked for demolition but had not yet been torn down.

By 1:40 a.m. Friday, firefighters were back on the streets in the 1600 block of Weston Avenue for another fire. The blaze, in a vacant home, was reported by Falls police who had responded to the address for a report of a suspicious person breaking into the home.

When patrol officers arrived at the scene, they saw a man running from the home and flames coming from the second floor of the structure.

As firefighters fought the flames, police located a suspect who matched the description of the person who was seen fleeing from the home. He was taken into custody near 16th Street and Michigan Avenue.

The suspect is reportedly facing arson and burglary charges. The Gazette has been unable to confirm the arrest because Falls police say they have been directed to restrict media access to that information.