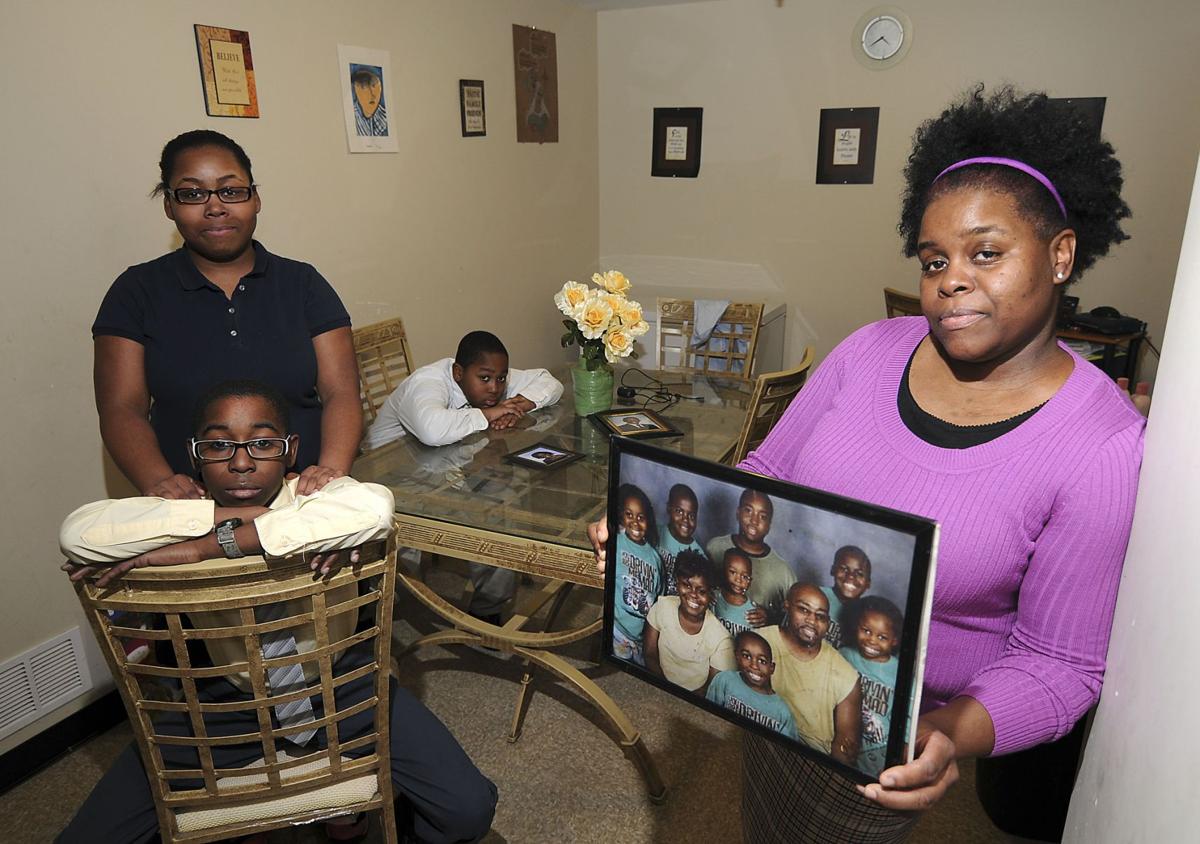 James Neiss/staff photographer PEOPLE OF THE PRISONER: Sharae Green, right, and her children, from left, Kajahmel, 14, Nyasia, 16 and Shamel, 11, have to deal with life without a husband and father, Melvin Green, in the photo third from right, who's currently in prison. Sharae will be participating in an event on Saturday at the First Unitarian Universalist Church of Niagara, 639 Main St., sponsored by Prisoners are People Too. 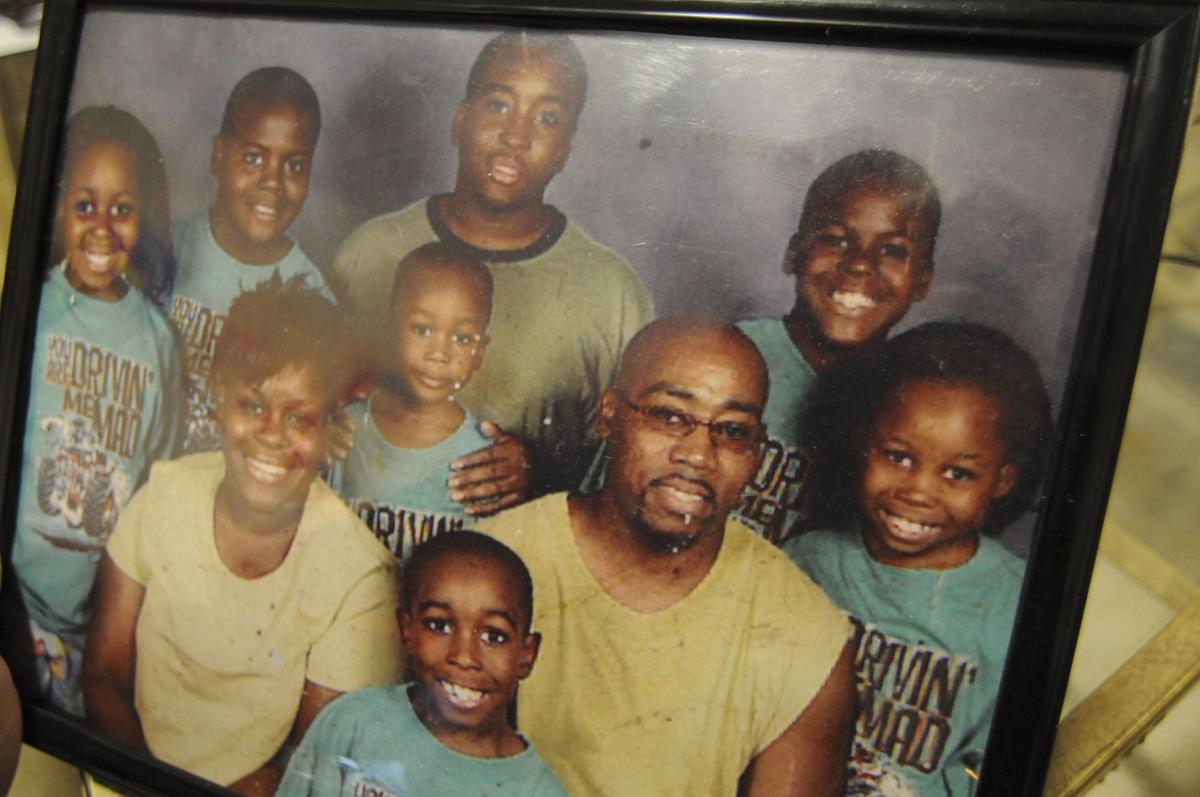 James Neiss/staff photographer CLOSE UP: Melvin Green, in this family photo second from right, is currently in prison for robbery and murder, leaving his family without a husband and father.

James Neiss/staff photographer PEOPLE OF THE PRISONER: Sharae Green, right, and her children, from left, Kajahmel, 14, Nyasia, 16 and Shamel, 11, have to deal with life without a husband and father, Melvin Green, in the photo third from right, who's currently in prison. Sharae will be participating in an event on Saturday at the First Unitarian Universalist Church of Niagara, 639 Main St., sponsored by Prisoners are People Too.

James Neiss/staff photographer CLOSE UP: Melvin Green, in this family photo second from right, is currently in prison for robbery and murder, leaving his family without a husband and father.

Tears stream down 11-year-old Shamel Green’s cheeks as he speaks of his father’s absence over the past six years.

“I feel bad when I hear other kids talking about how their dads spend time with them and how they do fun things together,” he said. “I know if my dad was here he’d do those things with me too, but he’s not.”

Shamel, along with his six siblings, is dealing with the reality of his father’s imprisonment since 2007. His father is currently serving a life sentence at Auburn Correctional Facility for a felony conviction due to his involvement in a New York City shooting.

The Green children’s fondest memories of playing basketball and working on homework with their father after school have turned into a rarity to occur only when the family is able to travel to visit him a few times a year at the prison.

Shamel’s mother, Sharae Green who was working as a school teacher in NYC uprooted her family and relocated to Western New York where they had family and were able to be closer to her husband. She speaks of the immense impact it has had on her family since day one.

“My children are trying to cope with their father’s imprisonment the best they can, but it’s very hard on them. There are feelings of sadness, anger, disappointment,” she said. “They had a really good relationship with him and they still love him very much but they’re very hurt he’s not here.

“When this first happened I didn’t know what to do or where to go. We all needed somebody to talk to, some way to cope to get through this thing that we never imagined could happen.”

The Green children are not alone.

New York state is home to an estimated 105,000 children with a parent serving time in prison or jail.

PRP2’s current initiative focuses on the innocent and often times uninformed bystanders: the children of these incarcerated individuals. On Saturday the organization will be hosting the conference “It Takes A Community: Supporting Children of Incarcerated Parents” at the First Unitarian Universalist Church of Niagara.

Claudia Racine, facilitator for the Niagara County chapter of PRP2, hopes the conference will open up a dialogue in Niagara County on working together as a community to create a better understanding of the issues these children are dealing with and how to provide them the proper resources so they receive the support they need.

“The purpose of the conference is to focus on the impact of incarceration of a parent on children such as the trauma of witnessing a parent’s arrest; how these children are at greater risk for mental health issues, self-esteem issues, failing or dropping out of school; it also will focus on the difficulties and challenges to grandparents and other family members who are now raising these children and, the children who end up in foster care,” she said.

Green believes increased awareness of support outlets would have helped her children feel comfortable talking about such a difficult situation that often carries much stigma in society.

Green’s 14 year-old son Kajahmel, a ninth-grader at Canisius High School was 8 years old when the police came to the house to arrest his father. A few years older than his younger brother, he understood more but was left with an overwhelming sense of unsureness.

Racine hopes the conference will bring together members of the community who are open to taking a more proactive approach to looking at the issues these children are dealing with and pull together ideas to give these children a voice.

Keynote speakers for the conference will include representatives from the Osborne Association of NYC which has pioneered unique rehabilitation programs since 1931 for individuals who have been in conflict with the law and the families affected by the incarceration of a loved one.

They will discuss the organization’s vision to realize a world in which children such as the Green family, whose parents are involved in the criminal justice system are considered, supported, accepted for who they are; not their parent’s choices, and their needs met. This includes the Children’s Bill of Rights which ensures children the proper safety, information, and support surrounding their parent’s arrest.

“The question, now becomes how can we as a community develop programs to help these children.

If our children are our future then it’s really our responsibility to provide them the best we can to help them through difficult times,” Racine said.

IF YOU GO n WHAT: Prisoners Are People Conference n WHEN: 10 a.m. to 1 p.m. n WHERE: First Unitarian Universalist Church of Niagara 639 Main St. n FOR MORE INFO: For more information visit www.prp2.org