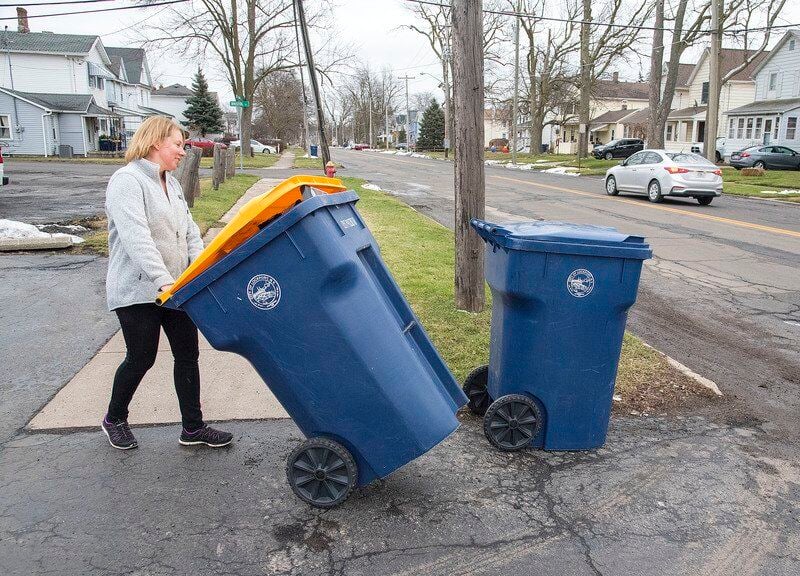 Lockport's Sherri Benedict rolls out a recycling bin for pickup this week in front of the Park Avenue business she works at. 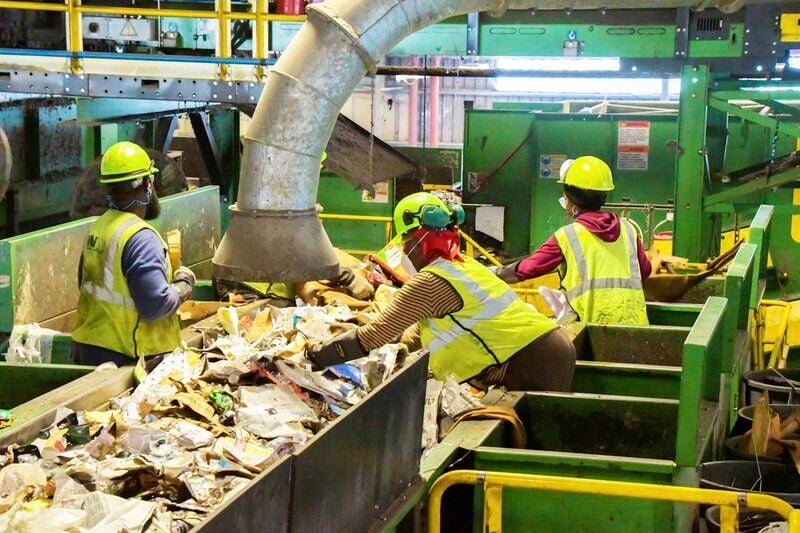 Lockport's Sherri Benedict rolls out a recycling bin for pickup this week in front of the Park Avenue business she works at.

So, you think you know everything there is to know about recycling your garbage? Then answer this question: Which of the following items should you place inside your (yellow-topped) recycling bin at the curb?

If you didn't say the correct answer, which is “none,” then you are probably inadvertently contributing to the problem of disposing contaminated recyclables — something that's not only taking up much-needed landfill space, it's making renewable materials a lot less marketable.

According to Waste Management, which the Town of Lockport presently contracts with for curbside garbage pickup, four fifths of all garbage picked up in Lockport today is trash. Of the 20% recyclables remaining, about a quarter of that is contaminated and ultimately landfilled as well.

Lori Caso, public affairs representative for WM, said Western New York's numbers are much better than national averages, which indicate as much as 20% of all recyclables picked up at the curb are contaminated.

Over the past three years, new rules have been put into place regarding what's recyclable and what isn't in Niagara County and across the United States and world.

It began in 2018 when China, the global hub for recyclable materials, announced it would begin banning imports of mixed paper and plastics.

China was using the inexpensive materials as cheap fuel, while reprocessing some of it as recycled paper and cardboard.

Contaminated recyclables include chemical-coated, waxed cardboard boxes — mostly used by retailers for shipping produce — that can take up to 50 years to break down in a landfill.

Caso said China’s newest policies, based on environmental and economic concerns, has created a ripple effect. Operating costs at transfer stations like the one WM operates in Liverpool, used to separate renewable products that include cardboard, paper and plastic, have increased.

“The average commodity price for all recyclables sold from all our (transfer stations) is roughly 70% less than the average three years ago,” she said.

Most garbage picked up at the curb locally, including in the City of Lockport, is buried 30 miles away at Modern Disposal's landfill in Lewiston. Recyclables are taken to Modern's transfer station in Depew for sorting.

Just two county municipalities, including the Town of Lockport, have their garbage picked up by Waste Management and trucked about 130 miles east to Syracuse. WM is the top recycling company in North America, Caso said.

“Our education efforts are making a difference and they've helped reduce contamination levels to about 5% in Western New York,” she said.

Some local residents and businesses are openly frustrated by the fact that they're forced to continue to tediously recycle their garbage at the curb only to find out it's not all being recycled.

Alderman Mark Devine said residents should continue to separate paper, plastic, cardboard and other materials from their curbside garbage.

“I understand that some people are frustrated and p----- off and I don't blame them,” Devine said.

“However, to stop recycling is not the answer because we as individuals have to continue to do our part every day and right now, that means still putting recyclables in recyclable cans, even though we know some of it is being buried.”

Lockport Town Supervisor Mark Crocker said when the bottom dropped out of the recycling market a year and a half ago, he reached the conclusion that even if was not profitable, the town should continue to recycle.

“The markets may be down now today and some recyclables are going into landfill, but the market will recover sooner or later, so we can't stop recycling,” Crocker said.

“We've made a strong effort in the town to recycle only clean items. Our mantra remains, “If in doubt, throw it out."

RECYCLABLE, YES OR NO?

Recyclable items include paper, newspapers, corrugated cardboard and milk/juice cartons, along with specific types of plastic, metal cans and bottles.

“We're seeing a lot more contamination in bins,” she said.

“Some people think everything thrown into the trucks is getting trashed and that's not true. Some trucks have one side for trash and another for recyclables. Also, if a driver picks up your recycling bin and it's full of contamination, then he can not take it to the (transfer stations).”

Modern and WM continue to ship recyclable plastics and paper to China, but have had to invest more heavily in their sorting centers in recent years, she said.