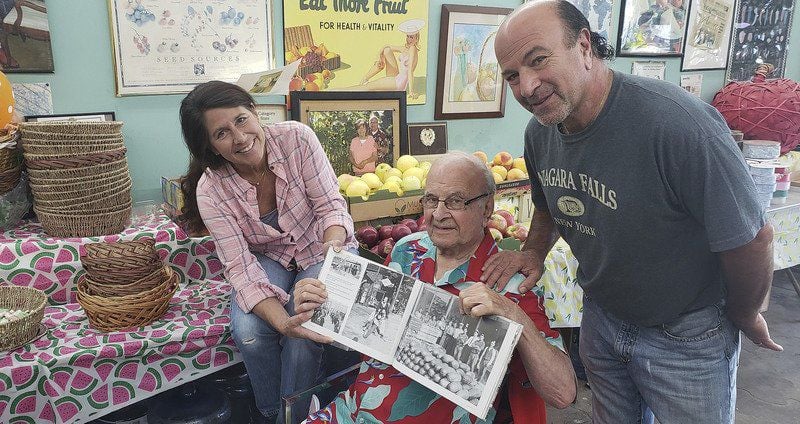 Lorrie Grana, left, and her husband, Ted at right, stand next to Julian Grana, 90, who holds a book showcasing T. Grana and Son’s first storefront on Niagara Street. The Pine Avenue fruit and produce distribution company is celebrating 100 years of business in Niagara Falls. 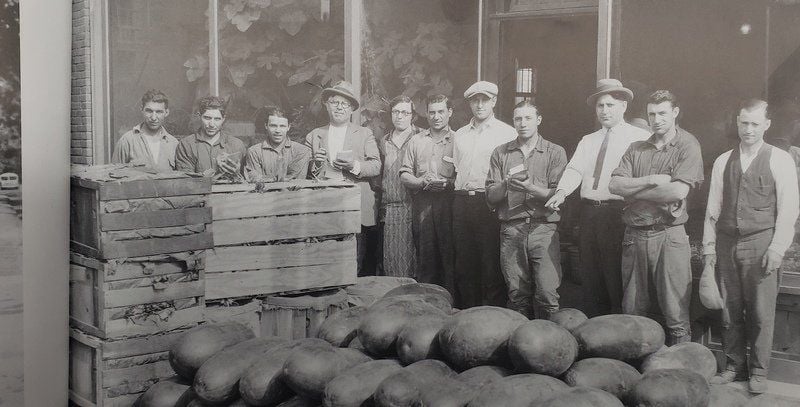 Ted Grana, shown in the cap, stands with others in front of his produce store, Grana Brothers, which he started with his brother in 1919, and which was formerly on East Falls Street and two other locations. The business, now named T. Grana and Son on Pine Avenue, is celebrating 100 years.

Lorrie Grana, left, and her husband, Ted at right, stand next to Julian Grana, 90, who holds a book showcasing T. Grana and Son’s first storefront on Niagara Street. The Pine Avenue fruit and produce distribution company is celebrating 100 years of business in Niagara Falls.

Ted Grana, shown in the cap, stands with others in front of his produce store, Grana Brothers, which he started with his brother in 1919, and which was formerly on East Falls Street and two other locations. The business, now named T. Grana and Son on Pine Avenue, is celebrating 100 years.

Julian Grana has been selling produce for nearly all of his life. And he wouldn’t have had it any other way.

“I’ve loved every day,” he said of his life’s work at T. Grana and Son, which is celebrating 100 years in business.

His life story overflows like a cornucopia with fresh fruits and vegetables. His mother went into labor for him while she was selling produce at the Niagara Falls City Market. He was about 7 years old when he started helping his father, Ted Grana, with the family business.

These days Julian, who turned 90 in September, is doing pretty much the same thing he’s done since he was very young. He’s working with the fresh fruits and vegetables that come and go through the doors at the Pine Avenue storefront where his son, Ted and Lorrie, Ted’s wife, keep the century-old business running smoothly.

Julie, as he is nicknamed, now mostly puts the fruit baskets together, which still comprise about 10 percent of the Grana’s business, and he’s enjoying it more than ever. “I love people. I talk to people about old times. Everybody who walks in I say, ‘Where you born?’ and then I start. And I can’t stop.”

It was 1919 when his dad Ted started the business with a horse and buggy. Ted was only 19 back then and his older brother, John, soon joined him to assist in the fruit and produce delivery business which they named Grana Brothers. The brothers went to the markets every morning in Buffalo to buy the freshest produce and delivered their purchases to hundreds of homes and businesses in Niagara Falls and surrounding areas. Eventually there was a storefront at 1314 Niagara St., then a store on East Falls Street, then a two-car garage on Fort Avenue and finally, 33 years ago, the current storefront at 2610 Pine Ave.

Overall, it’s been an abundant life for Julie Grana and his wife, Annabelle, who he met when they were attending South Junior High School. They later married but had to cut their Florida honeymoon short because he was drafted during the Korean War. Their first child, Julie Ann, was born in Niagara Falls while he was serving in Germany and he missed home the whole time he was away. There were two more kids, Ted and Karen, and all of them helped out at the store as they were growing up, as did the eight grandchildren.

Julie Ann Grana, a retired Niagara Falls School District teacher, still helps make fruit baskets at Christmas each year, as she has done throughout her life. “We first started making them in my grandparents basement,” she said, adding “Then in our basement. As the business grew we needed to rent store fronts and the whole family was involved ... One Christmas we were so busy we couldn’t get to church on the Sunday before Christmas so the priest from our parish came and said Mass at the store.”

Karen Grana, who still works in the city schools as a pupil service assistant, remembers delivering the fruit baskets with her sister, Julie, saying “If you were a Grana, you were going to work.” She also remembers her dad hiring people who were down on their luck, and many days when Grana employees were invited to join the family at the dinner table. The sisters attribute their work ethic to their father. “My dad is the best,” Karen said.

Today T. Grana and Son has five trucks and delivers produce near and far, including to a variety of local restaurants such as Michael’s Restaurant, just down the street on Pine Avenue, where second-generation owner Michael Capizzi, says of the Grana’s, “It’s another example of hard work and legacy sustaining in Niagara Falls.”

Several customers contacted by this newspaper offered Kudos to the old-fashioned customer service that Grana’s provides. The new owner of LaHacienda on Pine Avenue, George Satarian, kept everything at his restaurant pretty much the way it was when he purchased it after the death of long-time owner Aldo Evangelista, including keeping Grana’s on as a produce provider. Satarian said he has known Julian Grana for most of his life and praised the service provided by the Granas, saying of Ted Grana, “I call him Wednesday morning with my order and within a half hour, it’s at my door.”

The owners of Dick and Jenny’s on Grand Island hired Grana’s when they opened their New Orleans-influenced restaurant on Love Road about 10 years ago. They’ve stayed with the produce distributor since because the company goes above and beyond, particularly in sourcing locally grown produce, according to co-owner, Jenny Benz.

“If I’ve had a crazy night and sell all my produce, Ted’s got my back,” Benz said, adding that the reliable and swift service “allows us to give awesome fresh produce and fruit to the customers.”

The current co-owners, Ted Grana and his wife Lorrie, met in high school and Lorrie pretty quickly began helping out at the store and at the city market when Grana’s had a booth there. Ted has spent his life in produce, much like his grandfather Ted and his father Julian. Though he graduated from Niagara University with an accounting degree, he realized he really didn’t want to be an accountant and returned to the family business with Lorrie’s encouragement. The business “exploded” about 20 years ago when Ted went out and got contracts from the Seneca Niagara Casino and three area colleges, Niagara University, Buffalo State and Niagara County Community College.

While things continue to change at T. Grana and Son, “We’re busier than ever,” Ted said.

Anna M. Muscarella, 90, of Niagara Falls, NY, passed away peacefully on January 21, 2020 at Elderwood of Wheatfield in Wheatfield, NY. Born in Avon, NY, she was the daughter of the late Ignazio ("Leonard") and Mary (Zanghi) Muscarella. Anna came to the area as a child with her family, and gr…