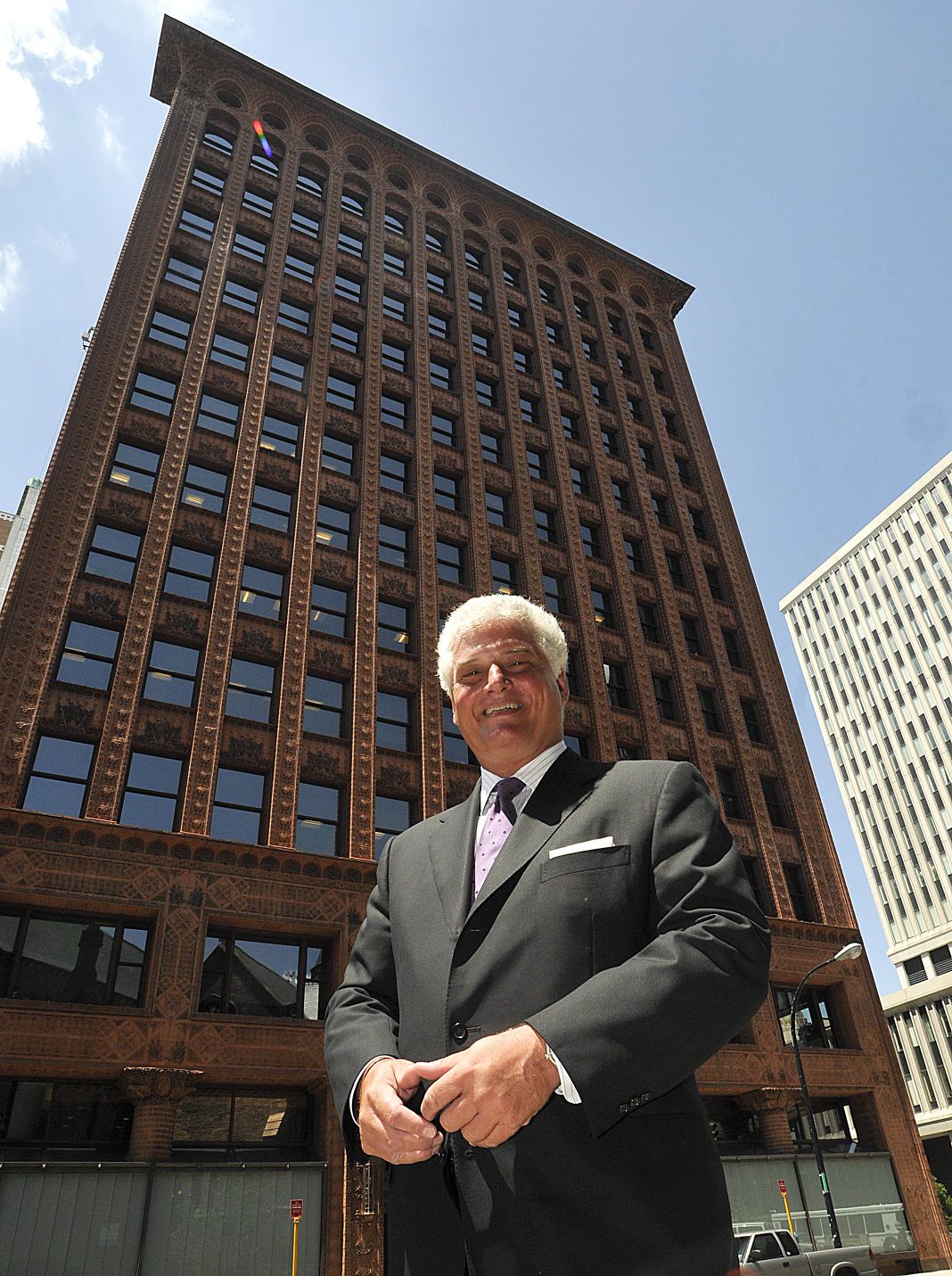 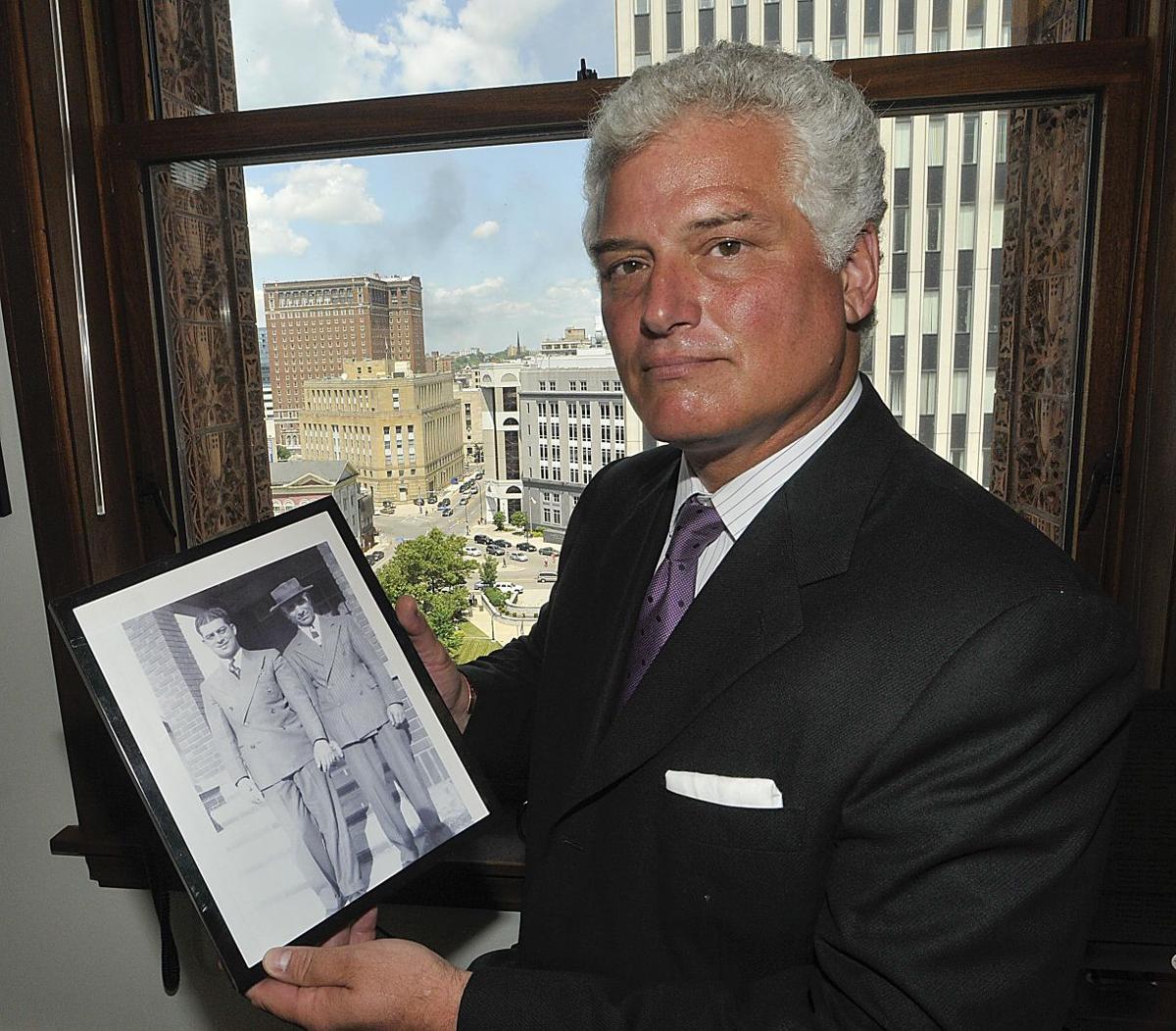 James Neiss/staff photographerNiagara Falls, NY - A bricklayers son and LaSale Class of 1974 graduate Daniel Oliverio was recently named Chairman of the law firm Hodgson Ross Attorneys in Buffalo. Here, he holds a photo of his father and grandfather in front of their 19th Street home, that he keeps on the desk in his office.

James Neiss/staff photographerNiagara Falls, NY - A bricklayers son and LaSale Class of 1974 graduate Daniel Oliverio was recently named Chairman of the law firm Hodgson Ross Attorneys in Buffalo. Here, he holds a photo of his father and grandfather in front of their 19th Street home, that he keeps on the desk in his office.

Sitting in his corner office in the historic Guaranty Building in downtown Buffalo, Dan Oliverio admits he’s come a long way from growing up in the LaSalle section of Niagara Falls.

“My first day (as a lawyer at the Buffalo law firm Hodgson Russ), I was scared to death,” Oliverio said with a wide smile. “It wasn’t even a dream to be sitting where I am now.”

Where he’s sitting now, besides in an overstuffed leather chair, is the chairmanship of a law firm that dates back to 1817 and counts two former U.S. presidents, a congressman and president of the World Bank and a former assistant secretary of the United States Treasury as its one-time partners.

It’s heady stuff for the son of Antonette (Quarantillo) and Ernest Oliverio. His dad was a bricklayer and his mom worked in housewares at Jenss’.

Oliverio was born at Falls Memorial Medical Center in 1956 and he is a proud product of the Niagara Falls public school system.

“I went to public schools and graduated from the old LaSalle High School,” he said. “(The Falls) was a good place to grow up. The plants were going full blast. It was a solid middle class city.”

From LaSalle High, Oliverio headed to the University of Rochester and then the University at Buffalo. Never straying too far from home, he got an undergraduate degree in engineering, a Masters degree in Business Administration and his law degree all at UB.

“I made a decision when I got out of law school to stay local,” he said.

It was his way to repay the educational opportunities he found here.

“The great public university here made it within my reach financially (to go to graduate and law school),” Oliverio said. “We are so fortunate. If a kid wants (a good education) it’s here for them.”

Even though the Falls was going through tough changes, Oliverio believes he made the right decision.

In 1982 Oliverio went to work at Hodgson Russ. At that time, there were 68 lawyers practicing in the firm’s Buffalo office.

“I thought I had the greatest job in the world because they were paying me $28,000 a year,” Oliverio said with a smile. “It was a great place to learn to be a lawyer.”

Oliverio set about learning to practice law, trying cases and working in just about every facet of the firm’s practice.

“He offered me the opportunity to try cases in federal court,” Oliverio said. “For a young (lawyer), the chance to work in federal court every day was like winning a scholarship. And you were there on behalf of the United States. It was thrill.”

There, Oliverio had the chance to work side-by-side with future county district attorneys like Frank Clark and Matthew Murphy, future U.S. Attorney Michael Battle and he crossed paths with a young defense lawyer, Joseph Sedita.

“I knew Dan slightly and we always had a friendly relationship,” Sedita recalls. “And then we tried a case against each other, and he won.”

Sedita is now one of Oliverio’s partners at Hodgson Russ.

“He’s a multi-talented guy,” Sedita said. “He’s an extraordinarily smart guy and a keen listener. It’s wonderful to practice law with him. He’s going to be a great leader of our firm.”

After five years as a federal prosecutor, Oliverio came back home to Hodgson Russ. They even gave his old attorney number, 168, back.

“The firm has grown beyond anyone’s expectations,” Oliverio said. “I never imagined we’d get (this large). I thought 68 lawyers was enormous.”

Oliverio says the in his time there, the firm has grown organically and ‘never sacrificed our culture.’ ”

Oliverio also points to the firm’s community commitments and inclusiveness. It added its first female partner in 1963 and Hodgson Russ lawyers are involved in all the region’s cultural, not-for-profit and charitable organizations.

“That is part of our culture that will never go away,” he said. “You will always see us in our communities.”

As for his new role, Oliverio sees it as “serving my partners.”

They decide where the firm goes,” Oliverio said. “We operate by consensus. My first job is to be a  Hodgson Russ partner. My second job is to be the chairman.”